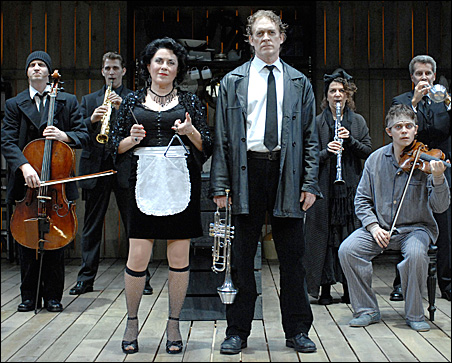 If you’re planning to see the touring production of “Sweeney Todd” that opens Tuesday at the State Theatre in Minneapolis, there’s no need to bring along a plastic raincoat to protect against blood splattering.

You’ll discover that this stage version of Stephen Sondheim‘s musical is significantly different from the gruesomely bloody film by Tim Burton that recently captured three Academy Award nominations, including best actor for Johnny Depp’s performance as the demon barber of Fleet Street. For one thing, the stage show is a lot less gory — at least visibly, though it still has a higher body count than “Hamlet.”

Even so, the film and various incantations of the stage version all reveal a malleable quality to Sondheim’s show — something that wasn’t at all apparent in 1979 when it was staged on Broadway like a colossal Wagnerian opera. Hal Prince, fresh from staging a staggeringly huge production of “Evita” in London’s West End, turned the Uris Theater in New York into a giant, dank Victorian factory, complete with massive geared machines and a steam whistle that shrieked while throats were slashed.

It took big stars to upstage the set — but they were there: Len Cariou as an explosively murderous Sweeney and Angela Lansbury as the gleefully amoral Mrs. Lovett, whose shop served up meat pies to die for. The performance thundered with a Dickensian rage about class warfare — the privileged devouring the masses — but there was also high macabre humor about the whole business and the killings were handled, for the most part, like a grisly farcical ballet.

It was Grand Guignol to the max. I remember leaving the theater with my ears ringing and my eyes watering and thinking that I’d never see the show again in that epic size. In a way, I was right.

What you’ll see at the State Theatre is more like petite guignol — and if it’s anything like the revival production that ran on Broadway a few years ago, there’s plenty to recommend it. This “Sweeney” is the touring version of director John Doyle‘s clever poor-theater staging, set in an insane asylum with the horror tale being told by the inmates. They not only put on the show, but also play all the instrumental parts onstage. 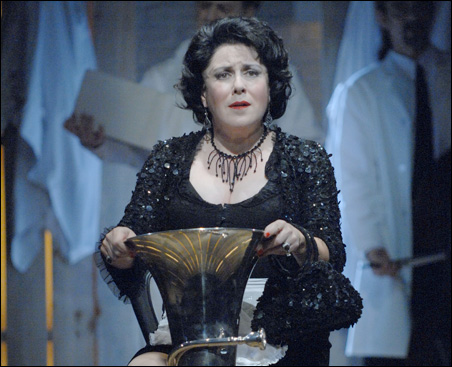 DavidAllenStudio.com
Judy Kaye, who was Patti LuPone’s back-up as Mrs. Lovett in the 2005 Broadway production, plays a character known for serving pies to die for.

In a way, it’s a return to the story’s origins, which go back to early 19th century England, at the very least. Sweeney Todd, the mad razor-wielding barber, was an English boogeyman. He first showed up in literary form in Thomas Prest‘s 1846 story, “The String of Pearls: A Romance,” which took its title from the necklace used to strangle a victim.

Until much more recently, Sweeney was just your run-of-the-mill homicidal maniac with a barber chair. In 1973, however, British playwright Christopher Bond wrote a much different version for an experimental theater company that portrayed Sweeney as the victim of a gross injustice who is driven mad when his plan for revenge is thwarted. There’s tragedy behind his madness and, in the end, he unwittingly slaughters those most dear to him — a thoroughly appropriate denouement for grand opera.

Of course, the question arises: After Johnny Depp’s Beethoven-like Sweeney, will folks want to see the story told again? That remains to be seen, but those who attend the tale at the State Theatre will see something quite different from the Sweeney they’ve come to expect. 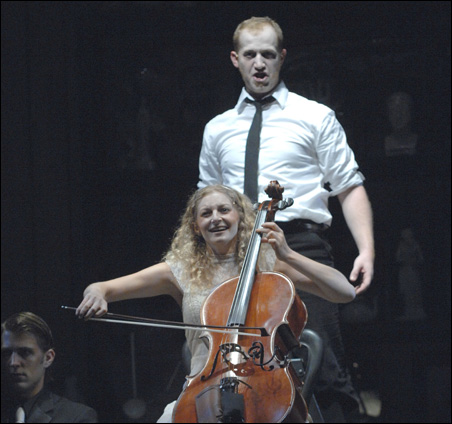 DavidAllenStudio.com
Lauren Molina portrays Johanna, daughter of Sweeney Todd, and Benjamin Magnuson is Anthony, her admirer and a shipmate of her father’s.

Here’s the opening chorus of the musical:

“Attend the tale of Sweeney Todd
His skin was pale and his eye was odd
He shaved the faces of gentlemen
Who never thereafter were heard of again
He trod a path that few have trod
Did Sweeney Todd
The Demon Barber of Fleet Street.”

Touring ‘Sweeney Todd’ might be a cut above the rest