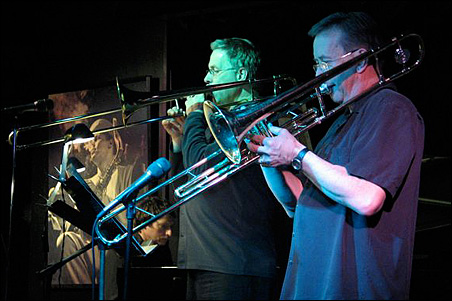 Photo by Pamela Espeland
Peter Schimke, at the piano, and Dave Graf (center) and Brad Bellows of Valves Meet Slide belt it out at the Artists’ Quarter last fall in St. Paul.

The unhappiest day of the year is almost here. Thanks to Welsh psychologist Cliff Arnall, who developed an equation that factors in bleak weather, Christmas debt, failed New Year’s resolutions and other glum variables, the first Monday of the last full week of January is designated Blue Monday. This year, it falls on Jan. 21.

Don’t despair — prepare. Spend part of Sunday the 20th at the Artists’ Quarter and stock up on bonhomie for Monday and beyond.

The AQ is hosting its first Sunday Afternoon Jazz Party starting at 3 p.m., complete with free hors d’oeuvres. On stage: Valves Meet Slide, a quintet with two trombones and a killer rhythm section.

I first heard this group last November and I liked them a lot. The music is upbeat and warm — jazz standards you’ve probably heard before, but on different instruments. You can see them perform here.

Not your typical jazz horn
The trombone is not the first horn people associate with jazz; that would be the saxophone or trumpet. But it’s an instrument with a great range and mellow sound. Usually you’re lucky to hear one in a jazz ensemble. Slide Hampton, Robin Eubanks, J.J. Johnson, Steve Turre and Delfeayo Marsalis have all helped to popularize the horn with the big reach. Hearing two at the same time is a rare treat.

In Valves Meet Slide, Dave Graf plays the trombone most people are used to seeing, the one with the slide. Brad Bellows plays valve trombone, which uses valves (like a trumpet) instead of a slide to lengthen or shorten the pipe and create the notes. (Trombone trivia: The late Maynard Ferguson played a trombone with both valves and a slide. He called it Superbone.)

Bellows is the founder of Locally Damaging Winds, the Midwest’s preeminent jazz trombone septet; earlier this month, they played to a near capacity crowd at the Bloomington Arts Center. Graf can be heard with the Latin ensemble Salsa Del Soul every Thursday night at the Times Bar and Café in Northeast Minneapolis. His musically varied background includes big bands, Brazilian music, A Prairie Home Companion, and a long association with the late trumpeter Red Wolfe in his Port of Dixie Jazz Band and the Ellington Echoes. Graf has also performed with Dizzy Gillespie, Slide Hampton, Jack McDuff, and the Woody Herman Orchestra.

It was Bellows who suggested to Graf that they get together and jam. “We started doing that for the heck of it,” Graf says. “I like to practice with someone else, give and take, bounce ideas around. After we’d done that a couple of times, Brad said, ‘Let’s try and get a gig.’ Next thing I knew, we had a booking at the AQ.” That was last summer. The Sunday Afternoon Jazz Party will be the fourth time Valves Meet Slide has performed in public.

Both men have fond memories of the Emporium of Jazz in Mendota, where the Hall Brothers New Orleans Jazz Band played for 25 years. “They had a Sunday afternoon show,” Bellows says, “and it was fun.” Bellows and Graf have day jobs, as do most of their family members and friends. “People with day gigs don’t want to go out at night during the week,” says Bellows. “A Sunday matinee will give more people a chance to see the band.”

They will have a set list but don’t yet know what will be on it. “We play what we like, a variety of stuff, and we try to sneak in a couple of new songs every time we play,” Graf says. “We keep it pretty loose.”

Back-up from a dream team
In addition to his valve trombone, Bellows will bring his euphonium — basically a small tuba. (Its name comes from the Greek word euphonos, meaning sweet-voiced.) Graf and Bellows will be backed by a local dream team: Peter Schimke on piano, Gordy Johnson on bass, Mac Santiago on drums.

Bellows will supply the hors d’oeuvres. He’s thinking crackers and cheese, chips and dips, the sort of thing you’d eat anyway if you were at home in front of the TV. The bartender at the AQ (maybe Dan, maybe Dave) will pour the club’s famously generous and reasonably priced drinks. And Davis Wilson the doorman will take your money, about what you’d pay for a movie.

The AQ’s doors are seldom open on Sunday afternoons. An earlier exception was last July 15, when a singer’s showcase for the Jazz Vocalists of Minnesota packed the house. Graf laughs when I remind him of that. “Those were singers, we’re trombones,” he says. But good music is good music, and that’s what you’ll hear if you go.

Slide Huxtable Quartet featuring Mark Miller: I’ve never heard of a jazz group playing three local clubs in the same week. Maybe one day Orchestra Hall and the Schubert Club could share a soprano? This very interesting quartet — all former members of the Motion Poets — includes Mark Miller on trombone, Chris Bates on bass, and J.T. Bates on drums, with guitar wizard Dean Magraw stepping in for regular group guitarist Bill Bergmann. Earlier this week, they played the Clown Lodge (in the basement of the Turf Club) and then the Artists’ Quarter. Tonight they’re on the Dakota’s late-night bill. The Dakota, 11:30 p.m. Friday, Jan. 11 ($5).

Roseville Winter Jazz Blast: It’s the 150th birthday of the state of Minnesota, and we’re finally getting a state birthday song. The Roseville Winter Jazz Blast commissioned one by Dean Sorenson, director of jazz studies at the University of Minnesota; the song will have its premiere at this day-long festival for middle and high school jazz ensembles hosted by Northwestern College in Roseville. Come for the closing concert with the JazzMN Big Band, Judi Donaghy, and T. Mychael Rambo. 7:30 p.m. Saturday, Jan. 12 ($7-$17). Call 651-631-5151 or 866-821-5151.

Improvised Music at Homewood Studios: Every two months, this artists’ workspace and community gallery in North Minneapolis hosts an evening of improvised music. In their words, “It’s not your regular Lake Harriet Bandshell evening.” That’s for sure. This month features Milo Fine on drums and bowed cymbals, Davu Seru on drums, John O’Brien on trumpet and flugelhorn and Stefan Kac (of the Pan-Metropolitan Trio) on tuba. Homewood Studios, 7 p.m. Monday, Jan. 14 ($5).