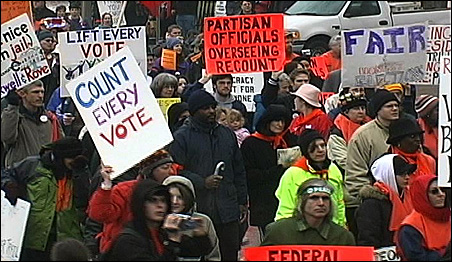 Would you trust a black box with your presidential election vote? What if the black box was manufactured by a private company with close ties to the Republican Party and its presidential nominee in particular? What if the box contained a cheap lock to a side door through which its counting procedures could be easily reprogrammed or disabled?

You don’t have to be a conspiracy theorist — or a black box designer — to recognize that there were numerous and striking irregularities in the past two presidential elections, and that combined they give new meaning to the term “national security.”

These irregularities, and what they mean to American democracy, are the subject of “Uncounted: The New Math of American Elections,” a feature-length documentary by Nashville-based filmmaker David Earnhardt. He will introduce the Minnesota premiere of the movie and answer questions at 6:45 tonight at the Riverview Theater in Minneapolis.

Timed to precede the Minnesota presidential caucuses next Tuesday, the screening is hosted by Citizens for Election Integrity Minnesota and the voting-rights division of the Minnesota Unitarian Universalist Social Justice Alliance.

Earnhardt, who has worked in film and video for 30 years, was inspired to make the film by the wide discrepancies between results of exit polls and tallied votes, and by the lack of coverage of these discrepancies in the mainstream media.

Though the film’s promotional materials acknowledge the influential story by Robert F. Kennedy Jr. in Rolling Stone, the film doesn’t attempt to argue that the issues were completely unrepresented in the establishment press. In fact, Earnhardt makes ample use of network television reports of the unreliability of electronic voting machines in the months preceding the 2004 election. But those reports seem to have diminished to the point of nonexistence only hours after the long night of Nov. 4, 2004.

Organized to outrage
“Uncounted,” whose points are well organized to cultivate viewer outrage, features interviews with journalists, computer programmers, statisticians, election officials, disenfranchised voters, and whistleblowers such as Clint Curtis, a software engineer who testifies by sworn affidavit that he had been contacted by George W. Bush ally Tom Feeney to create a “vote-flipping” program.

Then there’s California law office temp Steve Heller, who transcribed a tape with “smoking gun” evidence of illegal software knowingly designed by Diebold Election Systems, and paid a price for it ($10,000 to be exact). And there’s the late Athan Gibbs, an African American activist and entrepreneur who was killed in March 2004 in a head-on collision with an 18-wheel truck just after his electronic voting machine company TruVote, whose machines provided paper receipts, signed a deal with Microsoft.

Earnhardt’s film is pointedly infuriating, not least when it uses the simplest mathematical equations. In one Ohio county, 600 people voted and some 4,200 votes were counted — for Bush. Many talking heads in the film testify to the targeting of particular groups, including working people of color in historically Democratic strongholds. One expert argues convincingly that the electronic voting machines are less sophisticated, transparent, and reliable than the average Xbox 360.

Focusing primarily on issues in the ’04 election, “Uncounted,” also available on DVD, is a worthy addendum to executive producer Robert Greenwald’s “Unprecedented: The 2000 Presidential Election.” Its release in another presidential election year is clearly intended to encourage the vigilance of voters on any side of the political spectrum, and ends by urging the viewer to contact his or her congressional representative to work against the continued proliferation of black boxes —otherwise known as paperless electronic voting machines.