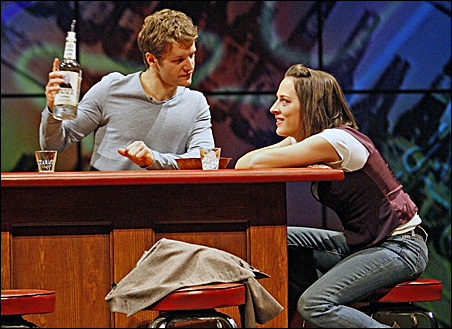 Photo by Michal Daniel
Tony Clarno, who plays Third in “Third,” rants about his treatment by his professor with Emily Gunyou Halaas, who plays (who else?) the daughter of his tormentor.

Editor’s note: If you saw “Third,” what did you think of it? Did you gasp at the moment that Ed Huyck describes? Please comment below.

In an age when a top-selling rap artist can use a once-forbidden epithet as the title of his new album, it’s tough to get a strong reaction from foul language. Yet deep into “Third,” the Guthrie Theater production of the late Wendy Wasserstein’s final play, there is a moment that caused gasps the evening I saw the show.

Woodson Bull III (dubbed Third), an out-of-place student at a swank, liberal East Coast college, has been accused of academic fraud for his paper about Shakespeare’s “King Lear.” Even after Third is exonerated, the episode continues to taint his life.

While working at a bar one night, Third (played by Tony Clarno) unloads all his pain and anger on a “townie” — who, in the way things work in plays, happens to be the daughter of his tormentor. At the end of the rant, he calls his professor (played by Sally Wingert) the forbidden c-word.

It really is a shocking moment, in part because we sympathize with Third. He has been stereotyped from the moment he arrived on campus and thus far appears to be a bright and nice guy. Yet his language shows us that Third has paid attention to his lessons from the misogynist society the professor rails against as a leading campus feminist.

No complaints yet
“I love it when the audience gasps. It doesn’t happen that often, so it’s cool to get a big reaction like that,” says Casey Stangl, director of the play. “If they’re well written, the language is character-based and therefore true. That’s the only thing I care about.”

Besides, the slur is in the original play by Wasserstein, who won a Pulitzer Prize in 1989 for “The Heidi Chronicles.” Guthrie spokesman Lee Henderson reports that so far no theater-goer has complained. 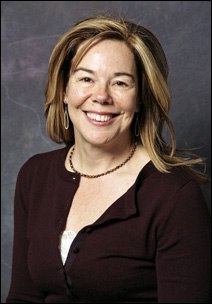 The shocker arrives in perhaps the most-revelatory scene in Wasserstein’s inquisitive and heartfelt play. Though the playwright focuses much of the energy on Laurie, whose presumptions about politics, people and life are rocked throughout the play, Third also emerges as a fully realized and complex character. A bright, middle-of-the-road guy from Ohio, Third has come to the school on a wrestling scholarship and plans to become a sports agent.

You can see Third arguing with his professor here about the authenticity of his paper.

Digging to the core of the characters
His professor quickly judges him to be nothing more than a conservative jock and cannot admit that there’s a fresh and brilliant mind beneath the muscles. Outwardly, Third reacts with a cool, disarming manner. But Stangl knew that actor Tony Clarno needed to dig in much deeper to get to the character’s core.

“I kept encouraging Tony to go as far with it as he could — the moment only has impact if it’s truly rageful and coming from a place of pain,” she says. “Earlier in the script he lists all the things that happened to him as a result of the plagiarism. Originally, Tony played that sort of cool, not wanting the Emily character to know how upset he was. When he allowed that list to get him angry, the rest followed from there.”

Wingert takes on Laurie in a measured and nuanced performance. The character could easily be a one-note caricature of the self-obsessed baby boomer facing middle age. Wasserstein moves deeper than the easy targets (hot flashes, liberal guilt) and starts to question Laurie’s place in the world and the attitudes on which her life is based.

Obsessed with politics and the oncoming war (the play is set in 2002 in the lead-up to Iraq), Laurie also is struggling with troubles on the home front — from a complex relationship with her younger daughter to a best friend struggling with cancer to a father lost in his Alzheimer’s. 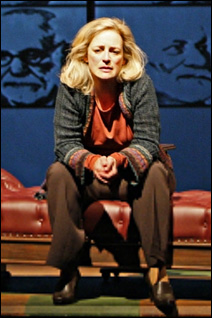 As Laurie’s father Jack, Raye Birk does remarkable work in a pair of relatively short scenes. His ability to dig into the character surprised even Stangl.

“Raye was so ‘in’ the role — right from the beginning — that I didn’t have to do a lot to pull it out of him. He surprised me in his audition, with the extent of his breakdown in the second scene. It was so deeply felt — I hadn’t imagined it that intensely and it was wonderful,” Stangl says.

Between Laurie’s membership in the sandwich generation and her other struggles, her life is crashing down before her. Unlike King Lear who eventually goes insane, Laurie realizes her flaws and moves to make amends — and even to open her mind beyond her biases. That awareness literally becomes the stage in the play’s final moments. The interior “box” that has encased the action is lifted to reveal the now wide-open world.

“The opening of the box is entirely our invention,” says Stangl, who crafted the final moment with scenic designer John Arnone. “I felt the play kind of stopped rather than ended and I wanted to create a moment that would lift the characters and us.”

First things first: Guthrie’s ‘Third’ is cause for pause