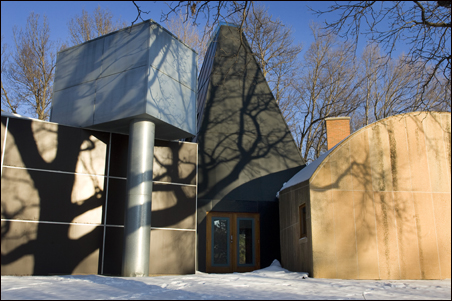 Photo courtesy of St. Thomas
An exterior view of the guest house, which will be moved to Owatonna.

Frank Gehry’s Winton Guest House in Orono is being donated to the University of St. Thomas.

St. Thomas officials have announced that the house, designed by the world’s most-famous living architect, will be moved to the Gainey Conference Center in Owatonna later this year. Real estate developer and current owner Kirt Woodhouse has been looking for a place where the famous house can be enjoyed by the public. The 2,300-square-foot house is appraised at $4.5 million, according to St. Thomas. 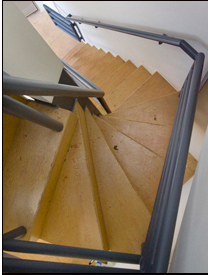 In 1987, before Gehry was internationally renowned, Penny and Mike Winton commissioned the California architect to design a guest house near their glass and brick home overlooking Lake Minnetonka. That main house was designed in 1952 by another famous architect, Phillip Johnson of IDS Center fame.

The guest house is a collection of Gehry’s odd shapes — a rectangular kitchen and sleeping loft, a wedge-shaped bedroom, another rectangular-shaped bedroom wing all fanning out from a pyramid-like living room. Each shape is sheathed in different materials — black sheet metal, Finnish plywood and galvanized sheet metal.

Its whimsical village-like feel and photogenic character earned it international acclaim and a cover on House & Garden magazine. It also set the stage for Gehry’s meteoric career, which has included designs for cultural icons such as the University of Minnesota’s Weisman Art Museum, the Guggenheim Museum in Bilbao, Spain, and the Walt Disney Concert Hall in Los Angeles.

After the Wintons moved, Woodhouse bought the 12-acre property and divided it into three lots, one holding the Johnson-designed house, one the guest house and one open for development. The Johnson house was bought and renovated but no buyers snapped up the guest house. Woodhouse explored donating the house to both the Walker Art Center and the Minnetonka Center for the Arts but neither institution found it feasible.

Woodhouse will pay for moving the house and reassembling it in Owatonna, where it will join another architectural landmark, the Norman-style Daniel Gainey house, designed by Minnesota architect Edwin Lundie. Stubbs Building and House Movers, a company that moved the historic Shubert Theater in downtown Minneapolis, will move the house, according to a St. Thomas press release. The house will be split into eight pieces and driven to the site individually. No figure for the move has been released.

St. Thomas plans to use the house for meetings and gatherings at the conference center. Marlene Levine, director of the conference center, said she expects the house to arrive this spring, be reassembled this summer and open this fall. “I’m thinking just the architecture will inspire people to think more creatively.”

The Wintons, who commissioned the piece to complement their modernist main house, are less enthusiastic about the move. “I just think in the separation of the two something gets lost,” said Penny Winton. “They spoke together.”

Minneapolis architect John Cook, who worked on the house with Gehry, said it was deisgned for a specific place with specific materials to contrast and match the Johnson house. “It was sited to be viewed from the Johnson house terrace as total sculpture. No windows were visible. I know it is a very difficult thing. On one hand you want to congratulate Woodhouse, and on the other hand, you have to question it.”

Woodhouse also plans to install displays related to Gehry’s work. But the sculptural house itself will be the foremost piece of art. Levine said it will be open to visitors and will have scheduled tours.

“Art of this caliber is meant to be shared and enjoyed by the public,” Woodhouse said.

Correction on Feb. 26: The original story incorrectly reported that the Gehry guest house was donated after failing to sell. The house has not been on the market during Kirt Woodhouse’s ownership. The story has been corrected.