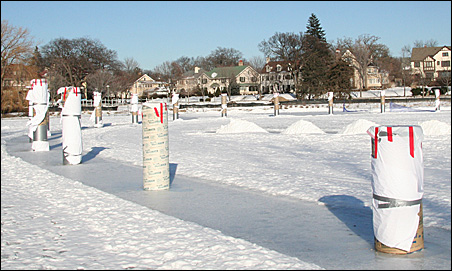 MinnPost photo by Linda Mack
Self-professed geeks Hal Galvin and David Bryan have been busy designing and assembling 31 ice columns in a semi-circle on Lake of the Isles in Minneapolis. Candles inside the columns will be lit Saturday night.

At 5 p.m. Saturday, volunteers will start lowering candles into 31 ice columns arrayed in a semi-circle on Lake of the Isles in Minneapolis and lighting 120 luminaries on a 9-foot pyramid. Ninety minutes later, these light sculptures and 600-plus ice candles lining the route will greet 900 cross-country skiers of the city of Lakes Luminary Loppet as they enter the lake from the Kenilworth Lagoon.

The pyramid and the “Ice-cropolis” are the brainchild of engineer Hal Galvin and architect David Bryan, whose Kenwood homes are near the lake. Inspired by a luminary-lit ski race on Lake Superior called Book Across the Bay, they have organized the pouring and placement of the 700 ice luminaries that have lined the nighttime loppet route. This year, the two felt more ambitious and cooked up a way to embed the 31 ice columns, ranging in height from 2½ feet to 8 feet, safely in the ice and keep them solid until they are lit.

“As far as we know, no one has ever done this before,” Galvin said.

With the help of computer-aided design, the two figured out how to arrange the columns so they would be aesthetically pleasing. (For fellow geeks, the arrangement is based on the mathematical formula of the Fibonacci code.) The 100-foot-wide semi-circle tucked nicely into the lake’s West Bay but they discovered they had to work around another winter sculpture — the Loch Ness snow monster that mysteriously appears every year on this part of the lake.

Other challenges included figuring out:

* What to use to encase the candles. Solution: heavy-duty tubes used for pouring concrete forms, donated by Brock-White.

* How to keep the sun from melting the south side of the candles through the dark-colored tubes. (Cover that side with white plastic.)

* How to get a hole in the middle of the ice for the candles. (Drill out the middle after the ice froze.)

* How to make sure the heavy columns didn’t tip over. (Embed them in 6-inch-deep grooves made with a special bit from a Canadian ice sculpture supplier).

* How to reinforce the tubes for the taller and heavier columns. (Duct tape, of course.)

* How to protect the tops from possible rain and too-much sunlight. (Cover them with plastic.)

“Yes, you have to be geeky to do this,” Galvin admitted.

Galvin and Bryan didn’t keep track of how much time they’ve spent plotting and testing out their ideas. But they are pleased that the number of skiers for the Luminary Loppet has soared from 200 to 900. (The more ambitious 33-K race is Sunday morning.)

“It didn’t really matter how much time it took,” Galvin said. “The whole lake will be lit up.”

IF YOU GO
Luminaries and the ice columns will be lit starting at 5 p.m. Saturday on Lake of the Isles. The Luminary Loppet begins at 7 p.m. The candles are expected to burn until 10 p.m.

‘Ice-cropolis’ to light the night on Lake of the Isles