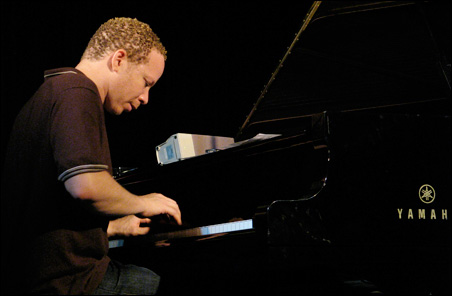 Saxophonist Chris Potter is the star of February’s “DownBeat” and the headliner at the Dakota next Thursday (Feb. 7), where his Underground quartet will play a one-night stand. Potter is always exciting and I look forward to seeing him again. But I’m just as eager to see his keyboardist, Craig Taborn.

Since leaving his hometown of Golden Valley, where he went to Breck and held basement jam sessions with his friends bassist Reid Anderson and drummer Dave King (both now of the Bad Plus), Taborn has covered a lot of ground geographically and stylistically.

He lives in New York, where he plays with the cream of the contemporary jazz scene, but tours frequently throughout Europe. He plays all kinds of keyboards — piano, Hammond B-3 organ, Fender Rhodes electric piano, synthesizers — and he composes. You can see Taborn below in a performance from last year’s Sur Seine festival in St. Paul.

So far he has made three albums as a leader. “Craig Taborn Trio” (1994) came out on the indie label DIW, “Light Made Lighter” (2001) and “Junk Magic” (2004) on Thirsty Ear. His many recordings as a sideman include work with Potter, violist Mat Maneri, bassists Drew Gress and Scott Colley, saxophonist Tim Berne and percussionist Susie Ibarra — iconoclasts all. In 2007, he recorded “Gang Font Featuring Interloper” with local heroes Greg Norton (Hüsker Dü), Erik Fratzke (Happy Apple) and King. Norton calls it “punkprogfreefunkmathmetal.”

Recording started in college
Taborn began recording when he was still a sophomore at the University of Michigan. He met the adventurous saxophonist James Carter at a restaurant gig. They hit it off and eventually made five albums together.

I recently listened to tracks from Carter’s first CD as a leader, “JC on the Set” (1993). Taborn’s piano is impeccable, intelligent and fairly straight-ahead. Scott Yanow of the All Music Guide called it “supportive.” Then I played some “Gang Font,” “Junk Magic,” “Prezens” (Taborn’s 2007 recording with guitarist David Torn), “Architect of the Silent Moment” (2007, with Colley) and Underground’s latest, “Follow the Red Line: Live at the Village Vanguard” (2008).

While Taborn’s travels can be measured in miles, his musical journeys are better expressed in light years. He does it all: jazz, pop, rock, funk, hip-hop, trance, techno, free, forms, gorgeous melodies, moody minimalism, noise.

It’s said that the music we hear as teenagers shapes our preferences for life. While other kids were glued to the Top 40 — in the 1980s, that meant Foreigner, Michael Jackson, Hall & Oates, Phil Collins, Journey and Wham! — Taborn checked out records from the library and listened to public radio. He discovered the artists of the AACM (Association for the Advancement of Creative Musicians) in Chicago, whose influence on contemporary music is incalculable, and Sun Ra, the cosmic philosopher of jazz. He went to the Walker Art Center and heard master improviser Tim Berne, who thinks Taborn is “insanely brilliant.”

Taborn’s parents, psychologist John and social worker Marjorie, knew to nurture without pushing. “It’s about being a good parent,” Marjorie told Jazz Police and JazzInk writer and photographer Andrea Canter, who has known the Taborn family for years. “Don’t make your goals theirs. It’s their passion.” They provided the resources he needed: lessons, transportation, a piano, a Moog synthesizer for Christmas when Taborn was 12. He grew up playing acoustic and electronic keyboards. Sometimes in performance he’ll play both at the same time, one hand on each.

I know why I’ll go to see Taborn: because I like his music. Canter offers more reasons why music fans should catch him whenever he’s in town. “There’s a lot of talent in the Twin Cities, and Craig is a good example of someone who came out of this environment. It’s a chance to see one of our hometown musicians who’s made quite a reputation for himself. Plus he’s a fabulous musician who does all sorts of interesting things with sound.”

Taborn will return March 28 to perform at the Walker with Berne and Gress. Those will be wild shows. Underground is modern jazz but still accessible. Wet your feet at the Dakota, then get tickets for the Walker show and jump into the deep end of jazz.

Happy Apple with the James Buckley Trio: You can fly to New York City, dress in black and go to the Stone to hear free jazz, or you can stay home, don your North Face jacket and head to the Cedar for Happy Apple. Erik Fratzke, Dave King and Michael Lewis will make you forget you’re getting Cedar butt from the metal folding chairs. James Buckley, J.T. Bates and Bryan Nichols open. The Cedar, 8 p.m. Friday, Feb. 1 ($15).

Ari Hoenig & Jean-Michel Pilc Project: Drummer Hoenig and pianist Pilc came to the Artists’ Quarter in March of last year and blew people away. I missed them then but won’t repeat that mistake. The Artists’ Quarter, 8 p.m. Friday and Saturday, Feb. 1–2, ($20).

The Gospel According to Ramsey Lewis: The 2007–08 Northrop Jazz Season continues with Ramsey Lewis, three-time Grammy winner and National Endowment for the Arts Jazz Master. His most recent honor was the 2006 Stellar Award for Best Gospel Instrumental Album, and it’s gospel he’ll bring to our frozen little souls. Ted Mann Concert Hall 8 p.m. Saturday, Feb. 2 ($35 and $45). Call 612-624-2345 or check one of the ticket offices listed here.