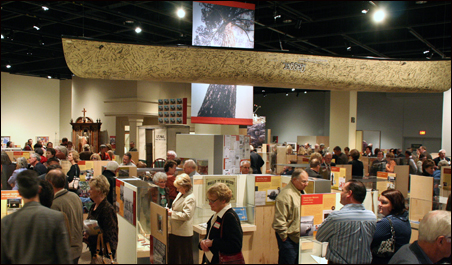 When Kate Roberts showed a friend her new book, “MN 150: The People, Places, and Things that Shape Our State,” he said, “Don’t take this the wrong way, but this would be a really good book to leave in a bathroom.”

Is that the right way to treat a book about the history of our great state? Why not? Roberts’ approach to momentous times is serious, but not without fun. Each topic is succinctly covered in lively one-page essays. And considering the current state of print newspapers, a new source of local, high-quality bathroom reading is quite welcome.

Roberts, a senior exhibits developer for the Minnesota Historical Society, created the book as a companion to the state sesquicentennial exhibit, MN150, which spotlights 150 highlights from the state’s past.

This broad overview of the personalities (Charles A. Lindbergh Jr., Prince, Paul Bunyan), events (the destruction of the Metropolitan Building, the Cloquet/Moose Lake Fires), and the things (Spam, Tonka trucks) that changed or defined the state celebrates Minnesota at its most glorious and most disgusting. And it helps explain what makes this place so distinctive that home-grown heroes like Prince, Bob Dylan and Jesse Ventura — OK, maybe not so much “The Body” — still live here, fame, fortune and all. 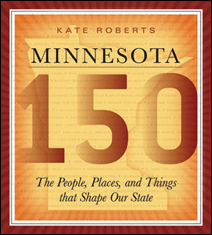 So many nominees, so little space
The challenge in writing a book to honor the state’s 150th b-day this year, says Roberts, was choosing only 150 topics. More than 2,700 contenders were nominated by the public at History Center events and the State Fair, and then a group of experts evaluated the field. Some nominees were easy to dismiss (actor Josh Hartnett), while others had to be cut because they were hard to illustrate visually (“Minnesota Nice”).

There just wasn’t room to fit everything in, and omissions such as Duluth’s Aerial Lift Bridge, and, especially, Charles Schultz and “Peanuts,” haunt Roberts. “I find myself thinking back on it, and wondering why we didn’t fit him in,” she says. “We did get a few nominations for him, but maybe they didn’t make the case for historical/social change, or something like that. But I look at a figure like him, especially now with the recent biography, and think, yeah, he would have been a very good inclusion.”

At least one inclusion reminds us that history is a living process. The Minneapolis hip-hop band Atmosphere won a spot, while other bands that helped make Minneapolis a music town did not. “We did get people writing in pretty vociferously for The Replacements, but Atmosphere’s nominator made a very good case that within their genre, they truly are ground-breaking. I became convinced that Atmosphere really had done something uniquely Minnesotan, because of their lyrics, and because they’d chosen to stay in Minnesota, and when I looked at the Replacements, I didn’t see the lastingness that we’re looking for. But talk to me in five years and I may say, what were we thinking? They may have disappeared and we’ll be wrong.”

The book and the exhibit are not the final word on Minnesota’s first 150 years. The MN 150 exhibit includes a “talk back” station, in which visitors can go into a booth and tape a 20-second video describing what else should be in the exhibit. The full list of nominations is archived on an online wiki.

Most readers will recognize a mix of the familiar, the forgotten and the unknown among the topics that made the cut. Roberts’ mother-in-law read the book and responded with a three-page letter detailing all the places her own life intersected with things in the book. “She wrote, ‘I bought my first dressy dress at Young Quinlan, and I still remember what size it was; I worked at Honeywell in the 1960s,’ and we hear things like that as people go through the exhibit,” says Roberts. “They really connect with it and start sharing their own stories.”

History, after all, is nothing if not personal. So read about it wherever you please.