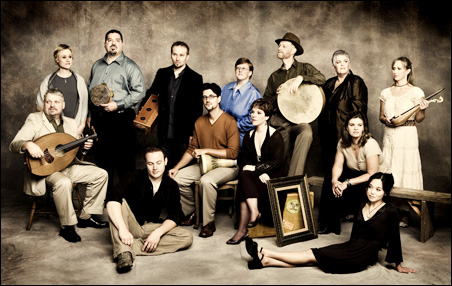 There’s a pale glow around the heads of the members of The Rose Ensemble as they sing. The halos move only slightly as the singers, all dressed in black, sing of the Virgin Mary in high, cascading harmonies.

The halos are simply the result of flawed technology, however. The image on YouTube is overexposed; it’s the sort of minor flaw easily forgiven in a wired world crowded with high-tech miracles.

While the particular piece sung on YouTube, “Bogoroditse Devo raduysia,” is a modern one from the 2003 Rose Ensemble CD, “Fire of the Soul,” much of this St. Paul ensemble’s music goes back hundreds of years.

The Rose Ensemble’s candlelight concerts on Friday and Saturday, Feb. 22 and 23, “The Secret Society of Notre Dame de Paris,” feature music composed by 12th century Catholic monks. (You can listen to some of the music from the piece here.)

Poetry and scandal
Jordan Sramek, artistic director and founder of the ensemble, says the monks were composing and performing music with sharp, even scandalous, poetic criticisms of the pope woven into its haunting vocal undulations.

“The monks turned their attention to the Roman church, specifically the curia — the court of cardinals surrounding the papal throne,” he says. “Rome was preaching about piety and selflessness while at the same time it was using church money and tax money and donations from the faithful to pay for lavish garments, for example, and to fund lavish buildings. They were also selling indulgences. And French clerics found this to be abominable.”

So they struck with the weapons available to them: words.

“They used their command of Latin to write beautifully lyrical but also incredibly satirical poetry to attack the curia,” Sramek says. 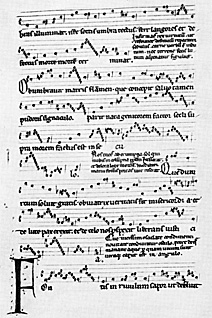 Courtesy of the Rose Ensemble
Here’s a sheet from the original manuscript from the 12th century.

The satire was delivered with melismatic intonations: the hypnotic vocal technique of altering the pitch of single lyrical syllables as they’re being sung. (Gregorian chants are melismatic.)

Audiences don’t need to be steeped in musical terminology, medieval lore or Latin, however. Part of the enjoyment of a Rose Ensemble performance is in letting go of the clutter of your mind; allowing yourself to be carried back in time by the intricately laced, powerfully rhythmic vocals.

She says the group’s material is heavily researched by Sramek, who often travels to the country of origin to talk to musicologists, church historians, librarians and other keepers of the Early Music flame.

Even though the music, language, country and the period it comes from are all meticulously researched by Sramek, there’s no way for anyone to be entirely sure that the Rose Ensemble, or any other Early Music group, sounds entirely authentic.

“Will we ever be 100 percent historically correct?” Sramek asks. “We don’t know, but we can be, at least, historically informed.” 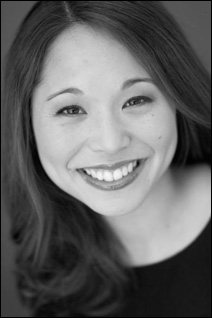 Sueoka says Sramek pushes the group to understand the history of the pieces, but at the same time encourages them to use their interpretive skills. “What he says is you do the research you can, so you understand it stylistically and academically, and then after that it’s kind of a free for all, and you try to make the most informed decisions you can.”

She says she appreciates the artistic freedom sometimes stifled in an Early Music community keenly focused on methods used in notable past performances of the genre.

“People in the community can get sort of uppity: ‘Well, you know it should be done this way because people have [sung this 12th-century music] this way since 1940,” she says with a laugh.

“In all honesty, the program we’re doing this weekend is about as esoteric as The Rose Ensemble gets. It doesn’t have a huge amount of variety. Usually, you’re going to hear at least 200 years of music, if not 400, 500 or 600 years of music,” he says.

“A European audience could deal with this program well, but American audiences … get bored pretty easily. So we are doing everything we can to add variety. I’ve got solos and I’ve got trios, and I’ve got men chanting and women chanting, I’ve got the harp and I’m playing the hurdy-gurdy and other things.”

The settings of the concerts this weekend — St. Mary’s Basilica in Minneapolis and the St. Paul Seminary Chapel — will undoubtedly heighten the listening experience, as will the glow of the candles lighting the performances.

“Some people say, ‘C’mon, Jordan, could you be any more Hollywood?’ But … people really need this. They want an opportunity to just focus on the music, just have everything stop, just have time to be calm,” Sramek says. “No radio, no lights, no cell phones — just candlelight and music in a beautiful space.”

Reservations for The Rose Ensemble’s “The Secret Society of Notre Dame de Paris” concerts can be made by calling 651-225-4340 or going here.

Listen to more of The Rose Ensemble’s work here.