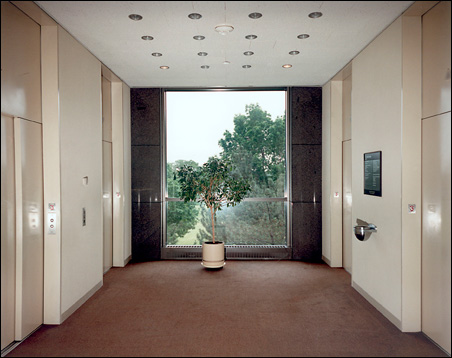 If you had to pick one image that symbolizes photographer Paul Shambroom‘s work during the last 20 years, you’d be left hard-pressed and empty-handed.

Sure, one glance at the photos in “Picturing Power,” his retrospective show opening this weekend at the Weisman Art Museum in Minneapolis, brings into focus common themes of authority, control, democracy and the lack thereof. Yet the subjects are varied and complex, and his images range from documentary stills to meticulously controlled portraits.

In fact, Shambroom’s collections (“Factories,” “Offices,” “Nuclear Weapons,” “Meetings” and “Security”) work like pages of a two-decade-long tale of opposing forces. In one instance, his large-scale images explore empty and inoffensive (or is it offensive?) beige workspaces decorated with a lonely tree that longs to live among the living. In another, a photo of a rescue worker in a Hazmat suit is turned into something almost bucolic, an image winking at the medieval masters of portraiture.

As a retrospective, the images are a balancing act between the authority and powerlessness Shambroom examines. They are both a reaction to and influence on one another, like the interdependent yin and yang. Even the most enlightened Buddhist monk can’t deny it: Work is banal. War is threatening. Power corrupts and absolute power corrupts absolutely.

The bogeyman cometh
Exploring the spectrum of power wasn’t always Shambroom’s intention as an artist. “It sort of evolved over my career,” says Shambroom, a graduate of Minneapolis College of Art and Design. “It’s part of the process of learning about myself. That’s what makes it interesting. And I guess I’ve always felt fairly engaged with the role of citizens in government and the role of power structures.”

Power doesn’t begin or stop at the end of his camera lens. In his “Nuclear” series, for example, photographed in 1995, Shambroom used his own power of persuasion and persistence to get onto military bases that birth nuclear weapons. Though the mammoth torpedoes are overwhelming — and rendered like inadvertent sculptures — Shambroom wasn’t interested in the formal concerns or the look of the weapons.

Instead, photographing the nuclear weapons allowed him to envision a concrete reality behind what became an obsession. Shambroom was born in the mid-1950s during the duck-and-cover crisis, which since has been usurped by “orange alert.” For him, nuclear annihilation was as big of an imprint as the food pyramid. “It was the bogeyman,” he says.  “Photographing it was an opportunity to go see the bogeyman.”


The office lives
Shambroom began his career in the late 1970s as a commercial artist, photographing CEOs and offices around Minnesota. It was there he decided to document the empty cubicles and the common oddities that adorn them — wood hangers, an abandoned birthday balloon — and what they reveal about their part-time occupants.

“I never set out to express my opinions about corporations, because for one thing I don’t have a clearly defined image of corporations,” says Shambroom, who was born in New Jersey. “But I’ve chosen not to work for a corporation as an employee my entire life, so that says something.” 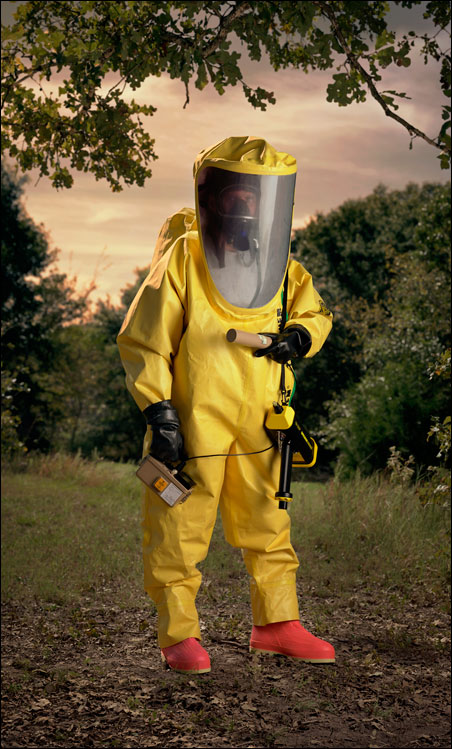 To be sure, the “Offices” series is influenced greatly by Lee Friedlander, who is famous for his photos of American workers and workplaces in the 1980s. Friedlander chronicled in black-and-white the work life at Cray Computer Corp. in Chippewa Falls, Wis., the home of the supercomputer. The images remain fantastic as time- and art pieces, even in their most mundane moments.

Not all of the pieces in Shambroom’s “Offices” work today as singular images, but they’re not supposed to: Putting the images in context with one another makes each one more believable, and thereby more powerful. The lonely plant, for example, has more of an impact if the camera can reveal that lifeless cubes are inexplicably multiplying.

Patriot acts
Like Minnesota photographers Alec Soth and Angela Strassheim, Shambroom first gained national recognition at the Whitney Biennial, in 1997 with his “Nuclear” series. But it is his most recent series, “Security,” that catapulted Shambroom into the spotlight.

These photos are drastically different from Shambroom’s previous series. For one thing, they’re digitally manipulated. For another, they’re further manipulated by Shambroom. And while his documentary subjects forced Shambroom to grapple with uncontrollable environments, the staged subjects and environments in “Security” are like exclamation points on reality. 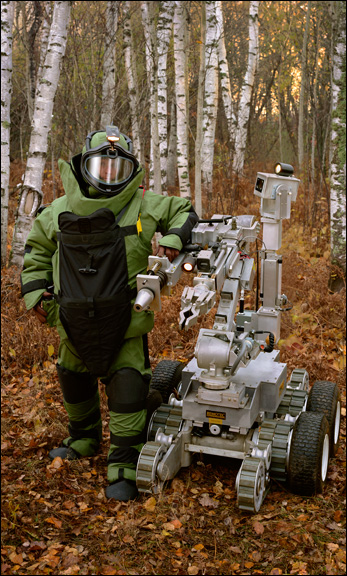 Here, everything is composed, detailed and controlled. This time, Shambroom has power and control over the context, the subject, the light, the background, the spot, the faces of his subjects.

Shambroom photographed emergency-response team workers — from a SWAT officer to a bomb technician — outfitted in their gear and posing in dramatic and even beautiful landscapes. Birch trees in Duluth are backdrops for a bomb tech and his robot; a pink-tinged Texas sunset is the setting for a Hazmat worker and his chemical-weapon-sniffing gear. The images are eerie in their constructed beauty and ominous in their subject matter.

Yet it’s the disparities that make all of Shambroom’s images so compelling. Do they speak to beauty or to destruction? To power or the lack of it?

“I think it depends on the viewer,” Shambroom says. “I think people react to them based on how they view themselves in the power structure. It’s all relative, really.”