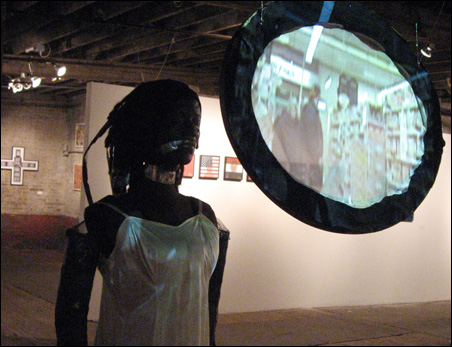 MinnPost photo by Molly Priesmeyer
A video/sculpture by Chrys Carrol is part of the show at the Soap Factory.

The ice sculpture at the entrance of the Soap Factory makes for a fitting introduction to the current exhibit.

The 10,000-plus-square-foot space in the former National Purity Soap Co. building is not heated in the winter months for budget reasons. Sure, your hands might start to ache after the first few steps on the Soap’s old wood planks, but a few shivers shouldn’t keep you from checking out the current exhibit, “Soul on Ice: Understanding the Value and Depth of Black Culture.”

Borrow your mom’s Isotoners, if you must.

Curated by Pat Phillips and the Obsidian Arts-sponsored The Artists Within Us (TAWU), the exhibit features work by more than 60 U.S. artists working in a variety of media: murals, sculptures, paintings, videos, spoken-word pieces, collages, masks and more. The show is named after “Soul on Ice,” the book by former Black Panther Eldridge Clever.

To be sure, the exhibit can become a bit overwhelming. There’s so much to explore and comprehend, but little in the way of explanation. If the curators’ point was to showcase the depth and breadth of current African-American artists, they definitely succeeded.

From pop culture to political and personal
Work here ranges from pop-culture examination and adoration (paintings of Kanye West and Michael Jackson) to emotionally raw political and personal pieces. For one, Tobechi Tobechukwu’s black-and-white images explore mothers who lost their sons to urban violence. 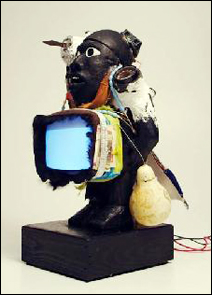 Yet, almost all of the images stand alone — without artists’ statements, simple bio information, and in some cases, titles. While that might make sense for a handful of other exhibits, it seems a little erudition would be helpful in this show, where there is such variation in voice and media.

Even so, some fabulous works are worth checking out, including local artist Ernest Arthur Bryant’s “biggieman” figure, a traditional Congolese statue with a video player in its belly where viewers see themselves staring back at them in black-and-white. For Bryant, old worlds and new worlds become intersections of media and extremes. Such unordinary arrangements are exclamation points for Bryant, an artist who is known for weaving traditional and street art.

Also of note is the fantastic video/sculpture piece by Minneapolis photographer/artist Chrys Carrol. In her piece, an African-American female has emerged from a dress form, woven together with a mask, netting and paint. Her eyes are closed, but she stares back at a mirror/video that flashes incongruent images. In this way, she and her reality are like mirror images. They are stitched together.

Of course, not all of the standout artists are Twin Citians. The aforementioned work by Tobechukwu is haunting and beautifully photographed, and the wood paintings by Maria Caples are not to be missed. Her anachronistic images, painted in the style of realistic folk art, serve as compelling reminders to what was once cherished and misappropriated.

It’s easy to miss the smaller rooms that make up this giant gallery. But be sure to check out “Draptomania” by Peyton in the last room. One of the few pieces with a statement, “Draptomania” explores the so-called “mental disease” that gave slaves the urge to run from their masters. Hanging dolls, constructed from socks, are hung and frozen in ice, perpetually bound by power, time and the inequalities that remain.

“Tectonic Industries: The Desire to Stay Versus the Inevitability of Change.” Franklin Artworks, 1021 E. Franklin Ave., Minneapolis. Through March 29. Free.

The uneasiness is palpable in a room where 16 people seem to talk to one another via flickering TV screens. The televised subjects are part of Franklin Artworks’ current video installation, “Tectonic Industries: The Desire to Stay Versus the Inevitability of Change.”

It isn’t so much the subject matter causing the tension (they read lines from Alfred Hitchcock’s “The Birds) — it’s the settings in which the subjects are being watched. They’re sitting on couches or beds, staring in numbed-out poses in front of the TV, movie or computer screen.

When we numb out in our own worlds, no one is anchored in front watching us. But what if they were? 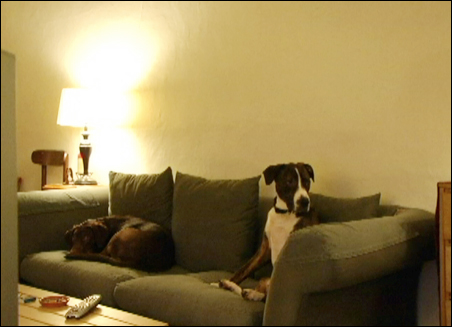 Photo courtesy of tectonic industries
Subjects come and go in the video installation at Franklin Artworks.

Twin Cities-based artists Lars Jerlach and Helen Stringfellow describe their video installation as exploring the artifice inherent within the creation of modern myths. In other words, it’s intended to be emotionless, unaffected retelling of a popular story in an oddly domestic setting.

The most compelling piece of the project isn’t in its re-creating or dissecting of popular culture. Rather it’s the medium and its ability to piece together and remake a story, stilted and spectacle-free, that makes the work stand out. The televised subjects could be reading a Scope commercial and the work would still be technically intriguing and creepily prescient.

Karolina Karlic’s “Close to Home — Images from the Ukraine” (also at Franklin Artworks through March 29)
Karolina Karlic’s images uncover vivid Technicolor dreams: a close-up of a teacup with delicate wafers, a woman in an electric floral dress, an ornate room worthy of an equally ostentatious emperor. In each photograph, harsh, restrictive patterns (crisscrossed ceiling boards, rocked sidewalks) are juxtaposed with soft beauty: A woman in pink sandals holds a fluffy, cloud-colored cat in one image. In another, an imposing ice-blue chandelier is surrounded by dancing, modern drapes. As snapshots of what a glancing eye misses, the images reveal the beauty and patterns found in randomness. 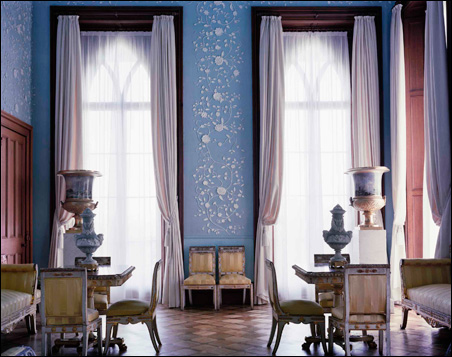