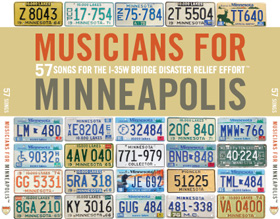 When the I-35W bridge collapsed on Aug. 1 of last year, 13 lives were ended and countless others altered forever. Today, as a new bridge is being built, survivors and families of victims are rebuilding their lives as well.

A new effort to assist in the healing and rebuilding process is a three-CD compilation, “Musicians for Minneapolis: 57 Songs for the I-35W Bridge Disaster Relief Fund.”

All of the proceeds from the project will go to Minnesota Helps: Bridge Disaster Fund, which has raised $1.1 million from other sources so far.

Lynne, whose 2006 “Lipstick” was a Top 30 country hit, is the only artist to have written a new, original song for the project. The Coon Rapids resident was touring in Florida when he heard the news of the bridge collapse.

“I was coming down for breakfast in a Holiday Inn and the television was on and that was all they were talking about. I felt like someone kicked me in the stomach,” Lynne recalls.

His “The Chance to Say Goodbye” is the first song on the first disc. (You can hear it on his MySpace page.)

After producer James Edlund of Electro-Voice (a Burnsville maker of pro audio gear) contacted Lynne about contributing a track to the compilation, he began to sift through his unreleased songs, trying to choose the best one for the project.

A song for the families
“I write a lot of songs and I was trying to decide which one was right, and then I thought, wouldn’t it be nice to write one specifically for those families [impacted by the disaster].”

Edlund says the idea for “Musicians for Minneapolis” began to take shape as he fielded phone calls from around the country from musicians who work with Electro-Voice equipment. 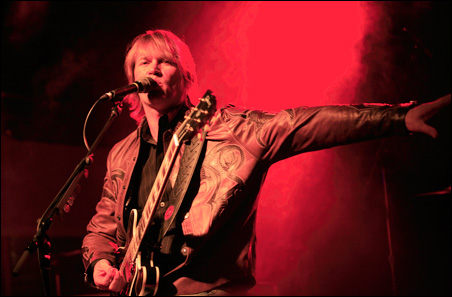 Photo by John Engler
Rockie Lynne of Coon Rapids wrote “The Chance to Say Goodbye” for the CD.

“They were checking in … to see that everyone [here at the company] was OK. After speaking with some of these artists, they wanted to know, ‘OK, everyone’s safe, now how can we help?’ Numerous conversations yielded the idea of a benefit album,” he recalls.

The CD set includes a number of previously unreleased tracks, including the Cajun lilt of “Chanson d’Acadie” by Beausoleil avec Michael Doucet, the power pop of Wade Chandler (“King of Heartache”), the dreamy alt-country pop of the Continental Drifters’ “Snow” and the quiet chime of “Send in the Clowns” by Mark Kozelek of Red House Painters, among about a dozen others.

“I’ve been over that bridge a bunch of times,” Kozelek writes in the liner notes. “It’s hard to believe it’s gone. I recorded this one a while ago … I never did anything with it. It seems appropriate for this cause.”

Says Lynne, “I just hope this album is part of something that helps these families heal.”

Edlund says a CD release party is in the works, but a date and list of participating artists have yet to be finalized.

He says “Musicians for Minneapolis” retails for $19.99 and is available at Electric Fetus, Cheapo, Best Buy and other locations. (You can find the entire list of retailers here.) It’s also available at cdbaby.com.