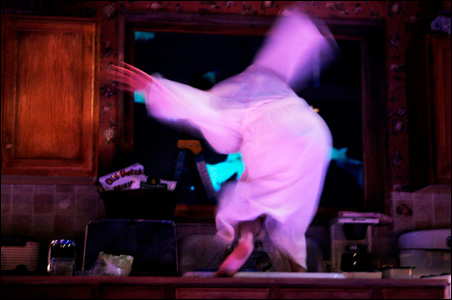 Photo by Michal Daniel
Nathan Keepers swoops in for his role in last year’s “The Swan” at Jungle Theater.

The first time Nathan Keepers wowed me was last fall in Bain Boehlke’s production of “The Swan” at the Jungle Theater. As the mysterious creature that crashes through Dora Hand’s front window and, under her crazy-love tutelage, is transformed into an avian-human hybrid named Bill, Keepers was a beautiful incarnation of the terrifying bird.

As Keepers moved about the stage, he’d extend his arms in an enormous wingspan. But he also curled up inside a small laundry basket. He was by turns fearsome and sympathetic. When I met Keepers after the show in the theater lobby, I was stunned that he seemed so diminutive in light of his stage presence, even though he’s a head taller than I am. Ah, the magic of theater.

Then I saw him in Theatre de la Jeune Lune’s “The Deception,” in which Keeper’s Arlequino was a bumbling, hyper-kinetic naïf. What a contrast. So as Jeune Lune prepares its next production, the four-person “Fishtank,” I sat down with Keepers to learn just how movement plays a role in the creation of his diverse roles.

‘The body doesn’t lie’
Much of it has to do with his training in the Jacques Lecoq movement method, which Keepers learned from veteran Jeune Luners Dominique Serrand, Vincent Gracieux, Barbra Berlovitz and Robert Rosen (all graduates of Ecole Jacques Lecoq in Paris). Since Keepers, now 27, started training with Jeune Lune during his senior year in high school, “what appealed to me was the non-psychological side of Lecoq,” he explained. “It comes from the perspective of play.”

“He built a pedagogy based on the root forms of theater — street plays, the tragic chorus — and from an athletic movement perspective, and started applying that to how people function and relate to each other in space,” he continued. “That’s how Jeune Lune has gone at it for years. We just keep working the body, rehearsing, playing, trying things. We always say the body doesn’t lie. Emotions always come from the body first.”

So in “The Swan,” he explained, “I had to be a swan. Not a guy pretending to be a bird, not a crazy guy who thinks he’s a bird, but the bird itself.” Boehlke’s set helped, he continued, because space and spatial framing are integral to creating such characters. “Bain’s brilliance was that he put the characters in a realistic place, a real room. That’s why I looked liked gigantic, like a ‘Wow, he’s a big damn bird.’ ” 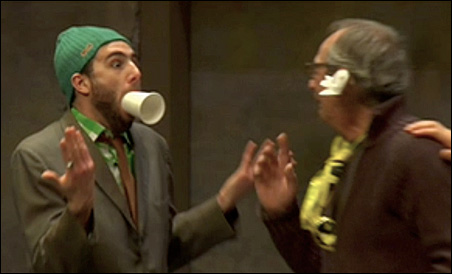 So how will Keepers’ body manifest in space in “Fishtank?”

“Oh, it’s a totally different ballgame,” he said. The piece, which stars Keepers, Serrand, Steven Epp and Jennifer Baldwin Peden, “is about the epic within the mundane. Like, say you lose your wallet. Where does that take you? You wonder who’s spending your money. You need to cancel your credit cards. Someone could be stealing your identity. It just escalates. But then you find your wallet and all is back to normal. That’s the world of the play.”

See a clip of Keepers and crew in the “Fishtank,” shot by Adam Olson. Keepers is the one with the mustache or beard.

“Physically, it’s about the anti-hero, the person caught in their own preoccupations and distractions and folly,” Keepers continued. “So if two people are doing something, the person watching becomes very important.”

In other words, stillness — the far end of the movement spectrum — is performed with as much attention and intention, as the running, or head-wagging or gestures occurring elsewhere on stage.

“At Jeune Lune, we’re always aware of too much movement, or not enough,” Keepers said. “People sometimes say we do physical theater. I hate that phrase, because everything’s physical. People are always moving. We just do theater that’s immediate and based on humanity. But wherever the movement comes from — whether you run across the stage and slam into the wall, or are just standing there — it’s got to come from place that’s completely true and honest. Then audiences don’t question it.”

The swan swims with the fish: Actor Nathan Keepers talks about the art of movement in one role to the next