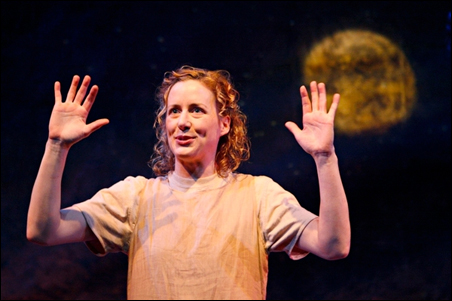 Editor’s note: You be the critic, too. If you’ve seen “The Syringa Tree” at the Jungle Theater, would you recommend the production to a friend? Why or why not? Please comment below.

I’m a skeptic when it comes to one-actor shows. Maybe it’s too many bad experiences with self-indulgent explorations of a life not all that interesting, or it’s that a good story would have benefited greatly from more actors to flesh out the concept.

Many moons ago in a theater community far, far away (Florida, I believe), I saw a show about the life of missionary Albert Schweitzer. It should have been compelling but it left me bored and exhausted, eventually struggling to stifle a giggle when the actor started to dramatically intone about the plight of the “pygmy children.”

My biases have been tempered in the last few years after seeing a number of terrific single-actor performances. And they were shattered earlier this month with Sarah Agnew’s remarkable performance in “The Syringa Tree” at the Jungle Theater.

Agnew commands attention from the very first moments of the show, when she appears on a giant swing and describes the world through the eyes of a young South African girl who knows her world is troubled and unfair, even if terms like “apartheid” may be alien.

Seamless transitions
In an instant, Agnew shifts to another character, and then another. In all, there are nearly two-dozen roles in Pamela Gien’s autobiographical play, which she adapted into a novel in 2006.

Yet the shifting never jars the audience. We are with Agnew as she reaches into the memories of these characters, painting the picture of a society that feels completely alien, even if the events are only a few decades distant.

Agnew, who had never done a one-person show before, admitted to pre-run jitters.

“It was pretty terrifying at first, but you just hunker down and keep reminding yourself that you can get it,” she said. “I ran a marathon for the first time five years ago. It’s a similar thing. When you are inside of it, you never think you will finish. Then you get it done and it is exhilarating.”

Having an audience certainly helped.

“It’s much easier than doing it to an empty hall,” Agnew said. “We’ve had nearly full houses and the audiences really seem to go with the story. As we’ve gone along, they are less afraid to laugh. At the beginning, they were less ready to laugh at some of the silliness of the little girl; now they are ready to jump in right away.”

“Syringa”director Joel Sass notes that unique challenges are faced in directing such a show. “It’s a highly personal process of the individual actor and that has to be discerned by the director in order to understand how to structure long rehearsal days and see when to push the actor or when they need to be left alone,” Sass said.

Bringing 24 characters to life
During the five weeks of rehearsal, Agnew worked to bring the show’s two-dozen characters to life. This included quite a bit of research, from devouring documentaries on apartheid to scouring YouTube for clips of traditional dances to aid the physical side of the characters.

Sass has a close-up perspective of one-actor shows. After finishing “The Syringa Tree,” he went right into rehearsals for “9 Parts of Desire” at the Guthrie Theater, working with Kate Eifrig.

Just like any play, one-person shows need a number of factors to come together to make them good: a quality script, a good concept for the production and talented performers.

“To hold the attention of an audience for an hour and a half, all by yourself, is a huge challenge and can be quite terrifying,” he said. “The response of many performers would be to scream; Sarah simply laughs out loud and keeps working.”

Actors talk a lot about energy — the energy they share with their co-actors and, later, with the audience. It might sound like new-age mumbo-jumbo, but there is a real exchange occurring, and the better the energy, the better the show. For Agnew and “The Syringa Tree,” that exchange loses one piece, but gains from the hard work of the audience.

“The wonderful effect of this is that the audience becomes highly invested in the show — they are essentially holding hands with the actor for the entire performance,” Sass said.

Agnew, who will next be seen at the Guthrie as the titular character in “The Secret Fall of Constance Wilde.” sees it much the same way. “It’s sort of like piloting an aircraft. You throttle up or down depending on what they are giving you. They are as much a presence as your acting partner would be.”