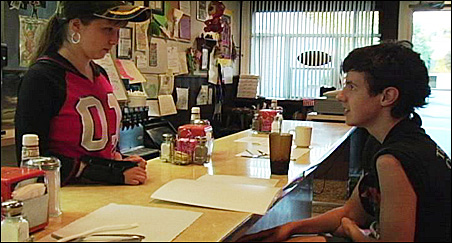 Elephant Eye Films
Billy and his friend at the diner in “Billy the Kid.”

By now most of us have met Diablo Cody’s precocious, preggers, slang-slinging Juno MacGuff. But is the world ready for Juno’s pubescent male counterpart?

When we first see the rat-tail-sporting title character of Jennifer Venditti’s award-winning documentary “Billy the Kid,” he has his mouth wide open and practically pressed against the camera lens. “Did you see down my throat at all?” he asks with a characteristic mix of innocence and irreverence. “Did you see the uvula, which is that dangly thing at the back of the mouth?”

Venditti didn’t put this microscopic scene at the start of her film for nothing. It’s meant as an early indication that 15-year-old Billy wants us to see everything, as does his director.

“He says exactly what he feels,” asserts Venditti, who will be at the Parkway Theater in Minneapolis to introduce screenings of “Billy the Kid” on Sunday and Monday and answer questions from the audience. (The film, by turns funny and haunting, opens today for a one-week run.)

Venditti, who discovered her karate- and heavy metal-loving subject at a high school in rural Maine while casting another movie, thinks Billy is more real than Juno. “He speaks to that same kind of awkwardness and intelligence, that ability to see the world differently,” she says. “But he’s not predictable in any way. He takes you through every single emotion in this movie. It’s very intimate to be in his shoes. And that makes some people uncomfortable.” 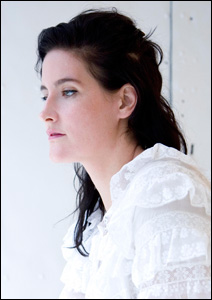 Surprising sweetness
“If there’s one thing you cannot stop,” declares sophomore Billy, who dines alone in the school lunchroom and lives with his supportive mom on the outskirts of town, “it’s a guy who’s in love.”

Indeed, the great surprise of “Billy” is its resilient tone of sweetness, in keeping with the kid’s gentle courtship with Heather, a 16-year-old vision-impaired waitress. Their relationship, which at one point draws cheers from grown men outside the diner where she works, vaguely recalls that between Rocky Balboa and Adrian. Which maybe isn’t surprising, since Billy — who runs through town in a familiar looking gray hoodie and at one point starts humming the Italian Stallion’s theme — has a DVD copy of “Rocky” on his shelf at home.

The kid’s other cultural interests include his beloved “Truckstops of America” T-shirt, the band Kiss (whose power ballad “Forever” is a particular fave), and, alas, serial killers, which raises the proverbial “red flag” among the school’s adults.

Venditti says her movie is chiefly about tolerance of eccentric individuality in school and beyond, and her shots trailing lonely Billy through the maze of high school hallways carry a poignant charge.

“My number one intention with the film was to give a voice to someone who wasn’t being heard,” Venditti says. “What’s happening with young male rage in this culture is that kids are dealing with all these issues and they’re being stripped of their voices. The rage builds up and their actions define their future. And then we as adults start talking about them and trying to analyze them when it’s too late. We have to start listening earlier.”

V is for Venditti, who gives voice to ‘Billy the Kid’