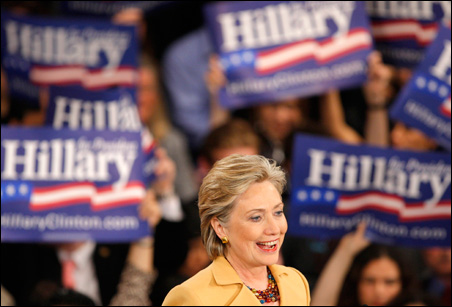 Hillary Rodham Clinton walked away from Super Tuesday with fewer votes than Barack Obama but with more Democratic delegates pledged to her than to Obama.

In a house of cards that could fall either way, what does this lone woman candidate need now to win her party’s nomination?

A bolder message? More male supporters? Or more of what she’s been doing all along?

All of the above, according to three prominent women on state and national fronts with a stake in how things go for Clinton.

While Obama revs up crowds with his mantra of change in America, a more passion-filled message could create for Clinton that same kind of excitement, suggests state Sen. Sandy Pappas, DFL-St. Paul, who says she was the first among Minnesota elected officials to endorse Clinton. “She knows what her plan is. She needs to show more why she cares about things,” she said. “To show her passion, her values more — for the big things we’re trying to achieve for our country.”

A debate that won’t die
Intriguing advice comes from Roxanne Rivera, a former spokeswoman for the New Mexico Republican Party who says she is concerned about the ongoing debate over whether Clinton should “play up her femininity or try to just fit in as one of the guys.”

The CEO of Albuquerque-based Syntactics Communications Skills, LLC, which trains and coaches executives, said she just didn’t want the reasons for Clinton’s success to get lost in the fray. “She is a strong, determined, intelligent woman,” and should embrace her femininity, said Rivera.

• Act like a lady, which she defines as making people feel at ease in her presence but standing up for her rights.

• Rather than trying to think like a man, use her experiences as a woman to approach issues from  different perspectives – a skill men haven’t mastered so well,  she said.

• Reach out to women, use them as a sounding board and recognize women will find her appealing if they feel she’d make “a good friend.”

On the heels of Super Tuesday’s results, Rivera adds this: Become more likable — to men in particular. “Tone down the harshness. Smile more. And for goodness’ sake, don’t cry in public.”

While Sen. Clinton’s teary-eyed response to a voter in New Hampshire appeared to win her favor in many circles, Rivera still advises against crying in public. This is sound advice for any woman wanting to succeed in a male-dominated world, said Rivera, who got her start in business as co-founder of a construction services company and has a website called nocryinginconstruction.com.

‘Remaking America’
Back in Minnesota, Senate Assistant Majority Leader Tarryl Clark, a Democrat from St. Cloud who is on Clinton’s Minnesota Steering Committee, said the former first lady has been picked on enough. As the lone woman candidate, Clinton has been the target of questions and media reports “far more detailed and personal” than those directed at male candidates, Clark said.

“She has walked through fire,” she said. “And she has showed candor and humor. We’ve seen someone who was strong and showed empathy at the same time.”

Clark sees good reason for optimism. “She has won the big states,” she said. “Good things are happening. She needs to keep working and communicating.”

On the subject of benefits that a bolder message might bring to the Clinton campaign, Clark repeats what her candidate has publicly said: “Barack Obama is touting change,” said Clark. “But Hillary Clinton has the experience in creating change.”

She thinks people will begin to hear Clinton’s message framed in the way she put it early this week. “She said, ‘We need to remake America.’ I think everything she’s talking about is a fit with that.”