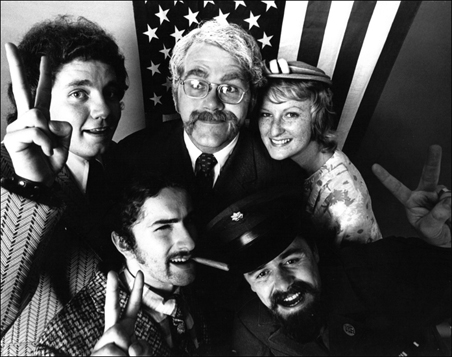 Photo courtesy of the Brave New Workshop
A sign of the times: Dudley Riggs’ comedy troupe skewers the U.S. of A. in this 1968 presentation of “Yankee Doodle Dum Dum.”

The Brave New Workshop in Minneapolis is marking its 50th year with an anniversary show — but what, you may ask, has that got to do with Eliot Spitzer?

For satirists who toil at the BNW or elsewhere, Spitzer’s saga is a perfect example of today’s short shelf life. Last Monday, the story broke that New York’s crusading governor has been a major financial backer of the world’s oldest form of performance art. Within days, Spitzer was bowing out and becoming old news — except, perhaps, for fetishists, moralists (who aren’t big consumers of BNW-style humor anyway) or those affected by Empire State politics. 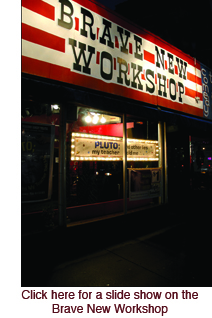 There was enough time at the start of the week for David Letterman to get in a Top 10 routine. At the BNW, however, there was only a chance to get in a few licks at the regular Tuesday night “Six Ring Circus” of student-driven improvisation. The first main-stage show had to wait for the weekend. “Client-9-Gate” is still good for a few laughs, but that whoopee cushion is deflating quickly.

“It’s tough to stay ahead of the curve,” says John Sweeney, who has been running the BNW with his wife, Jenni Lilledahl, since buying it in 1997 from founder Dudley Riggs.

Currency has always been a challenge, Riggs says. Way back in the old days, when Riggs was performing as well as operating one of the few real espresso machines in the Twin Cities, his signature routine involved improvising commentary on stories he read onstage from the “blue streak” edition of the following day’s Minneapolis Tribune.

He abandoned the routine when the newspaper stopped printing the early edition. “It was no longer something the audience hadn’t seen yet, so that took some of the energy out of the idea,” Riggs explains.

Through the years, things have only sped up. “The striking power of theater to come up with something that’s new to the audience has been compromised quite a bit by 24/7 news,” says Riggs, who continues to observe the fortunes of the enterprise he founded. “Still, the workshop seems to be plowing on and the material seems current.”

The anniversary show, “The Brave New Workshop at 50: Old Enough to Know Better,” features sketches and songs from past shows, plus backstage stories and more current tidbits.

The BNW has been at its location in a former bicycle shop at 2605 Hennepin Ave. in Minneapolis since 1965. The scruffy lobby is a bit bigger, thanks to an expansion into an adjacent shop. But the performing theater looks about the same as it was decades ago, when the barbs involved things like Dwight Eisenhower’s mangled verbal syntax and, later, the Vietnam War.

But, in reality, both Sweeney and Riggs say a lot has changed. Or as Riggs puts it:

“Forty-nine years ago, when Castro and I both started, things were different. Improvements have been made in the workshop over the years. In Cuba, not so much.” 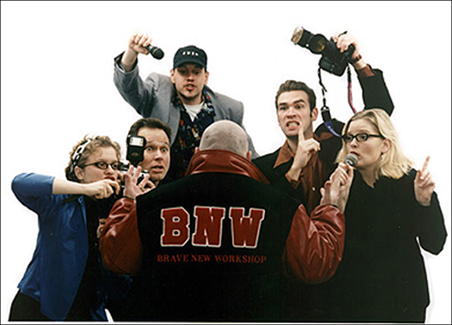 One-liners and the bottom line
The main improvement, according to Riggs and Sweeney, has involved making the BNW profitable on a continuing basis. Sweeney, a former real-estate entrepreneur who chucked it all for show business, said he realized from the start that the workshop would have to rely on something more than ticket and concession income.

“So one of my first smart decisions was to go from paying $40,000 a year in building costs to paying $200,000 a year by opening a theater in Calhoun Square,” Sweeney says, referring to a failed relocation effort. A few years after that, BNW also started staging shows in the renovated Palace Theater in St. Paul; that venture lasted four years.

“As usual, it only took me six or seven years to figure out how it all works,” Sweeney says, adding (dryly), “I’m what you’d call a quick learner.”

During that period, however, the BNW expanded a school for improvisation and acting, called the Brave New Institute, which now involves some 250 students in weekly classes. More significant, it beefed up a corporate division that provides entertainment and training services to businesses. Almost two-thirds of BNW’s income now comes from corporate services, Sweeney said.

“We now have a business model that is more insulated than classical theater from fluctuations in the (entertainment) market,” Sweeney said, sounding very corporate.

Even so, the BNW still cleaves to the mission envisioned by Dudley Riggs when he opened what was then called the “Instant Theater Company” back in 1958.

“Whatever can be said for the method of that theater, it still holds interest for people,” Riggs says. “Somehow or other, we’ve managed to keep something that still cooks the same. I used to ask, are there any groups here we haven’t offended? Hopefully everyone has a big laugh and on the way home they have a big argument about it.”

“I don’t want to seem like a Luddite, but someday, the Brave New Workshop may be the only theater in the country that doesn’t use holograms instead of actors,” he said. “No technology will ever be able to trump that wonderful, intimate moment on stage when an actor, prompted by the audience, finds a subtle and spontaneous nuance — a moment of comedy that has been born right there in that moment and won’t happen again.”