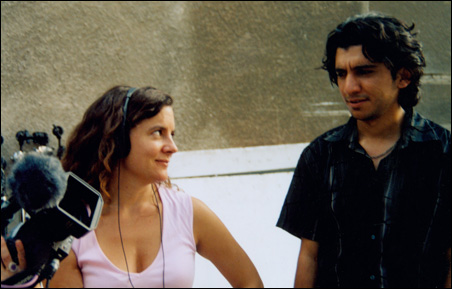 If you ask me, Nina Davenport’s “Operation Filmmaker” is among the richest nonfiction movies in many moons.

The documentary is about an Iraqi film student who’s plucked from the streets of Baghdad to serve as an intern on a Hollywood set (and as de facto star of Davenport’s film).

But why ask me?

Better qualified to weigh in on Davenport’s provocative study of art, aspiration and exploitation are the young students in my documentary film studies class at Minneapolis College of Art and Design.

“Operation Filmmaker” was the first of two-dozen movies they’re screening for this semester, and, given their highly vocal response to it in January, it has been one of the most engaging.

So on the eve of the film’s Minnesota premiere at Walker Art Center, where it screens (for free!) at 7 on Thursday night as part of the “Women with Vision” series, I exploited … er, I mean I asked a few of my students to summon their conflicted reviews for the microphone.

Tess Steube: “It’s a really unbelievable film. The more I think about it, the more I realize that I could easily get myself into that kind of messy situation — either as the filmmaker or the intern. It’s disturbing to think that you could say to someone, ‘Oh, let me help you,’ and then end up making things worse. I think there will be a lot of shocked people at the Walker — because of how the movie exposes the dark side of privileged people’s good intentions. The film is strong medicine. I have some friends coming to the Walker who I hope will get to see it.”

Brandon Boulay: “It is a film about a struggling filmmaker following a struggling filmmaker. They’re both trying to be major film producers. But [Davenport] is a few steps ahead of [Muthana Mohmed], and my feeling is that in the course of making her movie, she basically exploits him. Is it an interesting movie? Definitely yes.”

Mac Plumstead: “I think the movie will elicit extreme responses at the Walker. Our class discussion demonstrated that pretty well. Some people in the class were sympathetic to the Iraqi guy, while others just disliked him from the get-go and felt he was being manipulative. I’m sort of in-between. I think his aim was true initially, but that once he became disillusioned and resentful, he started trying to get even. In the end, both [Davenport and Mohmed] end up taking advantage of each other.”

David McCauley: “I think the movie is a little bit manipulative. In the beginning, [Davenport] has a genuine interest in making an unbiased film about the Iraqi guy’s progress. But then it feels like she becomes manipulative and does whatever she can to make a story. I don’t know whether you can blame her for that or not.”

Critic’s students give high marks to film about intern