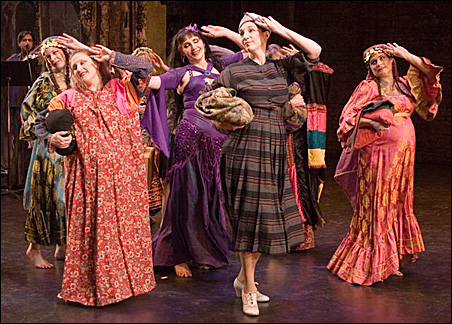 Courtesy of Jawaahir Dance Company
A scene from a Middle Eastern women’s party in Jawaahir production.

Since 1989, Cassandra Shore has been creating theatrical versions of Middle Eastern dance for the concert stage, almost always with a live orchestra consisting of male musicians. This weekend, however, her Minneapolis-based company, Jawaahir Dance Company, will take an unprecedented step.

Jawaahir’s  “Girls’ Night IN: A Look Behind the Screens” takes audiences to a Middle Eastern women’s party, where dance styles mingle, the orchestra is made up of female musicians, and no men are allowed.

“The life force of Arabic women is not generally represented in the media,” says Shore, Jawaahir’s artistic director and choreographer. “What you see are the political sides of Arabic women, whether they are feminist writers and protesters, or women being drawn into the jihad movement and blowing themselves up. The public face is always a political face, along with the repression women in Arabic countries experience.”

At the same time, she says, “People have an impression that women don’t celebrate in the Middle East. They’re always absent from public spaces and from many dance companies, so you don’t see the women’s dances. Being able to see what women are like in their everyday life, how they celebrate, and how they value their lives, is as important as the political side.”

Hence “Girls’ Night IN” offers a rare view of Arabic women relaxed, creative and at play as “tourists are never invited to a women’s party,” Shore says. Drawing on Persian Gulf styles of music and dance, the choreography includes what Western audiences typically consider belly dancing (and which Shore teachers in her school): traditional, Egyptian-style women’s dance. 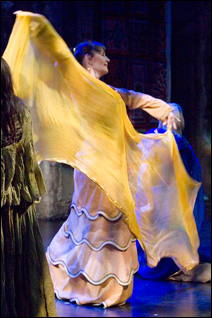 See a dance sample from a different work, “Halaa,” here.

But because Shore has studied folkloric styles from different regions of North Africa and the Middle East, expect a variety of music, costuming and movement. While each area of the Middle East has its own palette of movements, she says, all are based on rhythmic isolations.

The all-women professional group, al Hareem Orchestra, provides the traditional music, while a deejay will spin more contemporary tunes. Clips from MTV, along with Arab rap, hip hop and jazz broadcast in Dubai, will be projected on the Southern Theater’s back wall. “This is a modern party,” Shore says, “and the Arabic world has been influenced by MTV like everywhere else.”

“When Arabic women get together in a safe, female-only environment, their creative energies flow, and they find new forms and styles,” she adds. At the same time, “my fascination with this dance form has always led back to its musicality. The music is very close to the roots of why people dance, which is to express their emotion, joy and the fact that they’re alive on this earth.”

Correction: This story incorrectly referred to the Persian Gulf as the Arabian Gulf. The story has been changed to reflect the preferred term.