It’s not so bad being a champion of small things and overlooked people. Brenda Langton has carved out a niche as the Twin Cities’ own patron saint of uncommon eating habits — although by the time she’s done broadcasting her message about these habits, it’s hard to remember what was so strange about them. 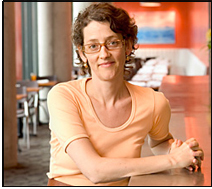 She opened a fine dining vegetarian restaurant, Café Brenda (and published an accompanying cookbook) back when meatless meals were considered hippie food. The success of her second restaurant, Spoonriver in Minneapolis, proves that people are willing to forego flesh now that they’ve learned that the alternatives can be so delicious. And then she moved on to promoting the local food movement, which she believed in long before Michael Pollan came along. At the summer farmer’s market she founded, the Mill City Market, there’s not a cheap banana or South American import in sight. Local farmers and fresh regional ingredients fill every table.

Now she’s doing the same thing for local writers and publishing houses. Every two weeks (starting this Tuesday night), the back of Spoonriver will become an old-fashioned literary salon. A local writer (Bill Holm this week) will read from his or her work, and then early on, close the book and let the conversation flow where it may. The guests will have the opportunity to discuss the work in detail — or discuss anything the crowd is interested in taking up.

“It will be a really intimate environment for people who care about books to get to know a writer in,” says Langton, who explains she decided to start a salon series because it fit into her mission of promoting local ideas, artists and entrepreneurs.

“We really have so many great writers, great publishing houses and resources like the Loft and the Minnesota Historical Society here, and I wanted to make sure people are aware of all the amazing things that are happening on a local level,” she says.

The location of Spoonriver (a next-door neighbor of the Guthrie Theater) puts the restaurant at the center of a lot of this activity — not to mention near the foodie/arty/theater-going/loft-living population that has gathered by the river.

“Food is so in the news now, and people are really starting to understand and appreciate the importance and benefits of eating local,” she says. “This is just an extension of that, really. The way our world is going is really kind of sad, in that we are ignoring our own communities. We don’t have many local bookstores left, and I want people to think about our money and our artists, and are we supporting each other?”

Langton says the series will include fiction, poetry and nonfiction writers, and this summer, the salon will turn to food topics as she brings in local cookbooks authors. “There’s a lot of local writing talent in the food area, and I think people will be really excited about that,” she says.

All good intentions aside, Langton has a dark secret: She doesn’t read very much at all herself these days. “I don’t have time! I’d like to read! I wish I could read more. I always think about these people who make the time, like Bill Clinton, who would stay up all hours of the night reading, and I wish I could be like that. But I’m just so tired!”

But if she can get you reading more, she’ll be tired and happy.