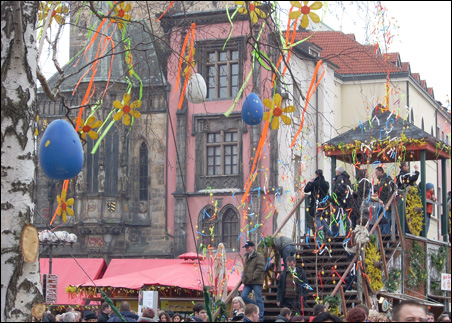 MinnPost photo by Steve Scott
The churches may be empty in Europe, but the colors of the Easter Festival fill the Old Town Square in Prague for several days leading up to Easter.

On a current holiday to Prague, I marvel at these baroque superstructures, as have millions of visitors before me.

The Jesuits erected many of these cavernous sanctuaries long before Communist-dictated atheism imposed itself over the Eastern Bloc. Many of the churches no longer house worshippers, and some charge for visitors to peek inside. At others, passers-by walk in to light candles in the adjoining chapels.

Conversely, given this indifference to institutional religion, the Easter Festival in Prague’s Old Town is ardently celebrated for two full weeks before Easter Sunday.

The smell of sausage cooking over wood fires flows through the sprawling plaza from midmorn till dusk, while pivo (beer) and mulled wine can be had throughout the square. During the rule of Communism (which ended here only 19 years ago), religious observances were discouraged, so this Easter festival was really celebrated as a harbinger of spring. Apparently, it still is.

Despite its nominal religiosity, Prague — and much of Europe, I suspect — inspires a sense of awe. While here, thinking ahead to Sunday’s Christian celebration of Easter, I have discovered that its message comes alive in different ways when one is in a place so historical, so foreign, and so grandiose and stark at the same time. The Word — as Christians say — takes hold in the depth of all the senses that a place such as this evokes. Christians call that mystery.

It reminds me of a passage I recently read from H.B. Swete, in “The Two Greatest Miracles of the Gospel History”:

“A rejection of the fundamental miracles which the Church has from the first learned to connect with the Incarnate Life, if it takes a firm hold upon the thought of our time, cannot fail to issue in a widespread loss of faith in the central mystery of Christianity, and a corresponding loss of the higher life which that mystery inspires.”

On Easter, more than any other day, churches will welcome worshippers in hopes of connecting with that mystery.