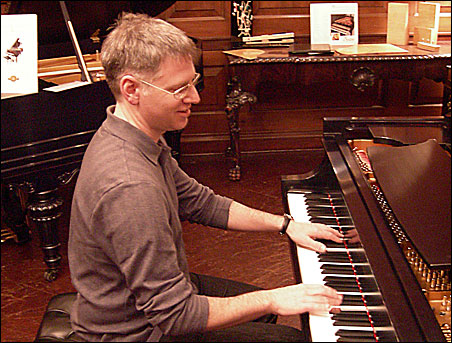 Photo by Marsha Walker
Jeremy Walker tries out a piano during a recent trip to New York City.

In 2003, not that long ago, Jeremy Walker ran a jazz club, led the house band and played the saxophone.

Brilliant Corners, named for a Thelonious Monk tune, was an understated street-level room in downtown St. Paul. The club was beset with problems, but big names came to play — Wynton Marsalis, Matt Wilson — and all ages came to listen because it had no liquor license.

“DownBeat” magazine named Brilliant Corners one of the 100 best jazz clubs in the country, and one night Itzhak Perlman stopped by after his own gig at the Ordway Center for Performing Arts to jam with Marsalis before a sold-out crowd. Having just come from the Ordway and unable to talk my way in, I stood outside with my nose pressed against the glass, kicking myself.

The club closed in 2004. The band played on as the Jazz is NOW! Orchestra until early 2006, when it went on hiatus. You can listen to recordings here.

Also in 2006, Walker’s personal struggles with nerve and joint problems forced him to slow down, regroup and abandon the saxophone, his instrument since childhood.

Someone less resilient might have given up on the whole jazz thing. Instead, Walker has reshaped the orchestra into the NOWnet, a hard-swinging, flexibly sized composers’ ensemble that will perform on Thursday, March 13, at the Minnesota Opera Center in Minneapolis. And he has spent the past two years becoming proficient on the piano and composing new music.

Since returning from New York and New Orleans, where he spent three weeks studying with pianists including Frank Kimbrough and David Berkman on a Jerome Foundation grant, he’s now busy orchestrating the music for next week’s concert.

All original music on the menu
NOWnet will play all original music, mostly Walker’s. Thursday’s band will include Walker on piano; Kelly Rossum on trumpet; Chris Thomson and Scott Fultz on saxophones, flutes, and clarinets; Jeff Bailey on bass and Kevin Washington on drums.

“This will be a preview performance,” Walker tells me in a phone interview, “something that lets people in on the process. It’s been two years since we last performed, and it’s kind of like trying to start an old lawnmower. But there’s a really good atmosphere around it, and a lot of excitement about what can happen this time. We want to bring in as much community spirit as possible.”

He’s serious about the community focus. NOWnet and its support organization, the nonprofit Jazz is NOW!, will be inviting and transparent in ways unusual for arts organizations, he says.

Rehearsals will be open to the public. Performances will be filmed and available to view on the revamped and interactive Jazz is NOW! website, funded by a Metropolitan Regional Arts Council grant, which will go live soon (maybe as early as next week). Visitors to the site will be able to download songs, read blogs, even print out scores and charts. Everything will be free or very low-cost.

“We decided to record everything and let people have it,” Walker explains. “Nobody’s making any money on music anyway. We want to get the music out as much as possible, just give it away. You can pay us when we come out to play.”

NOWnet is in the tradition of performing ensembles like Charles Mingus’s Jazz Workshop and the old Midwest territory bands: fluid, adventurous, ever-evolving.

Regional showcase
Walker is passionate about keeping it regional. “The artistic concept behind the band is to celebrate and showcase regionalism. New York is its own thing, New Orleans is its own thing, and so are we. We live on the prairies, so a certain spaciousness is called for.

“Scott [Fultz] writes that way. I don’t explicitly write that way, but we are products of where we’re from. I recently finished an orchestration that brings acoustic guitar into the NOWnet. As Scott said, ‘Let’s be ourselves. Let’s offer something that isn’t New York.’ ”

The full band (currently nine members) returns later this year, perhaps for the Twin Cities Summer Jazz Festival and again in October. Plans call for two performance series, one with national guest artists and one spotlighting area artists and ensembles. Trumpeter Ron Miles and saxophonist Wessell “Warmdaddy” Anderson are on the guest list. Walker has a personal dream of playing with local legend Irv Williams.

“We’re looking at our place in the community as musicians,” Walker says “I was profoundly influenced by how central music is to people in New Orleans. Whether the music is good or bad, it’s right there and it’s central to their community. I think music is very important here and we don’t always affirm that as much as we should.”

Walker thinks he can do that with jazz? “I believe in jazz, so yeah.”

What: The Jazz is NOW! NOWnet
Where: The Minnesota Opera Center, 620 N. First St., Minneapolis (North Loop)
When: 8 p.m. Thursday, March 13
How much: $10 regular admission/$7 students at the door. No presale.

Minneapolis Trombone Choir 35th Annual Concert: 31 trombones, with help (as if they need it) from euphoniums and tubas. The featured soloist is Douglas Wright, principal trombone of the Minnesota Orchestra. The program is mostly classical and contemporary, with works by Minnesota composers and a little jazz near the end. Judson Church, 7 p.m. Sunday, March 9 ($15 suggested donation; proceeds benefit the Music Fund at Judson Church).