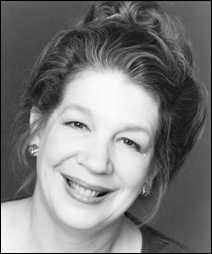 If you think you’re having a busy week, look at the one actor Claudia Wilkens endured at the end of February.

“Richard (Ooms, her husband) and I were going to a movie at the Lagoon on Monday afternoon when I got a call from Don Stolz at the Old Log (Theater),” Wilkens recalls. “He wanted to know if I was free.”

Wilkens’ availability was good news. The Old Log‘s production of Michael Hollinger’s “Incorruptible,” a farce about grave-robbing monks, had run into a snag. Veteran performer Tom Stolz (Don’s son) had been double-cast in the play as Brother Olf, a rather confused member of the order at the center of the play, and as Agatha, the abbess of a rival convent.

As the show went into previews, a couple of issues arose: Tom Stolz was struggling with the quick costume changes, and as the show’s director, he thought the role needed a performer with more gravity.

Enter Wilkens, a standout in the local theater community for nearly 30 years.

She went in that Tuesday, talked to the Stolzes about the role and took the part. While the cast continued with its previews, she spent time at home with the script. Her husband, also one of the most recognized faces in the local theater community, helped her work on the scenes.

By Friday, the show’s official opening night, Wilkens was ready. “We ran through it a few times during the day and then we were set,” she says.

If a photocopied insert in the program hadn’t announced Wilkens appearance, it would have been tough to know that something was up with “Incorruptible.” Though Agatha only has two scenes in the play, both are important — and quite complex, with most of the cast on stage at once.

Wilkens accounted for herself well that first night. Though she was a bit behind the rest of the performers — occasionally searching for lines — the character was already there, and her performance was very funny. Her co-actors assisted her as much as they could without being too obvious.

“I remember that I got a laugh when I entered and that the audience seemed to like it, but most of the first weekend is a blur,” she says about the first night. 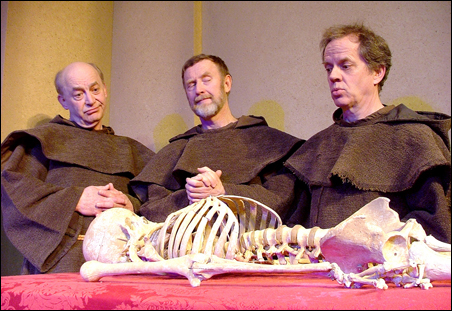 Courtesy of the Old Log Theater
Steve Shaffer (left), Patrick O’Brien and Tom Stolz in a scene from “Incorruptible.”

Since then, Wilkens has grown into the role. “It got better through the first week and now I feel comfortable with it.”

The show has given Wilkens her first chance to act at the Old Log, the Twin Cities’ oldest professional theater. It might seem like a switch for the actor, who trained in New York City, performed with John Housman’s The Acting Company and the National Theatre of Great Britain, not to mention area stalwarts like the Guthrie, Mixed Blood, the History Theatre and the Jungle. Yet she also has a talent for comedy that makes the Old Log a good fit. Her first Twin Cities role was in “The Music Man” in 1982 at Chanhassen Dinner Theatres.

Performing at the venerable theater also gives Wilkens a chance to act with a couple of old friends — Tom Stolz and Steve Shaffer — in a venue they’ve called their own for decades.

And it means she’ll be working a steady gig until the beginning of June, which is always good for an actor — even a veteran like Wilkens. After that, she and her husband don’t have plans apart from possibly taking a summer vacation, something they’ve never done.

Or something else may come along.

“Acting is that way. After a play finishes, you never think you will act again. Then the next day, you have a job for a year.”