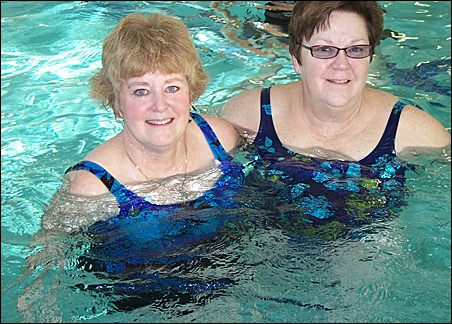 A new fitness center in Chisago City is a talker around town.

And not just because of the facility’s warm-water pool, coffee shop and juicing classes. The center opened in October with a name to match — Vitalize! Wellness Centre. It’s part of Parmly Lifepointes, a continuing-care retirement community with options ranging from independent apartments to nursing and memory care.

The buzz is this: Almost seven in 10 of the fitness center’s 221 members aren’t Parmly residents. They’re people who live independently in this exurb east of Forest Lake and in nearby communities.

A nursing home as a community hub? “I’d go along with that,” said Bev Hughes, a wellness center member who drives in for a water aerobics class twice a week. She and other women in the class have toted potluck dishes to have lunch after class, play a board game and chat. “We enjoyed it and decided we’d do it again,” she said.

I noticed the innovative nature of the center while visiting this winter in my role as a freelance writer for Ecumen, a Shoreview-based corporation that owns and runs Parmly LifePointes and other similar facilities. I stopped to talk with Tim Alm, 66, who was working out with weights on a high-tech machine. His wife, Carolyn, 65, maneuvered a stepping machine nearby. The Alms, who live in a townhome community down the road, told me they’re regulars in the center’s pool and workout room, sometimes alongside people who live there.

Community voices
That’s not the Alms’ only connection to the wellness center. They’re among dozens of community residents who’ve played a key role in shaping the center – some from the ground up – after Parmly’s management organized focus groups on the facility’s future and its place in the community.

Two strong messages emerged from those discussions, said Patricia Montgomery, the wellness center’s director.  “Number one was they wanted a warm-water pool, and number two, they wanted us to help them stay independent.”

The idea to build a state-of-the-art fitness center at Parmly grew out of the focus groups, Montgomery said, along with extending membership to people in the outside community.  A wellness committee, on which Tim and Carolyn Alm now serve, continues to help shape the center and its programs. That means offering feedback, Carolyn Alm said, and such input as “what class do you think should be a go?”

For people who live in the broader Chisago City community, an individual membership to Vitalize! Wellness Centre costs $45 per month; the second member of the household pays $30.  For those who live at Parmly LifePointes, membership is $25 for the first person and $15 for a second.

Though two fitness centers are available in Chisago City and Forest Lake, neither has a warm-water pool, which is a big draw to the Parmly facility, Montgomery said.

Michele Holleran, a Colorado-based consultant who works with care facilities across the country, calls the center’s integration with the broader community “ground-breaking in the sense that I haven’t seen a lot of communities doing this.” That’s despite the fact that many care facilities have fitness centers. “And some very nice ones,” said Holleran, who has studied culture change in the industry.

For people who live at Parmly, the benefits can include a larger window into the outside community, she said. For both groups, there’s the possibility of social interaction, particularly with people of various ages and backgrounds. “For folks who don’t live at Parmly,” Holleran said, “the value is the ability to make use of a resource that’s going to enhance their wellness.”

Busting a stereotype
Montgomery attributes the wellness center idea to “out-of-the-box thinking.” But she admits the plan moved ahead at the 104-year-old facility with some trepidation. Some people worried “that Parmly’s history of being a nursing home would be so strong that people couldn’t visualize it any other way.”

Carolyn Alm said she hasn’t seen evidence of negative response to the center because of a nursing-home stereotype. Nor has she heard it in the 87-unit townhome complex where she lives, where the wellness center is a frequent topic. Several of her neighbors are members, she said.

The center comes up in conversations at her church, too. “One woman who’s in her late 40s asked, ‘What’s the age group? Can anybody join over there?’ There’s this thinking it’s for people who are retired, and that’s not true. You can be in your 40s. It’s just not going to be a place where you can take the kids for family swim,” she said.

Bev Hughes, 75, said her much-younger hairdresser has asked her about the wellness center. “She asked me what I like about it,” she remembers. “I said, ‘I like everything.’ ”