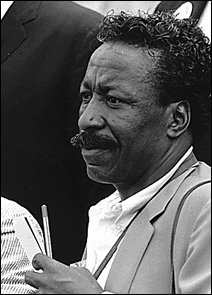 Two years after — and one day shy of — the anniversary of his death on March 7, 2006, St. Paul Public Schools dedicated a new high school in honor of Gordon Parks, a true Renaissance man and the city’s adopted son.

The sparkling new $7.5 million building, at 1212 University Ave., houses the school district’s alternative high school for grades 9-12. It is the only public space in St. Paul named for him, according to his great-niece Robin Hickman.

Perhaps best known for his stunning Life magazine photos during the magazine’s post-World War II prime, Parks also was the first African-American artist to produce and direct a major Hollywood movie, “The Learning Tree” (1969), and,  later, “Shaft.” He also wrote novels and composed and choreographed a ballet dedicated to Martin Luther King Jr.

Unbelievable, when you consider his background. After his mother died, Parks moved from Fort Scott, Kan., to St. Paul to live with his sister. A disagreement with his brother-in-law, however, landed him on the streets and forced him to sleep in trolley cars and work as a busboy to survive.

Parks tribute fitting for school for alternative students
Despite the hardships, Parks persevered. So, it is fitting that a school for kids who don’t fit the mold should be named for him, says Hickman, executive producer of Soul Touch Productions.

While it might have been nice to bestow such an honor while Parks was still alive, the enthusiasm of the participants can’t be faulted. Representatives of business, industry and government, as well as education, spoke last week about Parks and his contributions to the world. (The dedication ceremony is being shown on St. Paul municipal cable several times this month.)

With a standing-room-only crowd in the school gymnasium, “I know he was with us, smiling down on the event,” Hickman said. “He would have been very content in his soul. He was so committed to young people seeking education. And these are students who need to explore their educational potential in different ways. What better honor than an institution of learning?”

Hickman says Parks “didn’t just inspire what I do but how I do it.” She hopes that as the 300 students enter the school’s front doors each day and gaze upon the large portrait of Parks that hangs in the foyer, they will know that “Uncle Gordon will be walking with them.”