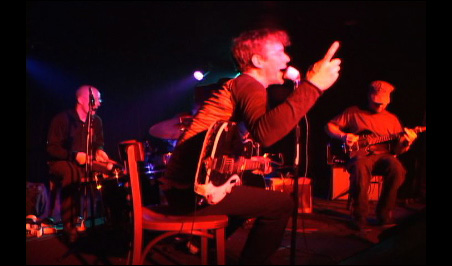 Courtesy of Hansi Johnson
Alan Sparhawk and the Snakes onstage in Hansi Johnson’s ”Cross Country with the Snakes,” which will be shown Wednesday at Bryant-Lake Bowl.

But the “Lounge” may never have been as capital-E Extreme as it will be on Wednesday (March 19), when an all-documentary shorts program will include a pair of raucous sports flicks by North Shore filmmakers: “The Northshore Project” and “Cross Country with the Snakes.”

“Northshore” is totally awesome at the very least, perhaps even wicked and räd. The short, co-directed by Joel Decker and Cliff Langley of Fluid Groove Productions, is nine minutes of whitewater kayaking action made mildly self-parodying by tongue-in-cheek voiceovers.

“People might think that Northern Minnesotans are a bunch of hicks,” the narrator says in a near-whisper at one point. “But this simply isn’t true. We are well-traveled and well-educated.”

Winona-born Hansi Johnson, who lent some footage to “The Northshore Project” and directed the wonderfully goofy “Cross Country with the Snakes,” has studied in Duluth, Madison and Burlington, Vt. (See? Northern Minnesotans are well-traveled and well-educated!) He shrewdly bankrolls his dual affinities for skiing and filmmaking as a sales rep for kayak and canoe manufacturer Wenonah Current Designs.

“For me it’s a total hobby,” says Johnson of filmmaking. “Whenever I’m tempted to make a film, it’s a matter of whether I can gather the strength and the ingenuity. It’s such a pain in the butt for me because I don’t have the cash. And living on the North Shore, I don’t have something like IFP close by to lean on. So it takes a lot of gumption.”

Rocking, running and skiing
True enough. Yet “Cross Country with the Snakes” — equal parts whoa-inducing sporto doc and rock-tour film of the Duluth-based Black Eyed Snakes — came about by chance, through an encounter with Snakes (and Low) front-man Alan Sparhawk. You can see a trailer below.

“For some reason Al had started running,” Johnson explains. “The [Snakes’] drummer, Brad Nelson, was a runner as well. So one day I just ended up running with them. Al and I hit it off — just as a couple of guys going running. Then winter came and Al was like, ‘Well, when are we going for our next run?’ Brad and I were like, ‘Uh, we’re gonna have to teach you to ski now!’

“Eventually the Snakes were going on tour for two weeks in Colorado and Utah, and they invited me along. I was kind of skeptical. I didn’t really understand what I’d be doing. I was like, ‘OK, so I’m gonna come and shoot you guys — but for what?’ Al finally convinced me. He said, ‘Just come along — I like to collect footage of the band.’ I said, ‘Well, the only way I’ll come is if you let us ski.’ Because the Snakes, like Low, are kind of notorious for day-to-day touring. They don’t have off days. They’ll play one gig in Salt Lake City and the next day in Denver. So we made a deal. The band played gigs and skied, and I shot it all.”

What’s your story?
Alas, mountains of ski footage, forgive the pun, aren’t enough to earn a slot in “Cinema Lounge.”

“The key to a film being accepted is whether it has a story,” explains “Cinema Lounge” curator Paul Clark, a staffer at IFP Minnesota. “Production value isn’t everything. I’ve seen some high-end stuff that is so heavy-handed or clichéd that we don’t end up screening it, whereas some no-name kid grabs a camera and a notebook and makes a really cool animation that I can’t wait to show.”

The 30-something Johnson, who describes himself as a “solid amateur,” made “Cross Country with the Snakes” for a grand total of $250. The requisite “story” came to him more than a year after shooting the band’s tour, when Snakes drummer Nelson let slip that, like Johnson, he had a serious interest in the career of Olympic medalist Bill Koch, who took silver in 1976 for his finish in the 30-kilometer cross-country ski race. Johnson had been keeping some old footage of Koch, and, after weaving it in with Nelson’s interviews about a crucial postcard that Koch sent him years ago, Johnson had a movie.

The extreme-sports genre of documentary is on the rise in Duluth, Johnson says. But although “Cross Country” has been picked up by the Banff Mountain Film Festival for screenings in hundreds of venues worldwide, he’s wary of pigeonholing and maintains that the movie is a music film, too. And Johnson’s primary inspiration comes not from other filmmakers, but from Sparhawk.

“The thing I’ve learned from hanging out with Al is that, as an artist, you’ve just got to keep beating your head against the wall as much as possible.”

Which, for the record, is not to be confused with head-banging. The Snakes, Nelson says in the film, play “beat-driven Delta blues.”