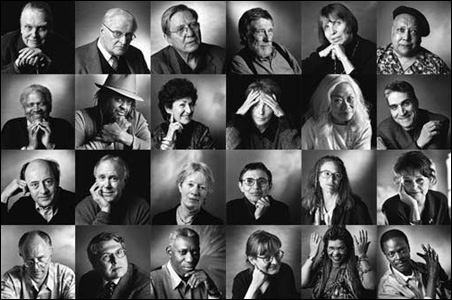 A sampling of Margaretta K. Mitchell’s photos of 40 poets for show at Open Book.

Like radio personalities, poets seem to be nearly faceless creatures. Who knows what these people look like? They don’t make much money. If they drink too much, even U.S. Weekly doesn’t care. Yet, it turns out they quietly yield an enormous influence, particularly upon other poets — and upon creative people from many unexpected walks of life.

To mark the opening of “The Face of Poetry” photography exhibit, opening Friday at the Open Book in Minneapolis, local dignitaries and luminaries who call themselves poetry lovers will read their favorite poems onstage.

The readers will bring a work of their own choosing to the event, and those choices won’t be revealed until they are read. “Everyone may show up with the same poem,” says Liz Petrangelo, chairwoman of the board at the Open Book. “But if so, every reading of it will be different.”

“Poetry is not considered the most glamorous of art forms in today’s culture, but it is an ancient art form, and the language of poetry has been very important to human beings as long as we’ve been able to speak and write,” says Petrangelo. “If you scratch the surface of six people, you may find two who are poetry readers, and you may not have known that. It’s a much greater part of a community than most people realize.”

“The Face of Poetry” is a traveling collection of 40 black-and-white portraits of significant (and even, occasionally, financially successful) poets of our time, including Billy Collins, Maxine Hong Kingston, John Ashbery, Ntozake Shange, Galway Kinnell and Sharon Olds. The 10-inch by 10-inch images, in 17- by 18-inch frames, are hung on three floors of the center.

California photographer Margaretta K. Mitchell captured a wide range of poets from old school and new. She did not, unfortunately, include any Minnesotans, although a few of the featured poets have had their work published by local presses.

If you think poets are grave and ponderous folk, look at these faces: Most wear an expression of amusement, if not outright mirth. Apparently a sense of humor is critical in a poet’s development, whether or not it shows up in their work. How else to deal with years of ramen noodles and ridicule?

But this exhibit, and the many events the Open Book will host in conjunction with National Poetry Month, celebrates the commitment that carries this unsung art onward.

What: The Voice of Poetry: Minnesota writers read poems in a variety of languages, including Korean, Swedish, Japanese, Yiddish, Vietnamese, Spanish and others.
Where: The Open Book, 1011 Washington Ave. S., Minneapolis
When: 7 p.m. Wednesday, March 26
How much: Free
Phone: 612-215-2572
Online

Poets on parade in ‘Face of Poetry’ exhibition