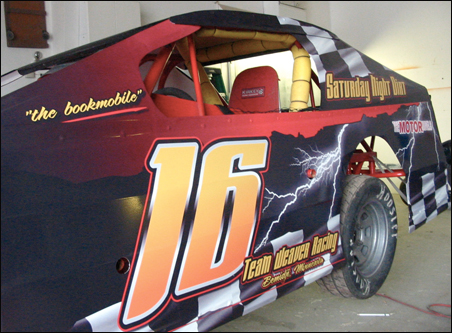 Photo courtesy of Will Weaver
Not Viagra, not cell phones, not laundry soap: Number 16 may be the first race car in the world used to promote books.

Why would a boy want to curl up with a good book when he could drive a stolen car through a major city or punch his buddy in the face for a couple hours, leaving no wounds and no hard feelings? Some parents say the arrival of the Wii video system effectively killed any remaining interest their sons had in books. Virtual reality trumps imagination.

Of course, the situation has been critical for years, according to literacy studies.  Little boys may love their bedtime stories, but by the time they reach the middle school years, many have shut the book on reading. Boys are losing ground against girls in reading prowess, interest in books and writing abilities. Video games, the Internet and television take much of the blame, but another factor is that most writers of children’s and young adult books target girls.

But not all. When Bemidji writer Will Weaver noticed his own son losing interest in books during the middle-school years, he decided to reverse the trend.

His latest effort is “Saturday Night Dirt,” a book aimed at boys who love cars. To launch the book and his new Motor series, Weaver will be at the Mall of America on Monday (March 24) for a reading and to show off his racing car and team. (Yes, you read that correctly. More details ahead. Keep reading, please.)

“My kids had no choice but to become readers — they came from a household of teachers,” Weaver says. “But my son’s friends gave up on reading and turned to video games early on, which made me very sad. I thought, ‘I’m going to write books for middle-school boys and see if I can keep them reading.’ I was very motivated to give boys some quality literature that spoke to their interests, because it didn’t seem to me that there was much out there,” he said.

“Plus, my wife believes that I have a teenage boy trapped just below the surface. He’s 16 and likes to drive cars and do stupid things. I can access that guy pretty easily.” 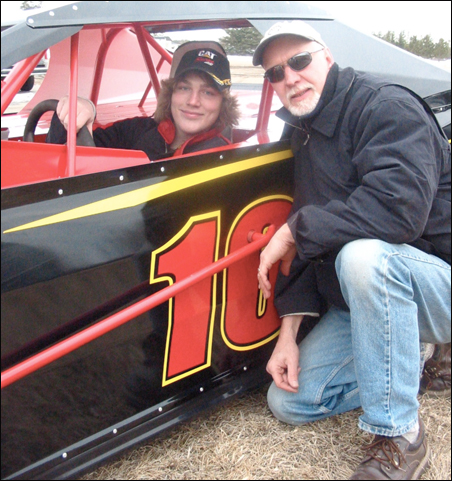 Photo courtesy of Will Weaver
Author Will Weaver with driver Skyler Smith.

‘Sweet Land’ film adapted from his book
Weaver had enjoyed modest success as a quintessential Minnesota writer, pondering rural issues including the farm crisis, white-Native American conflicts, and dying small towns. His short story about Scandinavian immigrant farmers, “A Gravestone Made of Wheat,” was adapted by independent filmmaker Ali Selim. The film, called “Sweet Land,” (“I guess that looks better on a marquee or DVD cover,” says Weaver) came out last year to critical acclaim.

But in 1992 he published “Striking Out,” his first book for boys, and the first in a popular series of three baseball novels. He’s written at least one young adult novel every year since, touching on a variety of sports and adventure themes, as well as deeper emotional and social issues that involve male characters.

In the 15 years that Weaver has specialized in this audience, the climate has changed enormously, and he’s now a forerunner in a wave of writers that write for boys and young men. (Minnesota writers Gary Paulson and Neil Gaiman also share shelf space with Weaver in boy-directed library and bookstore displays.) Today, boys who didn’t know they liked books can usually find something they are interested in reading — except for one group.

“There is a huge, underserved population of boys who love cars, and can’t find books that speak to them,” says Weaver. “They are technically minded, they love car racing, their parents may work in the automotive industry and their lives revolve around cars. They say to their teachers, ‘There’s nothing for me to read.’ So I am doing a series for them now.”
“Saturday Night Dirt” comes out April 1. But on Sunday, he’ll show up at the Literacy Day event at the Mall of America with his own racing team and car, Number 16.

You see, Weaver doesn’t just write to what he thinks his audience will enjoy. He writes about things he loves, and he loves fast cars. “It’s true,” he says. “You can be a motorhead and still like books.”

Correction: Will Weaver will be at the Mall of America on Monday (March 24). This post, which originally said he would appear Sunday, has been corrected to reflect the correct date.