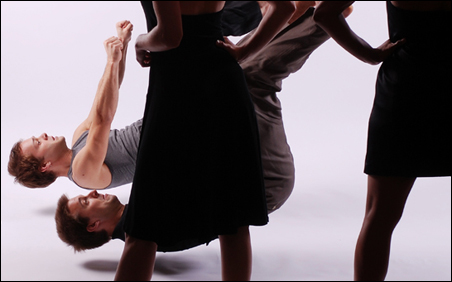 Courtesy of Stuart Pimsler Dance & Theater
A scene from “The Ends of Love.”

Choreographer Stuart Pimsler reminds me about the first time I saw a performance of his “Total Surrender.”

“You were, aaahhh, sort of liked it, sort of not,” he says, hemming and hawing in our phone conversation. In fact, in 2002, I didn’t much like the dance at all. In a review for another publication I called it “earnestly choreographed and danced,” but saddled with “too heavy an emotional weight for his dancers to flesh out, much less bear.”

Pimsler continues with this thread. “You saw the work a second time and wrote about how glad you were we’d had another chance to perform it,” he said, referring to his company, Stuart Pimsler Dance & Theater. Yes. In 2003, I thanked Pimsler for reprising the work, and lauded it for becoming “more complex and profound with each viewing.”

That sort of response “is really common with my work,” he says. “There’s an emotional sensibility about it that really needs to be experienced by the performers, in a performance situation.” By the end of the run, the work has acquired “maturity and insanity,” he adds.

Which is why that this month he’s reprising last year’s sold-out evening-length work titled, “The Ends of Love.”

“Somebody once said that this idea that a premiere is the end of something is really silly,” he explains. “It’s really the beginning of understanding what you’ve made. That’s certainly the case for me.”

Last year, “The Ends of Love” included sexy then violent free-for-alls, and the tender, sensual movements of people searching for connection. There were sassy women, put-upon men, and 9-year-old Gabe Pimsler (appearing mostly on video) romping in the woods and tossing out charming profundities like a trail of philosophical breadcrumbs.

Based on Plato’s myth that each of us was originally half of one creature that was cut in two, dooming us to search for our other half, “Ends” was an anti-Hallmark look at heterosexual romance. It began with a battle of the sexes, and concluded with an elusive sense of wholeness represented by white wooden eggs. Delightful, beautifully performed, but often thematically obtuse, was my overall assessment.

To watch an excerpt, go here.

I’m eager to see the work again, which Pimsler has since expanded with the addition of three new company performers: Brazilian Marciano Silva Dos, who also performs with TU Dance; Kari Mosel, a dancer with Shapiro & Smith Dance; and apprentice Brian Evans, a recent graduate of Gustavus Adolphus College and whom Pimsler believes “people are going to be pretty blown away by.”

The program also includes the premiere of Pimsler’s “Ways to Behold.” This politically charged work of dance-theater was inspired by the headlock (“a movement we were all playing around with one day,” Pimsler explains), and “the allure of comfort and the potential for public disengagement” around images of hooded prisoners and news of beheadings related to the Iraq war.

A reprise of Pimsler’s 1984 “Sentry,” created in the aftermath of the Vietnam War, is on the program, as well. “There is a place in dance to be political, absolutely,” Pimsler says. “If the choreographer is clear, you can see a truth about a statement, in a movement, that could take books to communicate.”

About his work, Pimsler adds, “I want everybody in the audience to come away with something to chew on that really resonates for them. On the other hand, I love layers, which is what metaphor is all about. My first training in terms of composition was as a writer. I wrote a lot of poetry. I still feel my work’s an accumulation of images that hopefully connect to some bigger statement by the end. That’s how I go about making dance-theater.”