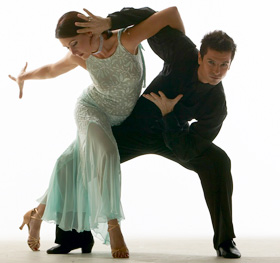 Deanne Michael and Mariusz Olszewski of the Beyond Ballroom Dance Company.

That’s what a co-founder of the Beyond Ballroom Dance Company calls those ubiquitous dance shows stepping into prime time TV.

Nonetheless, Deanne Michael concedes that the huge popularity of “So You Think You Can Dance” and “Dancing with the Stars” has increased curiosity about the Twin Cities troupe she co-founded in 2003.

“Those shows are mock-competitions, they’re entertainment,” she says. “But they also indicate how much time it takes, and how tough it is, to learn ballroom dancing. So there’s a new appreciation, and interest, in what we do.”

What they do will be on display this Thursday through Sunday at the Southern Theater in Minneapolis, where BBDC will present three new shows. The key difference between her troupe and TV, she says, is storytelling.

“While the dancing on TV grabs you, it doesn’t have the Fred [Astaire] and Ginger [Rogers] aspect,” she says. “That era of ballroom dancing was about telling a story. And that’s where we feel we’re taking our work.”

In 2003, Michael and some of her fellow ballroom-dance competitors (all six performers have numerous competition titles and championships under their belts) decided to explore ways they could take ballroom dance away from the competitive aspect and explore it as an art form.

“We all started as competitors and loved that. But there’s only so much you can do with it. It’s extremely restrictive. So what we do is about breaking those rules,” Michael says.

BBDC’s initial production, “Interplay: Dinner for Seven,” was a sexy, witty tale of dinner-party guests with libidos running amok. And who could forget the number to Heart’s thundering “Barracuda”?

“Murder at the Green Lantern Saloon” explored St. Paul’s mafia history through ballroom dance. The most recent show, the 2007 “Spinning Wheel,” took a whimsical look at who meets whom, and what might transpire, while waiting for a bus. 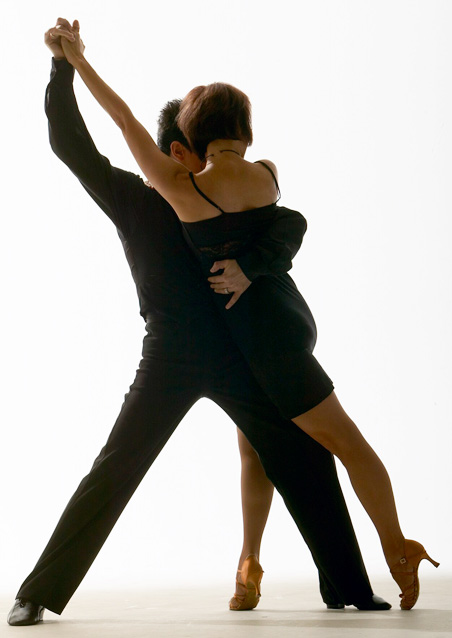 This weekend’s three dances will involve the entire troupe.

• The languid “Lilac Wine,” set to music by Nina Simone, was choreographed by Gary Pierce of Nashville. To watch some of his choreography, go here.

• “Time of the Season” was created by local choreographer Scott Anderson. The piece is set to music from the 1960s and features “just bang-out great dancing,” Michael says.

• “Puppet Master” was created by Montreal choreographer Jean Marc Genereaux, who frequently works for “So You Think You Can Dance.”)  To see one of Genereaux’s pieces for television, go here.

Genereaux also choreographed BBDC member Mariusz Olszewski’s 2005 McKnight Solo, “Tango Emigranta,” a frenetic character piece that displays Olszewski’s physical prowess and precision timing. While working with Genereaux on “Puppet Master,” Olszewski says he often had to remind the choreographer that the piece would be performed on a concert stage with a live audience, not in front of five cameras.

“I told him, if you need me on the stage for eight counts you’ve got to give me something to do, because there’s no camera to cut us out,” Olszewski says, laughing.

Michael says BBDC has always had a following. “People just had to look for us. PBS every year has championship ballroom dancing, and it’s one of their highest rated shows. People are drawn to the glitz, the excitement, and they’re surprised by the level of technical expertise in ballroom dancing. Telling a story with ballroom is where we want to take it.”