Major League Baseball is celebrating the song “Take Me Out to the Ballgame” this season. Written by Jack Norworth in 1908, the song was originally performed in vaudeville acts before catching on with fans. At Monday’s opener, Twins fans auditioned for a chance to sing the sport’s unofficial anthem at an upcoming game. 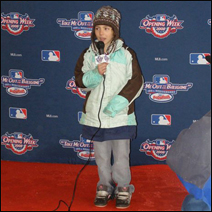 Photo courtesy of Minnesota Twins
Mikaela Schmidt takes her turn at the mike.

Bryce Jasper of Plymouth loves the tradition of belting out the song during the 7th inning stretch. “Everybody knows it,” he says. “Everybody loves it. We all sing it. It just makes you feel good.”

Listen to Twins fans singing “Take Me Out to the Ballgame.”