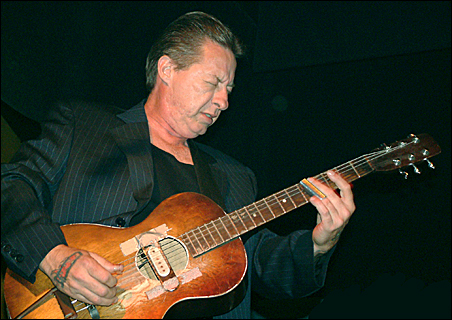 ronhacker.com
In the liner notes of “Mr. Bad Boy,” Ron Hacker thanks HCMC for saving his life the day after he recorded the CD at Famous Dave’s. He returns for a gig Saturday.

Elvis Presley and Hank Williams Sr. were indisputably two of the most important musical artists of the 20th century. Ron Hacker, on the other hand, is a relatively unknown San Francisco Bay area bluesman, even though he has been playing his brand of Delta electric blues for more than three decades now.

When Hacker last played his slide guitar in Minneapolis, he almost died on New Year’s Day 2007 after a gig the night before. His death would’ve been an eerie combination of the untimely passing of two of music’s greatest stars.

Williams died of a drug overdose in the backseat of a Cadillac on New Year’s Day in 1953. Twenty-four years later, the king of rock ‘n’ roll died an undignified death in his bathroom, his pajamas around his ankles, having crawled a few feet from the toilet after suffering a massive heart attack.

Captured live
The heart attack that threatened to take Hacker wasn’t the result of drug usage of the sort that helped end those two remarkable lives. But he was seated on the throne when he felt pain in his chest.

“I almost went like Elvis,” Hacker says quietly, deliberately. “I went to the bathroom and when I sat down there, I started coughing, and my chest, it was like a charley horse in my chest. And my first thought was, ‘God, I’m going to die like Elvis.’ “

A little chuckle escapes as he tells the story. It wouldn’t have been particularly amusing to die at 63, he says, but the circumstances make him laugh in spite of himself.

That near-last gig was captured on tape at Famous Dave’s, 3001 Hennepin Ave. S., Minneapolis. This Saturday (April 19) at 9 p.m., Hacker returns to celebrate the release of his new CD, “Mr. Bad Boy,” which was recorded that New Year’s Eve.

It’s a roiling set of Hacker’s brand of electric Delta blues (you can hear him and his band, the Hacksaws, on YouTube). His guitar, a 1938 refitted hollow-body Regal, burns and rages in his hands. It sounds like a heart attack.

In the liner notes of the new CD, Hacker thanks Hennepin County Medical Center for “saving my ass after I had a heart attack the day after I recorded this.”

Doctors at HCMC placed two stents in his coronary arteries, keeping the blood flowing through the bluesman.

Living the blues
Hacker says he has adjusted some habits since the heart attack.

“I’ve been out on the road for 35 years, eatin’ biscuits and gravy at truck stops,” he says. “That takes its toll.”

After losing 35 pounds and cutting down on red meats and fried food, he says he feels much better than he did a year ago.

All he really wants to do now is keep playing the blues. He also wants to complete his second book about his life. The first one, “White Trash Bluesman,” was about the first half of his life. In essence, it describes a child and young man living the blues.

His father died when Hacker was just 4 years old. Hacker’s mother was unable to deal with the two kids, so they were passed around among relatives and “church people,” recalls Hacker, who was born in Indiana.

Before he was even a teenager, he’d been locked up in a juvenile detention center for breaking into parking meters. That’s where he heard the blues for the first time.

“I was in the juvenile center when I was 11 and that was real popular [music]. It kind of made you cool.”

After he got out, he was returned to his mother, who by then had remarried. But the blues kept following the kid.

His new stepfather had “a nice house with rugs on the floor, matching dishes, and things like that and I didn’t know how to act,” Hacker once told an interviewer. “I was just an animal. They wanted me to sit up straight, chew with my mouth closed and all that kind of shit.”

Didn’t happen. What happened instead was he quit school after eighth grade and left home at 15.

A succession of jobs followed — “carpet-fitter, an Army tank instructor, a bottle-packer, a fast-food fryer, a gardener…and a pimp” — according to his website.

Better Waits than never
When he was 27, after having left the first of his three wives, he bought an acoustic guitar for five bucks and began learning how to play.

More than three decades later, after years of playing in obscurity, he caught a break when he began making plans in 2006 to move to the Twin Cities from his Bay area home. He began telling audiences at his regular gigs at the Saloon, a San Francisco blues bar, that he was moving here. (He was moving here because a booking agent, now disabled by some sort of mental breakdown, Hacker says, was promising him lots of Midwest gigs.)

As it happens, singer and songwriter Tom Waits’ doctor is a Hacker fan and was in the audience at the Saloon. He talked Waits into attending what people thought was going to be the final California performance of Hacker and the Hacksaws.

After the show, Hacker introduced himself to Waits, who immediately asked him to play on his three-CD set, “Orphans.”

They ended up recording “Low Down” together, a raunchy grind of rock ‘n’ roll infused with Waits’ salacious rasp and Hacker’s writhing slide. (You can hear it here.)

“He’s a real personable guy,” Hacker says of Waits. “He’s a real pro. He knows what he’s doing. He’s not weird, either. He’s such a crazy guy when you see him perform, but he was about as straight as anything I’ve seen in my life.”

Whether hooking up with Waits will lead to bigger, brighter lights for Hacker is uncertain. After living here for a few months in 2006, he moved back to San Francisco, where he’s now performing three or four times a month.

“I keep trying to [give up playing the blues], but I can’t,” he says. “I’m in really good shape right now. I’ve got this wonderful girlfriend right now who has this wonderful, beautiful apartment. All I have to do is hang out and just be cool. But I can’t stop. I just keep pushing and pushing.”

He’s not worried about ever being discovered and having critical and commercial success heaped upon him.

“I just want to work,” he says. “But I want to work without being on the phone, you know what I’m saying?”

He hates looking for gigs and haggling with club owners and tour managers and all the rest that goes with being small-time.

He says he doesn’t know why he keeps pushing, why he keeps playing the blues. He says part of the reason for writing his books is that the process might eventually help him to understand himself.

The second installment of his “White Trash Bluesman” autobiography will address, “Why a guy does something for 35 years with just very minimal success, but he just can’t stop,” he says. “I don’t know. Hopefully, when I get done with the book, I’ll understand.”

Singer-songwriter Brenda Weiler is back in town after returning to the recording studio for her acclaimed “End the Rain.”

The CD explores the grief Weiler experienced after her older sister committed suicide in 2005.

The disc was recorded in a week in Minneapolis at Shortman Studio early last year.

Bluesman Ron Hacker is back from the brink