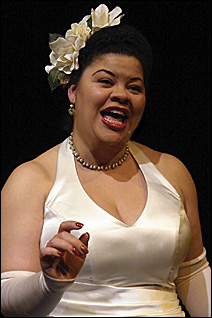 Broke, strung out and just 44 years old, jazz singer Billie Holiday died on July 17, 1959. From now through May 4, she is reborn at the Park Square Theatre four nights a week in the person of Thomasina Petrus, star of “Lady Day at Emerson’s Bar & Grill.”

“Thomasina becomes Billie Holiday, down to the vocals, everything,” says Debbie Duncan, currently appearing in “Blues in the Night” at the Ordway.

Petrus and Duncan not only share the happy coincidence of performing in successful St. Paul shows simultaneously but they also share a director, Austene Van.

If directing two plays at once sounds like a lot, wait. In her spare time, Van is learning her lines for the upcoming Penumbra production of August Wilson’s “Gem of the Ocean,” which opens at the Guthrie Theater on April 22. She will play Black Mary and will be the understudy for Aunt Ester, a 250-year-old former slave.

“I’m tired, and this is not easy,” Van acknowledges, “but I love going to work. I feel like I’m doing what I’m supposed to do.”

Together Petrus, Duncan and Van have enough energy to power the Upper Midwest, or at least keep theater lights burning.

Petrus’s performance, which I saw on the first night of previews and she insists has improved greatly since then, is uncanny. “Most people who perform this don’t sound like Billie,” Van says. “Petrus is amazing. She is supposed to do this role.”

Need proof? Take a look at this video clip of Petrus portraying Holiday.

Preparation started in high school
It’s a role Petrus has pursued since she was a student at North Community High School in the 1980s, when she learned to sing “God Bless the Child” for a Music in the Parks performance at Lake Nokomis. “I was 15 or 16,” she remembers, “and Cornbread [Harris] told me, ‘You can’t be singing that song if you don’t know anything about Billie Holiday.’ He made me go read up on her.”

Not long after, Shirley Witherspoon opened at the Cricket Theater in “Lady Day at Emerson’s Bar & Grill,” a play by Lanie Robertson that premiered off-Broadway in 1987 and earned an Outer Critics Circle award.

The setting is a seedy bar in South Philadelphia a month before Holiday’s death. There are only two characters: Holiday and Jimmy Powers, her pianist-accompanist and friend. In between songs — “What a Little Moonlight Can Do,” “God Bless the Child,” “Strange Fruit” — Holiday talks about her life, her lovers, her longing for children, and the indignities she suffered. Petrus’s mother took her to see the play.

In 1995, Petrus began touring with “Daughters of Africa,” a one-woman show written by Twin Cities playwright Syl Jones for Mixed Blood Theater. “Daughters” chronicles the history of African-American women from slave ship survivors to modern times. One of the women portrayed is Billie Holiday. People started telling Petrus she sounded like Holiday when she sang.

“To me, I didn’t sound like Billie,” she says. “But I appreciated people’s comments and worked more at it.”

Bugging Lou Bellamy
In 2004, while performing in “Diva Daughters DuPree” at the Penumbra, Petrus decided she wanted to do “Lady Day.”

“I bugged the hell out of Lou Bellamy,” she recalls. “I’d say, ‘It’s a one-woman show! Easy to stage! Simple lighting!’ At every break, I was on him.” Bellamy patiently explained that theaters don’t make snap decisions. Petrus would not be deterred. “I told Lou, ‘I’m going to put this play up myself.’ He said, ‘You should do that and quit bugging me.'”

With help from her friend and colleague Austene Van, Petrus found a venue, the Old Arizona Theatre in Minneapolis. Bellamy came over from the Penumbra after hours to offer suggestions. The show ran from Oct. 28-Nov. 21, 2004.

That year Petrus released a CD called “If Only … Billie Unsung.” Using Holiday’s style and phrasing, she recorded songs Holiday might have sung had she not died so young. “I thought, if she had lived just a little longer, who knows what she could have done? Something other than torch songs, maybe something fun. I looked for songs where I could play with time and float over the music, like she did.”

In 2006, Petrus performed at the Park Square in “Constant Star,” a musical based on the life of Ida B. Wells, a former slave and fearless anti-lynching crusader. Artistic director Richard Cook asked the cast if they knew of other works the theater should mount. Petrus suggested (surprise) “Lady Day” for the St. Paul theater.

Her enthusiasm for the play is gale force, and her years of study and preparation make a convincing argument in her favor. Park Square added “Lady Day” to its 2007-08 season.

Tony nominee Marion McClinton was slated to direct but pulled out for personal reasons. Because what goes around comes around, Van got the job. Thomas West, who played Jimmy Powers in the Old Arizona run, is back at the piano in the Park Square production.

“Lady Day” opens tonight (April 18). The previews played to near-capacity crowds. Following last Sunday’s matinee, an elderly man waited with his walker in the lobby until Petrus came out. He told her he had lived in the same apartment building in the 1940s as Billie Holiday.

“He knew her when she was young!” Petrus exclaims. “We sat and talked for half an hour. He grabbed my hand and said, ‘Baby, you are so close.’ “

Eric Bibb: He’s a blues guitarist and songwriter with an impressive pedigree: Paul Robeson was his godfather, John Lewis (of the Modern Jazz Quartet) his uncle. Hear songs and an interview on NPR. One night, one set. The Dakota, 8 p.m. Friday, April 18 ($16/$20).

Christian McBride, Benny Green, Greg Hutchinson: A Tribute to Ray Brown: Legendary bassist Ray Brown died on July 2, 2002, a few days before he was due at the Dakota. Christian McBride is his heir apparent; pianist Benny Green and drummer Greg Hutchinson played in Brown’s trio. This show is the buzz among jazz fans. The Dakota, 7 p.m. and 9:30 p.m. Sunday-Tuesday, April 20-22 ($25-$35).