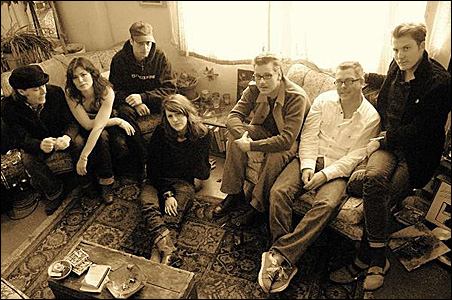 Photo by Tony Nelson
Molly Maher and Her Disbelievers

Deb Ludwig and a couple of her friends lean up against the back bar at Nye’s Polonaise Room as, 6 feet away, Molly Maher and Her Disbelievers roil through Maher’s classic would-be bar romance “Let’s Pretend We Never Have Met.” It’s another Wednesday at Nye’s, which means that Maher and her band — as first-rate a bunch of in-the-pocket country-rock players as can be found in any bar in the country — are seizing the night, the way they have every Wednesday night for the past two years.

With pleasure: At Nye’s, the American flag fights for stage time with a banner proclaiming the Ruth Adams Band to be “The World’s Most Dangerous Polka Band.” If that is so, then it must also be said that the Disbelievers are the most dangerous roadhouse country-rock bar band in the land. Some of the best players in town gather weekly behind Maher to flesh out her honky-tonk-soul-funk-rock originals, and rip it up on mostly obscure country cover tunes.

“I would hope it would be something that’s akin to what used to happen in Nashville, or maybe still does,” says Maher later. “I think a lot of people come down to see Paul [Bergen] play guitar, and Erik [Koskinen]. Paul spent about a year down in Nashville, and he does talk about how on Monday nights all these studio guys would get together at the Exit Inn just to jam, to play what they want to play.”

You can see Maher and her band play here and on her myspace page.

Giving life to the universal
Which is the inherent draw of Wednesday nights at Nye’s. This night, the Disbelievers are guitarists Koskinen and Nick Johnson; bassist Steve Murray; drummer Brad Mattson; trumpet player Paul Odegaard, and back-up singer Linda Crotty. They fall in at their leader’s every turn, guitars crackling like Duraflames in a hobo campfire, drums simmering with equal parts feel, nuance, and power, and vocals giving life to all those universal wayfaring melodies and feelings, creating a sum stew so organic it threatens to be taken for granted in a town where great organic music is the norm.

“It all comes from the heart,” says Murray between sets, about Maher, whose between-song banter, solo shout-outs, and musician introductions suggest an old soul from a time when clubs were populated by dance bands and band leaders. “I’ve been playing with her off and on for eight years, and she really puts her heart into it. I think people come down and connect with that. There’s people in this town who sing a lot better, or who are younger and cuter or whatever, but there’s something real that she puts out and [she] exposes herself, and people are attracted to it.” 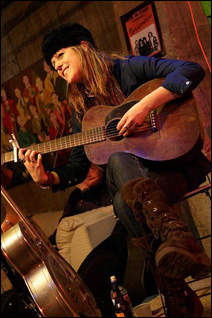 “I love it when the crowd loses itself,” says Maher. “It’s not just us losing ourselves in it. I see men tearing up. We’ve had men standing over us, literally throwing money at us. Fives, tens, twenties. Crazy. There was a period there where that was happening a lot, and one night we walked out of here with $300 extra.”

In keeping with its best-kept-secret status, Maher’s Nye’s residency recently celebrated its second anniversary, to a fanfare of exactly nothing. Still, a two-year run is not bad for an idea that was launched when the club asked a dubious Maher, a regular at Nye’s who would frequently show up to see jam-funk rockers the New Primitives and acoustic duo Shocks and Struts, to take a shot at Wednesday nights.

“We were just finishing up the record (Maher’s CD Balms Of Gilead), and they called and I said, ‘Yeah.’ I figured we’d do it for six weeks and they’d kick us out because nobody would come and we’ll be done with it,” she recalls. “And here we are. It’s just so much god damn fun.”

‘A very generous musician’
Crotty: “It’s a cliché, but we’re like a family, and that’s all Molly. She’s a very generous musician, and the word is on the street that if you pop in with an instrument, she’ll be more than happy to let you play. She’s so approachable and really inclusive and she’s just into the groove and the sharing and the flow.”

While Disbeliever Wednesdays has its share of improvisational moments and wild flights, there is a structure to the schedule. Maher and crew play an hour set starting at 10:15, followed by an hour set from Koskinen, followed by a closing hootenanny that is the highlight of the night for anyone who can last that long on a work or school night. And while the Twin Cities’ club docket includes several staples — the Front Porch Swingin’ Liquor Pigs Fridays at the Eagles Club; the Monday night jam at Bunker’s; B-3 Hammond organ night Tuesdays at the Artists’ Quarter — the Disbelievers’ Hump Day Hoedown has a way of sneaking up on even the most diligent live music fan.

To some degree, the secret is out this night. The Twins have just lost 2-1 to the Angels, and a few baseball fans have found their way over from the Metrodome to the back room at Nye’s. But the rest of the crowd is regulars, gathered once again to see Maher, one of the most popular musician’s musicians in the Twin Cities, who works full time at Willie’s Guitar shop in St. Paul. She has been compared to everyone from Sheryl Crow to Bonnie Raitt to June Carter, and scores of others. But there is truly only one Molly Maher, and for that reason alone these nights feel precious.

“A few months into it when we first hitting our groove, I’d be driving down to the club thinking, ‘Boy it sure would be nice to stay home,’ or whatever,” says Maher. “And then, I don’t know what happened, or what hit me over the head, but I was like, ‘First off, these are some of the best musicians that I could ever have the opportunity to play with, and they want to do this with me.’ Pretty amazing. And they’re also some of my best friends.

“Now I can’t get [to Nye’s] early enough. I’m so excited. And the more people who are coming down and getting into it, it just gives us new life. I don’t want to get the whole god thing going, but I feel blessed. How lucky am I that this bar gives me a place to do this, that they believe in us enough, and that people keep coming down, and the band shows up?”