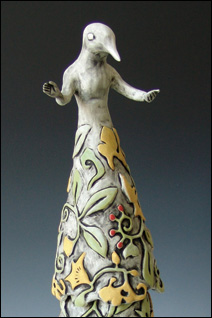 Courtesy of the artist
Pamela Belding finds solace in crows.

If “subprime” was 2007’s word of the year, then “change” is the word for early 2008. There’s climate change. Attitude change. And candidates who say they’re agents of change. In fact, a Google news search turns up more than 400,000 stories featuring the word “change.” That word, and its ability to reshape reality, was the inspiration for Rosalux Gallery’s current exhibit, “On the Verge: Stepping into Change.”

The mixed-media show draws together images that express a desire and reverence for transformation: spirituality, windows and doors, birds and boats. Kate Van Cleve and Pamela Belding have been creating art in the Twin Cities for more than a decade. The show represents personal changes for the artists — changes big and small, and the encroaching ones that cast dark shadows or rays of sunlight, depending on how you see life’s inevitable evolutions.

“Kate and I talked about using change as a theme for the show because our culture seems to be going through so much of it: politically, technologically, spiritually, personally on all layers,” says Belding. Her disparate pieces in the show include bright pastel paintings — where subjects interact with mushroom trees and ride magic dog-like creatures — and stately ceramic totems featuring human-bird hybrids. She also created the centerpiece for the show, “Thresholds,” an installation consisting of tiny ceramic boats that appear suspended in air.

“They take you from one world to another,” Belding says of the boats. “It’s a powerful archetype.”

Birds as metaphor
The exhibit boasts another powerful archetype: winged wonders of all feathers and stripes, from crows to robins to sparrows. For Van Cleve, who received her BFA from Minneapolis College of Art and Design in 1986, the birds floating into her pieces represent the metaphysical world.

In “Home Fires,” a large-scale charcoal drawing, a crow appears in the foreground, its beak blood-red like the dog’s tongue, girl’s lips, high-heel shoes and an exposed nipple in the piece. The crimson images are in stark contrast to the gray and naked tree branches climbing and twisting like family secrets though the interior of the home.

“The birds are a metaphor for spirituality,” Van Cleve says. “Often they can be menacing or have a darker role, but mostly they are ‘God’ for me.” Birds appear and reappear like ghosts in Van Cleve’s images. Many of her works here are collages, images created from tissue paper, magic markers, stamps and cutouts from old books. They’re like childhood reconstructed with found objects.

The birds that appear in Belding’s sculptures and paintings also represent the transcendental, but in concepts more earthly. Belding grew up in the cornfields of Illinois. She imagined the cawing crows were watching over her, allies alerting her when someone was approaching. She chose a crow for the subject of her totem because she always saw them as protectors rather than nuisances. 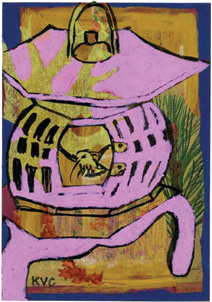 “I’m particularly drawn to crows,” Belding admits. “They’re smart and love to pick out the ‘shiny pieces.’ They are communal and ritualistic, and I feel we have these things in common.”

For Belding, whose work focuses on the art of transformation, those “shiny pieces” are in the here and now, in the moments lived.

“There is the belief that the black crow is a feminine archetype that has to do with transformation of consciousness, which is an idea that I connect with,” Belding says.  “It comes from the carrion crows on the battlefield that broke down the body so that the spirit might be released. I’m aiming for transformation in life rather than death!”

What: “On the Verge: Stepping into Change” exhibit
Who: Artists Kate Van Cleve and Pamela Belding
When: Through April 27. Hours: noon-8 p.m. Wednesdays and Thursdays; noon-5 p.m. Friday-Sunday
Where: 1011 Washington Ave. S. (in the Open Book building), Minneapolis
Phone: 612-747-3942
Online