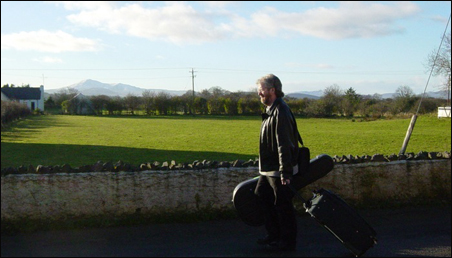 If you think your commute to and from work is a long one, think of the distance guitarist Dáithí Sproule  travels to get together with Altan, the traditional Irish band he has played with for more than 20 years. Sproule lives in West St. Paul, and his band mates make their homes in Ireland.

Luckily, he only makes the 3,800-mile commute four or five times a year: when he begins tours of Europe and elsewhere or when he records with Altan.

“We’ve been playing together for more than 20 years now, so there isn’t much need of rehearsal,” he says. “If there’s new material, you just have a tape of it and you get up and play it.

They do exchange MP3s of new songs. “Often, years ago, people used to play tunes to each other over the phone,” he says with a laugh. “And you would have your little tape recorder to the phone, and you’d be trying to rehearse the thing later at very low volume and with all this distortion.”

Dreaming of a green Christmas
Sproule spent Christmas and New Year’s in Ireland for business and pleasure. “If [Altan] has a tour or gigs in Europe, or a tour over in that direction, I always take that opportunity to go to Dublin to hook up with them and then go off.”

He spent holiday time with his mother in Derry, then at an Altan festival in Donegal, where he taught guitar and performed. (You can watch Sproule perform here in a YouTube video.)

Sproule says he’s going to be in Minnesota for about a month, during which there will be a party celebrating the release of his new solo CD, “The Crow in the Sun,” at 8 p.m. today (April 4) at the Cedar Cultural Center, 416 Cedar Ave. S., Minneapolis.

All but two of the tunes are original instrumentals composed over most of the 57-year-old’s career.

“They’ve been composed over a period of more than 30 years. Really, basically, ever since I started playing the guitar I’ve made up these instrumentals of different sorts.”

Not fade away
He says the songs, like his solo CDs (this is his second one), come slowly; one or two per year. Nevertheless, the backlog of unrecorded material built up during the decades.

“For years and years, I’ve just had this idea that I should record a batch of them, so that’s what I’ve done.”

That’s when he was a university student in Dublin playing with the group Skara Brae. He soon began playing the clubs and doing session work there, before finding his way to Minneapolis in 1978.

That’s where he met his first wife and decided to settle down, happy in a place where there’s a lively Irish community and music scene.

Stories in strings
He says “Crow in the Sun” is an autobiographical journey for him. But it’s one without words; the story is instead told in exquisitely wrought melodies plucked out precisely and passionately on his acoustic guitar.

“The first few years you’re playing an instrument, you’re trying to find a style and you’re more influenced by people. So the oldest tunes were influenced by some of the great English guitarists, Bert Jansch and John Renbourn, who used to play with Pentangle. So those kinds of songs were very much in my head.

“After a couple of years, any serious musician has to find a style or their own feel. After that, any of the tunes or style might be something I made up yesterday or something that I made up a long time. But I think gradually, I think my playing, my ability to play the tunes nicely has improved with the years, I hope.”

The CD is an autobiographical trip for Sproule, but his life’s journey is one of playing traditional Irish music in front of crowds around the world. So what’s a traditional musician doing playing new music?

“Any traditional musician, any musician in any era, has their ears open and you’re listening to more than one sort of music. So really, what has happened to me is that traditional music, which I really love, is a part of my life and it’s something that was around me from the beginning, and it has dominated what I’ve performed as a public performer … but at the same time, every musician I know has other music in their head.

“Also in your head, you have other sounds and other feelings that can maybe only be expressed in some other way and that would be true of these tunes. They’re not really Irish, they’re not American, they’re not anything — they’re just me.”