Most cookbooks are written by “experts”: chefs, food scientists, celebrities — or their wives. But it’s really the good home cook who becomes an expert. Without a menu, within a budget, and often for an audience of picky eaters, these cooks turn a daily chore into an art.

Alice Tanghe is one of those artists. As a fifth-grader, she started cooking for her family. Her specialties included a colorful ’60s-era Jell-O product called Whip ‘n Chill — just add milk and blend. “We had it all the time. I put it in fancy glasses,” she said. “My sister was reminiscing about it, and she said, ‘We must be so well-preserved from all the chemicals in that stuff! But you always made it pretty.’ “

The girl who served chemical goo with such pride has expanded her repertoire just a bit — with the help of a 500-volume cookbook collection — and she long ago gave up processed products in favor of locally produced whole foods. Her new book, “The Minnesota Homegrown Cookbook” (Voyageur Press), showcases 100 recipes from 35 regional food producers and restaurants, the kind of places you take visitors to when you want to prove that Minnesota cuisine doesn’t mean hotdish. Appetizers from the New Scenic Café, soup from the Angry Trout Café, Trotter’s Café’s scones, Heartland’s cassoulet, and Hell’s Kitchen’s Mahnomin Porridge are secrets no more, thanks to Tanghe and co-writer Tim King, who coaxed secrets and stories from these and other advocates of local eating. It’s a long way from Whip ‘n Chill.

The awakening: growth hormone in milk
“When I was first married, I had a garden, bought pigs and cows, canned, made all my bread for the first 10 years or so. Then I got too involved in corporate life [in the electronics world], and stepped back. There was a lot more eating out. I came back to the local food idea when they put that growth hormone in milk. “I just thought, why? Why? Why are they doing this to our food?

“It was like an awakening to me. I didn’t want chemicals in my food anymore. I stopped buying almost anything processed. I realized that you can create flavors so much better when you have whole foods.”

Tanghe became involved in the local food movement as a consumer, and favors Cedar Summit Farms dairy, Ten Thousand Hills grass-fed beef, Hope Creamery butter and produce from CSAs and farmers markets. She took time out from the electronics world to produce a monthly food publication, Minnesota Palate, and after it shut down, she stayed involved with the local food community. When nonprofit Renewing the Countryside got a grant to create a cookbook, she became an editor, writer and food tester, making sure a home cook could replicate these restaurant recipes. 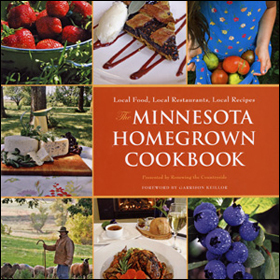 Friends as tasters
“I’d invite friends, people from church over, and I was like a short-order cook. They would fill out little sheets, telling me what they liked and didn’t like,” she said. The end result is a combination of recipes, stunning photographs and background stories.

The stories, say Tanghe, are her favorite part. “I read cookbooks like other people read novels. The ingredients are characters for me, and I love learning about the history of the recipe or the chef.” she says. Each restaurant or producer is profiled, and an introduction by Garrison Keillor extols the virtues of the homegrown tomato.

“These are not people who are jumping on the locavore bandwagon,” she says. “They have always understood that local food just tastes better, and it’s better for our community and our environment. Why are we shipping flavorless food in from around the world when there are such wonderful things being grown here? When you spend time with these people, it is so obvious that they care. And the food is incredible.”

What: Living Green Expo
When: Saturday and Sunday, May 3-4, 10 a.m.-5 p.m.
Where: Minnesota State Fairgrounds