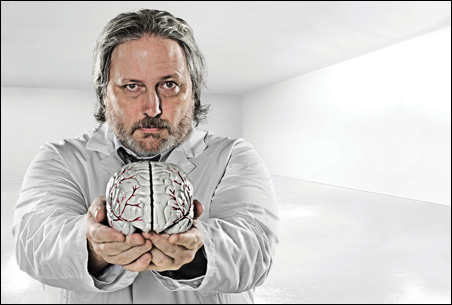 How do our brains work?

That’s the central question in “Broken Brain Summit,” the latest work from Interact Center for the Visual and Performing Arts, the Minneapolis group that offers training, performances and exhibitions for artists with disabilities.

At different points during the play, the action pauses and the show’s erstwhile leader, Dr. Dendrite, tries to bring the assembled researchers to some kind of conclusion. “The brain is…” he starts. A cacophony of ideas ensues, as each participant has a very clear, and very different, answer.

Those answers seem to come from the heart of each participant. Writer Amy Salloway worked with Interact artists to craft the script, which tries to uncover the true workings of the brain through those who have suffered from malfunctions and tried to regain their balance. Many of the “Summit” actors have brain injuries or other disabilities.

And perhaps it’s no surprise that the creation of the show was as seemingly complex as the brain itself. The collaborative piece has been in development for several years, with multiple versions produced in workshops and at festivals, all leading up to the show’s “premiere” at the Old Arizona Theatre in Minneapolis.

A variety of perspectives
The show presents a number of stories, from an accident victim trying to rebuild his life with a new personality to those dealing with mental illness to a young man trying to drive away the chaos in his head with death metal music. It’s all told with humor and real heart-wrenching drama — especially potent if you’ve ever had a family member or close friend contending with these issues.

The piece started as “Crash,” which became its own kind of wreck, notes Interact Artistic Director Jeanne Calvit.

“Some of the actors were stressed because they could not memorize lines; they would work all weekend and by Monday none of the lines ‘stuck.’ Because of this we decided to let some actors use their script. I thought the first script focused on the ‘accident’ without showing the humanity and humor that these people possess,” she says.

Salloway was brought in to work with the company, which began to mix in older stories with new ones being crafted. The company saw the power of the material last year at a one-night reading at the Playwright Center. “It generated a ton of laughter and emotional response from the audience. The cast had an ease with their characters and the dramatic material that allowed the material to soar,” says show director Scotty Reynolds.

From there, the summit went to the 2007 Fringe Festival, where a compact version drew a strong audience reaction. All of this development time has been a great boon to the show’s creators and the large cast.

“Our actors are relishing this challenge and the extra time we’ve put in on this project has allowed them to excel, and be flexible to the many drafts this project has undergone,” Reynolds says. “The music has become bigger and grander, reinforcing the power of the stories. Bringing guest artists and designers into the process has given the actors extra tools to reinforce their work and pull the audience into the world of Dr. Dendrite’s laboratory.”

The extra time also gave performers a better command of the material, says Calvit. “This is really crucial since most of the actors have significant brain injuries and some have other physical and mental conditions that require a more lengthy rehearsal period.”

The summit will likely have a life beyond the run at the Old Arizona Theatre. Versions of the show have already been presented for Leadership Exchange on Arts and Disability and one for the Hennepin County Integrated Care Initiative.

“The topicality of the show hit strong among audiences working in the field of human services and those interested in theatrical entertainment. We are very excited about the continued potential of this project,” Reynolds says.