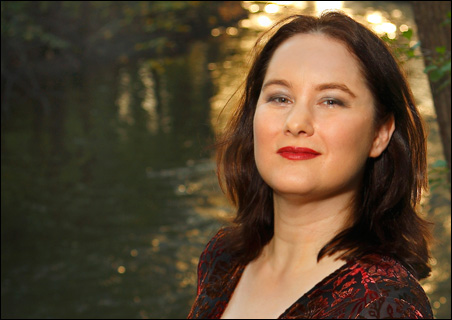 Photo courtesy of katiemcmahon.com
The release of singer Katie McMahon’s “St. Patrick’s Day” CD will be celebrated Saturday at the Cedar Cultural Center.

Singer Katie McMahon is a set of interesting contradictions. She’s a native of Ireland, but lives in Minneapolis. Her new CD is titled “St. Patrick’s Day,” but the party celebrating its release is a month after the holiday.

McMahon is best known for starring in the massive, upright Irish dance show Riverdance, but her own dancing is limited to country swing. She has toured with New Age icons Secret Garden, but she also enjoys getting out to a pub now and then to down a pint or two.

McMahon laughs easily when asked about the paradoxes dotting her life.

St. Patrick’s redux
She explains that her CD release party on Saturday, April 12, at the Cedar Cultural Center, 416 Cedar Ave. S., is calculated to dose people on Irish music after the big, green injection available on St. Patrick’s Day. You can hear samples of the CD here.

“There’s so much Irish music happening around St. Patrick’s Day, that I thought I’d wait. People might’ve gotten over their March fix and want more in April,” she says.

The CD is a mix of traditional and contemporary Irish folk music, all carried by her silvery soprano. Highlights include “St. Patrick’s Prayer,” which opens with a mournful Latin chant, morphs into what sounds like a pagan call to the sun, and then closes with musical and lyrical adoration of Jesus.

Though she can’t count the song as something entirely original, the weave of melodies and tones are McMahon’s doing.

“[The song] is semi-written by me,” she says, laughing. “The words are by St. Patrick, but I basically took some really old tunes and set them all together in a way that had never happened before. So it’s, strictly speaking, an original tune now, because the melodies are so old.”

She says she’ll perform all of “St. Patrick’s Day” with her band, plus some new material and a song or two from her previous CDs. When asked if she would perform anything from her Riverdance days, there’s a pause.

“If someone shouts out [a request], yeah, we would do it,” she says finally.

Riverworld
It isn’t as if McMahon is embarrassed by her work for the one-time danceshow phenomenon or by her work with Anúna, the respected Irish choral group that was, in part, folded into Riverdance.

She’s not opposed to looking back, she says. She sometimes listens to Anúna and Riverdance recordings.

“It’s quite a trip and it’s nice to get nostalgic,” she says. “Being in Anúna had its ups and downs but that was a very exciting experience. We really started off as a small group that didn’t pull many people to our concerts and then we got extremely successful and U2 would come to our shows. It was very exciting.

“With Riverdance, it was instantly so enormous,” she remembers. “And the music for both groups was very good music that I was proud to be doing. It wasn’t, ‘Oh god, this is embarrassing.'”

McMahon said the performers in Riverdance understood that a tipping point in the public’s appetite would be reached. Soon, the Irish step-dancing spectacle began to be a source of laughs.

“I think in a funny way, you almost have to be flattered when you see a Riverdance sketch happening on SNL. It’s kind of like, ‘Hey, we’ve arrived. We’re a part of the culture.'”

Journey to Minneapolis
If you watch the YouTube video of the performance that launched the Riverdance phenomenon — the group’s acclaimed assault on the senses at the 1994 Eurovision song contest — McMahon’s face and voice are what you see and hear first. Within moments, the poofy-shirted Michael Flatley takes over, of course, with his trademarked hokey hoofing.

McMahon admits that sometimes Flatley, who stomped off of Riverdance over creative differences, re-emerging with a spin-off, Lord of the Dance, was a bit much.

“To my mind, Riverdance was a much classier show,” she says.

She left Riverdance in 2000. She says she has seen audiences for the performances diminish, forcing the mammoth shows themselves to shrink.

“They’re about half the cast we had,” McMahon says.

Back in the day, however, Riverdance was playing at the Orpheum Theatre in downtown Minneapolis with McMahon belting out “Home and the Heartland” and other soaring, pounding favorites.

That’s where McMahon, now 38, met her future husband, Ben Craig, who worked at the theater.

“His title was Artist Relations,” she says with a laugh, “which was ironic.”

Craig took the Riverdance singers out for an evening of fun at nearby Lee’s Liquor Lounge.

“That’s where we got to know each other and know how to do some swing dancing.”

The couple still occasionally steps out, she says, when she’s not busy with her career and he’s not busy playing with his rockabilly band, Stockcar Named Desire, and they’re both not busy taking care of their 2-year-old.

This note’s for you
McMahon will be joined onstage at the Cedar by Zack Kline on fiddle, Karen Mueller on guitar and autoharp, Marc Anderson on percussion, Jenny Russ (backing vocals) and Irish stepdancers Cassia and Jenna Gille.

Doors open at 7 p.m. for a reception for ticketholders sponsored by Guinness. Translation: free, black beer.

McMahon won’t be partaking of any brew before the show, however. She says the stuff isn’t conducive to making her style of Irish music.

“I’ve got a really high voice and if I have something to drink, it just doesn’t work really well,” she says, breaking into laughter. “I admire people who can get up after a couple of pints. It’s never something for me to do, I know from past experience.”