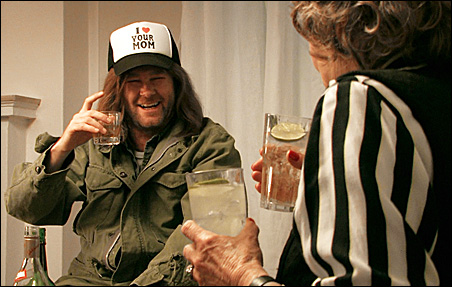 Norwegian Film Institute
Fridtjov Saheim stars in the “The Art of Negative Thinking” from Norway.

Norwegians are nuts, East German pop stars are awesome, and Planet Earth is doomed: These are the lessons of my Minneapolis-St. Paul International Film Festival picks for today (Wednesday) and Thursday, all screening at the St. Anthony Main multiplex.

• “The Red Elvis.” Ever heard of Dean Reed, the Denver-born dude who hit the pop star jackpot in East Germany before biting the dust? If not, this too-good-to-be-true documentary will look a touch like “Spinal Tap” meets “Viva Las Vegas” in Berlin. Believe it or not, the ludicrously studly and actionably Elvisesque Reed used his ample sideburns and unlikely stage fame as platforms on which to espouse “red” causes including the late Chilean president Salvador Allende. Interviewed subjects run the gamut from actor Armin Mueller-Stahl, who likens Reed to Brad Pitt and Tom Cruise, to a Yankee talk radio host who considers the anti-Reagan expat American crooner to have been unforgivably traitorous. Then there’s the hyper-obsessive female fan who convincingly claims she could discuss her hero for hours — and does her best to do so, fighting back tears. The movie’s message to fledgling American artists looking to make it big: Move to East Germany! (Wednesday at 7 p.m.)

• “The Planet.” Less prosaic than “An Inconvenient Truth” and less pushy than “The 11th Hour,” this award-winning climate-change documentary from Scandinavia makes its most striking points visually, with shocking images of species extinction (including the slow deaths of wild gorillas) and not-unrelated shots of urban high-rise construction. The words resonate, too. The Amazon is becoming like Swiss cheese, opines one talking head professor, while another carefully dismantles the dangerous nature-film convention of making human influence seem invisible. Much to its credit, “The Planet” includes our crushing footprint at almost every turn. (Thursday at 5:20 p.m.)

• “The Art of Negative Thinking.” Norwegian writer-director Bard Breien’s politically incorrect farce features members of a disability support group who barge into the home of angst-ridden, suicidal Geirr (Fridtjov Såheim) at his wife’s request, attempting to get the man’s wheelchair rolling again. Turning the tables, our longhaired hero, who digs Vietnam flicks and Johnny Cash LPs, encourages the inmates to take over the domestic asylum, where they engage in backyard cricket, sexual hijinks, and Russian roulette en route to the requisite group hug. Running a blessedly brisk 78 minutes, “Negative Thinking” is nowhere near as boundary-pushing as Lars von Trier’s decade-old “The Idiots,” Breien’s obvious inspiration. But anyone looking to laugh at Norwegian cultural norms — inside a movie theater, that is — could do worse than this. (Thursday at 7:10 p.m.; also Friday, April 25 at 5:10 p.m.)

Other notable M-SPIFF screenings through Tuesday:

• “Dot.com.”A Portuguese comedy about a small village’s attempt to launch a website over the objections of a multinational corporation. (Tonight at 5 p.m.)

• “Mondo Bondo.” London-raised director Tony Cane-Honeysett will be present for the screening of his documentary about the kinkier ties that bind. (Wednesday at 7:30 p.m.)

• “Dry Season.” A 16-year-old orphan in central Africa waffles over whether or not to avenge his father’s murder in this drama from Chad-based director Mahamat-Saleh Haroun. (Thursday at 7 p.m.; also Sunday at 9:15 p.m.)