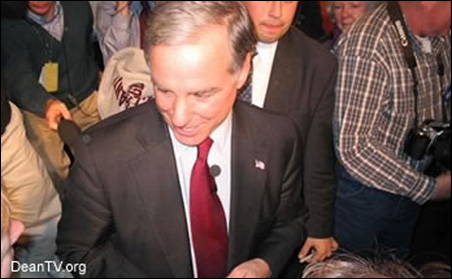 DeanTV.org/Heath Eiden
One of the politically minded title characters (the famous one) in the documentary “Dean and Me.”

Good news: Cinematic dissent isn’t just for documentaries anymore, not when totally fictional buds like Harold and Kumar can escape from Guantanamo Bay before partying down with ol’ Dubya at the Crawford ranch.

Still, the “H&K” sequel — opening in theaters today — has only about a half-dozen laughs by, uh, conservative estimate.

And the Minneapolis-St. Paul International Film Festival, continuing through May 4, offers human comedy of the real variety through a slew of documentaries, including my three M-SPIFF picks for this weekend, all screening at the St. Anthony Main multiplex unless otherwise noted.

“Disconnected.” Non-virtual reality — what a concept! This casually ingenious hourlong doc contrives to strip well-wired Carleton College kids of their all-important connections. Three weeks offline? In no time flat, eight students — who co-created the movie under the supervision of Carleton teacher and doc film doyenne Melody Gilbert (“Whole”) — suffer massive Facebook withdrawal and such. They’re forced to discover, like, newspapers! Manual typewriters and Ms. Pac-Man! Walkie-talkie wristwatches! Physical geography! You don’t miss the water, as another generation used to say.

Taking the most practical approach to her addiction, young Caitlin duct-tapes her laptop in a box and puts it on the top shelf –“psychologically symbolic,” she says. (No wonder the kid has an “Apocalypse Now” poster in her room.) “Disconnected” is consistently funny, philosophical and self-critical, daring to make its subjects appear occasionally pathetic even as we feel their pain. The students’ sheltered privilege might be as exposed as frayed fiber-optic cable here, but how well would you fare without access? “The Real World” meets the real world; the charismatic stars of the doc will be in attendance — like, really! Grade: A. (Sunday at 5 p.m.)

“Pond Hockey.” Director Tommy Haines’ handsomely shot ode to ice-cold outdoor puck-slapping draws on everything from Thoreau’s “Walden Pond” to Boston’s “Peace of Mind” in its bid to make pond hockey look like Buddhism for Midwestern boys of all ages, including 30 and beyond. Culminating in the overtime game of the U.S. Pond Hockey Championships on Lake Calhoun (no kidding), the documentary features the fanatically high-stickin’ likes of Sofa Team Lazy member Dave Miller, who lives with his grandma, and natural-born Gopher Jeff Sorem, who admits he’s somewhat disappointed to have gotten a full ride not at the U, but at Yale(!).

New York Times contributor Charles McGrath shows up to espouse the merits of pond-based “noodling,” but the players prove articulate, too — at least if you consider they use words such as “instinctual” along with “awesome.” The end credits give special thanks to “Mayor RJ [sic] Ryback [sic].” (Wednesday at 7:30 p.m.; also Friday, April 25 at 7 p.m. at Oak Street Cinema)

“Dean and Me: Roadshow of an American Primary.” Director Heath Eiden will be on hand to introduce the U.S. premiere of his up-close and quite fascinating portrait of the Howard Dean campaign from its modest launch in Vermont to the “scream” heard ’round the world. Most of the film was shot, naturally, in 2003 and 2004, but its release in ’08 hardly requires us to remember a time when presidential candidates faced all manner of treacherous spin on the trail. And Eiden has an invaluable time capsule here, as his film captures the first stirrings of a seismic shift in the media landscape, where the likes of DeanTV.org come to seem as influential as “CBS Evening News with Katie Couric,” if not more so. Dean and his pajama brigade in the blogosphere may have lost the presidential battle, but not necessarily the news war.

“Encounters at the End of the World” (Thursday at 7 p.m. at Block E multiplex)