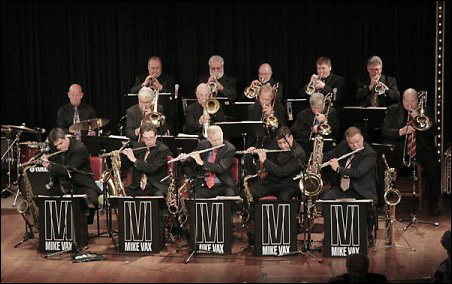 Before Beatlemaniacs, there were Kentonites — serious fans of big band leader Stan Kenton. He filled concert halls with a “Wall of Sound” when future music producer Phil Spector was a boy in the Bronx.

Kenton died in 1979 but remains a jazz cult figure on par with Sun Ra and Chet Baker. His music lives on in the Mike Vax Big Band from Los Angeles, which will perform on Saturday, May 3, at the Ted Mann Concert Hall.

Vax was a trumpet soloist in Kenton’s band; many other members of his band are Kenton alumni. His show will be more than a blast from the past.

“This is not just a nostalgia band,” says Jerry Swanberg, host of KBEM’s “Big Band Scene.” “Half their tunes are contemporary big band charts written by great L.A. arrangers that tie into Kenton in some fashion. Stan Kenton’s style was very contemporary for its day.” 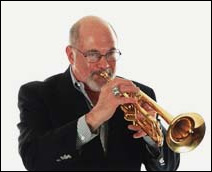 Swanberg has high praise for the trumpet section: “It’s truly an all-star lineup. All played with Kenton and with other people like Maynard Ferguson and Woody Herman. Four out of five lead their own big bands. All the sections are great, but the trumpets are special — in my opinion, some of the best in the world.”

With five trumpets, five saxophones, five trombones, a rhythm section (piano, bass, drums), Latin percussion, and two vocalists, the Mike Vax band carries on the Kenton sound: big, bold, and brassy. “I love the stuff,” Swanberg says. “They swing as well. I think it’s going to be a great concert.”

Uncertainty about the future
The Mike Vax show is the final concert in the 2007-08 Northrop Jazz Season, a program of the University of Minnesota’s Department of Concerts and Lectures. Some series subscribers, including this writer, have wondered if it might be the final concert of the penultimate season.

Now in its 15th year, the Northrop Jazz Season was launched in 1993 by Dale Schatzlein, the Northrop Auditorium director who also created the Northrop Dance Season. A lover of the arts and active collaborator with other Twin Cities arts organizations, Schatzlein died on Aug. 31, 2006, while mountain biking in the Colorado Rockies.

Like the death of longtime Schubert Club head Bruce Carlson a month earlier that year, Schatzlein’s passing was a blow to the Twin Cities arts community and beyond. Both were known as visionaries, seekers and relationship builders. Schatzlein had run Northrop for 21 years, Carlson the Schubert Club for 38 years. How would their programs survive without them?

Carlson had battled leukemia since 2002. Schatzlein’s death was sudden and unexpected. The Schubert Club named Kathleen van Bergen as its new executive director in January. Northrop currently has an interim director, Sally Dischinger, and is running an ad for a director of concerts and lectures.

During its search for a new director, the Schubert Club communicated frequently with subscribers by mail and email. Its 2008-09 International Artist Series, the organization’s flagship series, was announced in March and subscriptions are being sold.

In January, a publication called the “Northrop News” arrived in my mailbox in a glassine envelope. A message from Dischinger included these words: “I have also begun previewing and booking performers for the 2008-09 Jazz Season. Watch your mailbox for an announcement in the spring!”

Not a peep since then.

Why the series matters
Why does it matter if the Northrop Jazz Season endures? Because live jazz keeps jazz alive. Because the prestigious series has broadened and deepened the music scene in Minnesota and made the Twin Cities a destination for international jazz artists.

The list of performers from the past 15 years reads like a Who’s Who of Jazz, with an occasional “Who’s That?”

It matters that the state’s leading university considers jazz vital enough to assume the expense and headache of booking jazz artists, a process akin to corralling cats, for audiences who may or may not show up. If you want to make a lot of money, don’t schedule a jazz series.

A commitment from the university
Steven Rosenstone, the U’s vice president for scholarly and cultural affairs, told MinnPost that the Northrop Jazz Season will continue into 2008-09 and beyond.

Rosenstone is the former dean of the College of Liberal Arts, the U’s largest and most diverse college. During his 11-year tenure as dean, he provided critical leadership in developing the West Bank Arts Quarter. 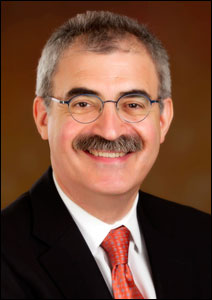 Courtesy of the University of Minnesota
Steven Rosenstone

He also co-chaired an advisory committee appointed by university President Robert Bruininks to determine the future of Northrop Auditorium, once the Carnegie Hall of the Midwest and now an underused behemoth with giant-sized problems.

In a Feb. 9 report to the U’s Board of Regents, the committee described Northrop as “a sacred, aging and crumbling icon in the center of campus that is only used for occasional, large gatherings.”

“Essentially what we said was that if Northrop cannot play a larger role in the academic, civic and cultural life of our university and this community, then turn it into a parking garage,” Rosenstone told MinnPost.

Structural stabilization and audience safety issues are already being addressed by the $21 million allocated in the university’s 2007 capital budget. From his newly created position, Rosenstone will oversee the transformation of the interior to a state-of-the-art facility with superior acoustics and sightlines.

He anticipates the main auditorium will be reconfigured from 4,800 seats to 2,800 seats, which happens to be the size of the acoustically perfect Carnegie Hall.

“I want the venue to be the right one for each performance we have,” Rosenstone says. “For some, the Ted Mann is best; for some, Northrop will be the right venue.”

Growing and strengthening
But the big news for jazz fans is that the series will go on. “The program has been one of the core pillars of arts producing we do at the U,” Rosenstone says. “It’s in no way in jeopardy. … The series has a bright and exciting future.”

His goals are to grow and strengthen the series. “When we bring a jazz ensemble or dance company or musician to the Twin Cities, we need to be very cognizant of what is special about something that happens at Northrop.

“Fundamentally, we are an educational institution. We are not and should not be about bringing somebody in and to have them perform, then get back on the bus and go to the next gig. … We’re not just selling tickets and putting butts in seats.”

Rosenstone would like to create residencies around artists’ visits, to partner and collaborate with others in the arts community, and to engage artists more deeply with the community as a whole. “Our job should not be duplicating what someone else is doing,” he says, “but making sure we are contributing to the overall ecology of the arts in Minnesota.”

Respecting a legacy
As the search continues for a new director, who will report directly to him, Rosenstone acknowledges that Schatzlein left a considerable legacy.

“I have enormous respect for what Dale built over the years,” he says. “This is not just seen in the quality of the artists who have come here, but the respect they have for Northrop and what Dale did. … We will be standing on Dale’s shoulders most definitely.

“Anytime there’s a tragic loss in leadership for an organization, as there was when Dale was taken from us, there’s always nervousness about what’s going to happen next. I get that.

“What the university did was first think very carefully about what the next steps ought to be. The commitment they have made to the complete restoration and reconfiguration of Northrop, the commitment we have made to strengthen our partnerships with the community to grow our arts program, and the search under way for the director should all be read as signs that there’s no back-stepping in the university’s commitment to the arts.”

Season tickets are on sale for the 2008-09 Northrop Dance Season. The Merce Cunningham Dance Company, the Royal Winnipeg Ballet and the Eifman Ballet of St. Petersburg are among the artists scheduled to dance on Northrop’s vast stage.

When will we know more about the jazz season?

“We’re still a couple months away,” Rosenstone says. “There’s a rhythm and cycle to various booking seasons, and dance traditionally is about three to four months ahead of jazz. … In the early summer, we’ll announce the jazz season with great fanfare.”

Happy Apple: Witty, ironic, creative, hilarious, surprising, melodic, cool. Mike Lewis plays sax, Eric Fratzke bass, Dave King drums and whatever else he can reach. (The Bad Plus is one of King’s many other bands.) Listen here and if you like, go early or you won’t get a seat. The Artists’ Quarter, 9 p.m. Friday and Saturday, April 25 and 26; 8 p.m. Sunday, April 27 ($12).

Jake Shimabukuro: The Hawaiian native plays jazz, folk, flamenco, classical and more on the ukelele. He is an accomplished young musician who has toured with Bela Fleck and Jimmy Buffet. Hear how beauteous the ukelele can be. The Dakota, 7 and 9:30 p.m. Sunday, April 27 ($20/$15).