If these names don’t ring a bell, you need to be reminded of the informal way we have always referred to them: Lady Bird Johnson, Pat Nixon, Betty Ford.

These three sequential first ladies from the era of the Vietnam War don’t immediately come to mind when we think of past presidential wives. Most of us probably think of Jackie Kennedy and — especially now — Hillary Rodham Clinton. Biographies have been written about every modern first lady, of course, but books about the Johnson, Nixon and Ford wives never reached blockbuster proportions.

That may partly explain why actress Elaine Bromka decided to focus on these first wives in her one-woman play, “Lady Bird, Pat & Betty: Tea for Three,” which she’ll be performing Sunday afternoon in the College of St. Catherine’s O’Shaughnessy Auditorium.

“For audiences, there’s an element of discovery in this play, and that is three women who were so very different from one another and — in some ways — different from what the public saw,” says Bromka, a seasoned actor whose name never seems to ring a bell, even though almost anyone will recognize her immediately as a performer they’ve seen … somewhere.

If you’re a fan of the “Law and Order” franchise on NBC, you’ve probably seen her from time to time. Soap-opera addicts will remember her as Stella Lombard on “Days of Our Lives.” She’s also appeared in a host of TV dramas and sitcoms and won an Emmy Award for her work in a TV drama special, “Catch a Rainbow.” Her stage work ranges from Broadway to regional theater, and she teaches acting methods at Smith College.

In fact, Bromka also has done takes on Jackie Kennedy and Hillary Clinton. Six years ago, she worked with impersonator Rich Little on his play, “The Presidents,” in which the two of them played eight chief executives and their wives, from Kennedy to Clinton. The experience inspired Bromka to develop a one-woman show of her own, which she ultimately co-wrote with playwright Eric H. Weinberger. 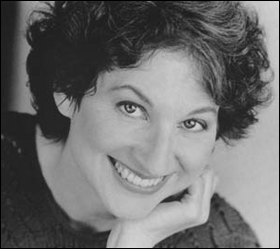 “When I wrote the first drafts, I came at it as a person who doesn’t care about politics,” Bromka says. “I care about the people who find themselves in positions they never expected.”

None of the three first ladies she portrays ever yearned for the roles they played, Bromka believes.

“As a young southern lady, Lady Bird once said, ‘I have grave doubts about politicians.’ Pat met Dick when they were very young — and then he went into politics. Betty got engaged to Jerry and then he said he wanted to run for office. None of them knew from the get-go what they were getting into.”

In her play, Bromka portrays the first ladies in historical order of presidencies. The portraits, all monologues, are linked by the commonality of experiences, though each woman has a different take on things — and, of course, a different relationship with her respective husband.

Of the three, Bromka says Pat Nixon was the hardest to research.

“I was told that Pat was one of the warmest first ladies who ever lived in the White House, but that it only came out in one-to-one relationships,” Bromka says. “She hated to speak in public — and, in fact, she never did. They called her ‘Plastic Pat,’ but when I looked at films of her at public events, I thought: Look at her face. It’s not plastic; she has the eyes of a watchful survivor.”

Lady Bird Johnson, who was still living while Bromka and Weinberger were working their play, declined to participate in their research. They did, however, rely heavily on help from Johnson’s youngest daughter, Luci.

“Lady Bird was always circumspect, but also so gracious,” Bromka recalls. “When we were done with the script, Eric sent her a box of soaps and she wrote him a note that seems so perfectly typical. She wrote: ‘Your lovely soaps are gracing my bathroom.”

Compared to the other two, Betty Ford offered high contrast. “Whatever she thought, she said,” Bromka says. “All three are incredibly endearing. I have such respect for all of them.”

For the past four years, Bromka has been fitting “Tea for Three” between other acting opportunities, dropping in on communities around the country for one or two performances that she often combines with seminars for acting students. At St. Kate’s, for example, she’ll give one performance Sunday afternoon and will conduct her one-day “Acting for the Camera” workshop on Monday for the college’s drama students.

“It’s a very flexible arrangement,” says Bromka, who lives in New Jersey with her husband, an arbitration attorney, and has two college-age children.

These days, not surprisingly, she says she’s always asked to comment on the upcoming presidential elections — particularly on Hillary Clinton’s candidacy. She says she tries to avoid partisanship, though she’s clearly thinking about voting to put a Democrat in the White House. The question was asked: Would she like it to be Clinton?