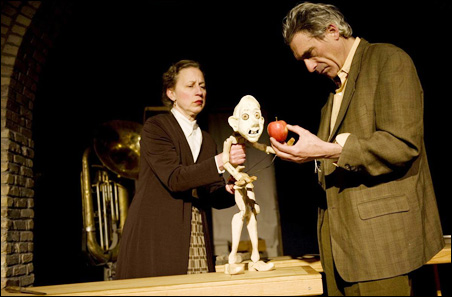 Photo by Lucas Saugen
“Dancing With a Contagion” is the latest work at Open Eye Figure Theatre.

For years, the Open Eye Figure Theatre has performed wherever possible — in theater spaces across the Twin Cities, “found” spaces and even in your driveway or backyard. Now, after years of itinerant work, Open Eye founders and creators Susan Haas and Michael Sommers have opened their own space in South Minneapolis.

And like the creative contagion in their latest show, they hope it not only helps them spread their art to a new audience, but also to provide a home for other artists to do the same.

“This space exists so we can do work like this,” says Haas after last Sunday’s matinee of “Dancing With a Contagion,” the latest show in their first season at their theater at 506 E. 26th St. “We did ‘A Prelude to Faust’ in this space in 1998 and thought it worked very well. We’ve had our eye on it and when we learned it was available, we jumped at it.”

Though Open Eye embraces a number of theatrical traditions, the “figure” part of its name is important: Much of the action is done with puppets. Sommers has worked in the Twin Cities for nearly 30 years — including work with the Guthrie, Jungle, Children’s Theatre and Theatre de la Jeune Lune — but he and Haas didn’t form Open Eye until 2000.

Plays aim at range of audiences
Their goal is to produce work for varied audiences. While the Driveway Tours (which return for the sixth year this summer) and the recent hit “Eleanor’s Cabinet” are aimed at all ages, “Dancing With a Contagion” is aimed at an older crowd. On a stage littered with dusty boxes, Rube-Goldberg-like contraptions and seemingly discarded instruments, Sommers, Haas and performers Kyle Loven and Angela Olson explore the events, ideas, mistakes and dreams that make up a life. Though the setting and Sommers’ somewhat crazed demeanor reminded me of “Krapp’s Last Tape,” the overall message is nowhere near as bleak as Beckett’s. 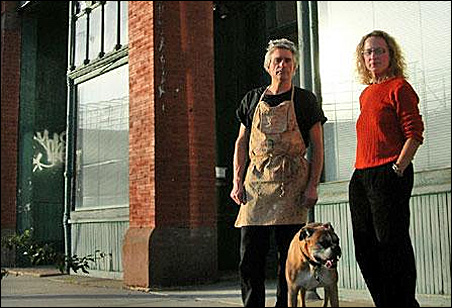 openeyetheatre.org
Open Eye founders Michael Sommers and Susan Haas and friend in front of their new space in South Minneapolis.

“Dancing With a Contagion” evolved over several years — it is Sommers’ first new work since “Elijah’s Wake” in 2003 — and showcases the collaborative nature of the theater, as the company worked with director George Sand (who has worked with Sommers for two decades) to mold the ideas into an hourlong show.

“I’ve done pieces of this over the last few years, but the last five weeks of rehearsals really brought it together,” he says. “In the last week, it started to have a life of its own. We’ve made changes even after it opened. And when you are dealing with objects and puppets, it will create some improvisation at every performance.”

A flexible space for ‘Open Eye’ and others
After the work of developing the space into a permanent theater, Haas and Sommers are pleased with the final result. The space is flexible enough to allow them to do the varied styles of theater that Open Eye presents, and it also can be a fresh place for other performers to do their work. Upcoming work includes “Two Chairs Telling,” a monthly presentation by storyteller Loren Nelmi and a CD-release party for Gary Rue’s “Show Up and Shoot: Various Artists, Vol. II” on April 28.

And even with “Contagion” finally up and on stage, the work continues for Haas and Sommers including the sixth “Driveway Tour,” where the company brings one of three half-hour family-friendly shows to neighborhoods around the Twin Cities.