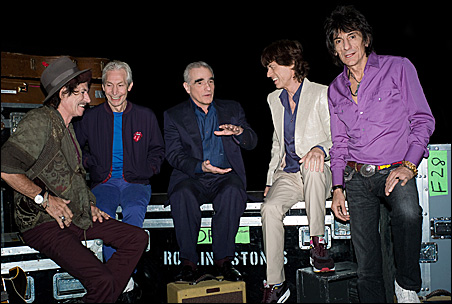 One of the Top 10 greatest hits of my lifetime of movie love came April 24, 2007, when I was lucky enough to be in a group of critics invited to spend an hour and a half in the Manhattan office of Martin Scorsese — film director, cinephile, cultural preservationist, natty dresser, high-speed talker, proud papa of a grade-school kid, and big-time Rolling Stones fan.

A year later, as Scorsese’s long-in-the-works Stones documentary “Shine a Light” finally meets its audience, what I remember of sitting in my hero’s inner sanctum is … well, not a great deal more than the band’s Keith Richards might recall of, say, the 1960s. (The film opens Friday at the Minnesota Zoo’s IMAX theater for an indefinite run.)

Fuzzy memories and undying gratitude aside, what I have is a nine-page collection of poorly scribbled notes:

• “framed posters of ‘Bad and Beautiful’ and ‘Sunset Blvd.’ behind big desk”

And one full quote of Marty’s, rather humbling in the context of my blurry recollection: “You have to preserve as much as you can.”

More than a dozen cameras
Immortalizing past and present seems the raison d’etre of “Shine a Light,” a film of the Stones’ pair of 2006 gigs at New York’s Beacon Theater, wherein Scorsese set up more than a dozen movie cameras — to preserve as much of the experience as he could.

In lieu of anything remotely akin to Scorsese’s mega-immersive audiovisual document, here’s another batch of the critic’s poorly scribbled notes, collected at KQ92’s promo screening at the zoo:

• “greatest sound mix of any film I’ve [ever] seen”

• “screen a million times bigger than a ViPod”

Ode to getting old and feeling young
Like all of Scorsese’s movies, “Shine a Light,” whose title is practically a working definition of cinema, keeps close and fascinating ties to a number of other films, including the immortal early 1970s Stones docs “Gimme Shelter” and “C.S. Blues,” as well as Scorsese’s own “No Direction Home: Bob Dylan” and “The Last Waltz,” to name a few.

In a different way, “Light” also reflects the dull surface of Scorsese’s previous film, which he was finishing at the time of the Stones’ Beacon shows. If “The Departed,” as its title seems to admit, was, Oscars aside, largely a dead end, “Light” appears as a miraculous resurrection, a film whose inspiring lament to getting old and feeling young could give it the name “The Eternal.”

Shot in part by “Shelter” co-director Albert Maysles (still a kid at age 81), “Light” illuminates the impressively creased and craggy faces of Jagger and company, along with their tighter features. (I don’t care what your sexuality is: If you don’t find yourself sneaking peeks at the frontman’s backside, you might as well be dead.)

Though puzzling us isn’t the nature of the game for this former devil (now he merely astonishes), Jagger’s new readings of golden oldies do complicate the likes of “As Tears Go By” — which I’ve finally realized is the perfect musical equivalent of Scorsese’s favorite Italian movie, Luchino Visconti’s “The Leopard,” wherein a senior sadly beholds life’s parade on his way out. Jagger first sang his ode to an older person watching children play in 1965, when he was young. Now he’s … not old, but it’s the evening of the day, indeed, and the effect is deeply moving.

At times, it seems wild horses couldn’t drag the coltish Jagger away from the stage. At other times, “Shine a Light,” whose final credits include a song-stopping memorial to the late Atlantic Records co-founder Ahmet Ertegun, reminds us that, as all good things must come to an end, that old horsepower will eventually prevail.

On that somber note, I’ll mention that Paul Arthur, an awe-inspiring film critic and teacher based in upstate New York, died last week after a short illness.

One of Arthur’s final articles can be found in the current issue of Film Comment (a magazine to which I occasionally contribute). It’s a burrowing look at “Shine a Light,” as dense and rewarding as any piece in the critic’s canon. Among its many invaluable insights into the film is this one: “Scorsese delivers a loving portrait in which, after years of being objects of ridicule as decadent grandpas masquerading as hungry rockers, the Stones act their age while seeming to transcend time’s inevitable slide.”

I didn’t know Arthur well, but we talked a few times, and he was a good friend of a good friend. Today I’m going to mail that friend of mine a care package.

As Scorsese says, and “Shine a Light” proves: You have to preserve as much as you can.