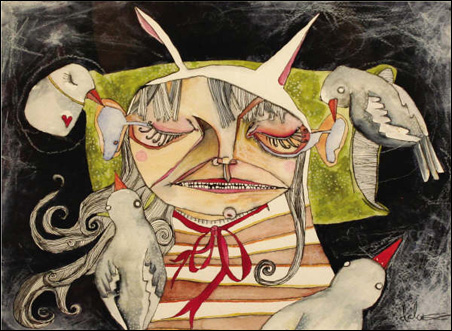 Courtesy of the Gallery at Fox Tax
DC Ice’s work is part of the “I Dreamed I Dream” exhibition at Fox Tax.

Trying to pick the best of the Northeast Minneapolis Artists Association’s Art-A-Whirl is sort of like trying to pin the tail on a donkey in a rainstorm after two too many.

More than 500 artists are exhibiting their handcrafted wares during the three-day event starting today and ending Sunday (May 16-18). On display will be textiles and sculpture, performance art and poetry, music and fashion, painting and pottery, and everything in-between. Whittling it down to a choice few is difficult and nearly heartbreaking. But if you’re looking for diversity and inspiration this weekend, these three exhibits are must-sees.

The story goes a little something like this: A group of friends discover a houseboat that was abandoned by a survivalist named Dennis “Kiddie” Cramer. He has left behind all sorts of things: candles, gas-burning lamps, logbooks, journals, ceiling maps, self-defense weapons, Homeland Security instructions, and detritus that are puzzle pieces of his mind — and of the viewer’s. What do the things left behind say about Dennis? What does his obsession with safety say about our own obsessions? About our own fears? And what does our desire to uncover someone’s life through their possessions say about us? Is it simply curiosity? Or a need to connect?

The artists at Creative Electric Studios have collaborated to re-create the story of a houseboat they actually discovered on the Mississippi nearly a year ago. In trying to find the owner, the “story” — and imagining who once lived there and how — became the art. “We tried to track down who really owned it,” says Jenny Adams Salmela, one of the 10 or so collaborators at Creative Electric. “But everyone we talked to had a different story.”

The story that the group re-created about the original owner is just as ambiguous. They left behind plenty of his (or her?) belongings in the boat, and re-created a handful of their own. Yet Adams Salmela doesn’t want to reveal exactly what came from the mind of the inhabitant and what came from the minds of the artists. “We like the idea of blurring real and fake,” she says. “We want people to feel like it was all originally there.”

Included as part of the installation will be safety filmstrips, found art objects projected onto the house boat, and discussions by “Dr. Richard Brinkman,” an expert on safety. White Map (featuring Zak Sally from Low) will be performing on a free-floating river pontoon on Friday night, and the Owls will perform on Saturday.

Emma Bert of Mplsart.com is guest curator for this exhibit featuring works by four young up-and-comers to the expanding Twin Cities art scene. In this show, Deuce Seven, Keith Eric Williams, DC Ice and Rudy Fig paint the angst found in the corners of dreams. The connecting concept is opposition: Each artist creates works that are simultaneously hopeful and sorrowful; childlike and tortured; sweet and melancholy; beautiful and tragic. 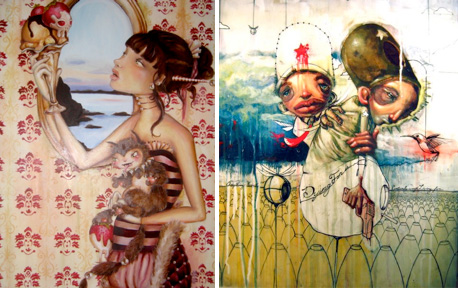 Courtesy of the Gallery at Fox Tax
“I Dreamed I Dream” pieces by young surrealists Rudy Fig (work at left) and Keith Eric Williams (work at right) are part of the Art-a-Whirl tour this weekend.

Like Fig, 25-year-old Keith Eric Williams is also inspired by the pop surrealism of the SoCal artists from the “lowbrow” movement. The subject matter is often dark and morbid — such as one where embryonic creatures look battle-worn — but the hues and wallpaper-like background-patterns create a delicate softness around the dark edges.

Curator Yuri Arajs is known for a couple things: He has discovered more local artists than nearly anyone via his now-shuttered Outside and Others Gallery. And he’s an intense, honest, cut-to-the-chase guy who takes his gallery seriously. Perhaps that’s why Arajs has been so good at discovering and promoting local talent.

Sadly, this show will be Arajs’ swan song. The exhibit at his Placement Gallery — a moving, pop-up art gallery that has been shown in Barbette, window displays and traditional gallery settings — celebrates his vision and the artists he’s worked with during the past decade.

So will this be the end of Arajs’ exhibits for good?

“Well, yes and no,” he says. “I am moving out of the country in less than two months. I am moving to the west coast of Canada. This show that I have up right now is kind of a curatorial retrospective, 20 artists that have shown here over the last 10 years. I am still going to try to do one show a year or so in Minneapolis. But I will not be part of the day-to-day arts world in Minneapolis. I am leaving it behind.”

Part of the reason? Health insurance. Arajs grew up in Canada, where universal health care is available, and he spent 13 years in Minneapolis. But he has been without health insurance for eight years. 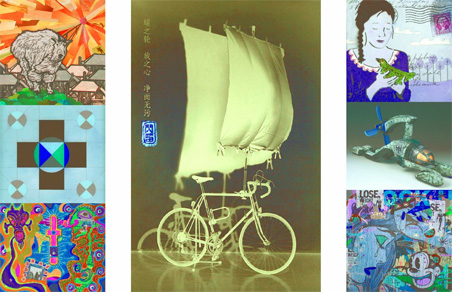 “I have loved it here,” he says. “I’ve been able to work with so many great artists. But in the end, I have to take care of myself. I’m in my 40s now and I can’t get health insurance. So, I’m going to move to a place where I can, where the grass is green all year long; you can see peacocks in the park. You know, you have to live your life. You have to live it as healthy as you can. And now is the time that I am going to focus more on my artwork and begin the second phase.”

Also at Placement Gallery, photographer Sean Smuda, who also works as a photojournalist for City Pages and others, will showcase some of his profound, dark, complex and perplexing images here. And artists Jennifer Davis and Amy Rice, who have become local favorites with their dreamlike imagery, will be showing some of their favorite works.

More information on the swirl of Art-A-Whirl events is available here.

Art-A-Whirl: so many worthy exhibits, so little time