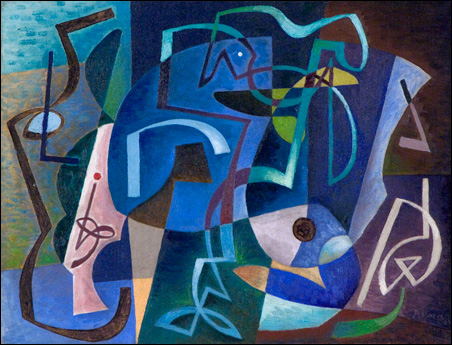 Minnesotans share a deep obsession with their history: The fact that lutefisk still exists — let alone is happily devoured if not worshipped — is testament to Minnesotans’ love of lore as well as their iron guts.

And you’d have to be living under a rock Paul Bunyan launched at the moon (among the rocks supposedly giving the moon black eyes) to not know about Minnesota’s sesquicentennial. With all of the chatter and activities planned this year, you’d think the anniversary marked the birth of the sun instead of the official statehood of the land of 10,000 lakes.

It’s in that spirit — a collective obsession with what brought us to this moment in the first place — that the varied collection of artworks at “By the People, For the People: New Deal Art at the Weisman” acts as a colorful lens into Minnesota’s past, one that reveals the beliefs, doctrines and industry that gave rise to the state during the Depression.

The exhibit features more than 100 pieces, including paintings of mines by Mac LeSueur, and prints of bridge workers by Arthur Murphy, all part of the Weisman Art Museum’s collection of nearly 2,000 New Deal works.

The show marks the 75th anniversary of the New Deal, and intends to be a companion piece to Minnesota’s sesquicentennial celebrations.

Weisman curator Diane Mullins says the pieces were chosen because they best represent Minnesota and the diverse talents of the time. Also, she notes, some pieces just looked cleaner. “To be honest,” she admits, “we didn’t even realize we had so much of this. We thought we had 1,000 pieces, but it’s double that. And so many of the pieces are in need of cleaning and restoration.”

‘Useful labor for unskilled women’
On a recent preview visit to the Weisman, workers were busy installing images and organizing the utilitarian art pieces in bins. These functional works were part of the New Deal program that created “useful labor for unskilled women.” The women were given tools and taught to create things like ceramics, tablecloths and table centerpieces. “Isn’t that just so funny?” Mullins says excitedly. “I mean, that’s what’s so great about this. The history that’s there, learning what the whole program was about and what came of it. It’s not just the pieces. It’s the history with it that’s just so fascinating.”

The government-sponsored Federal Art Program sought to create jobs for artists and inspire a civic-minded enthusiasm for a new Minnesota after the Great Depression. The result is a collection of images focused on big bridges, big arms and an even bigger bounty. The images are a celebration of what Minnesota could be under new government-issued plans, new ideas and new infrastructure that might just allay the pain of the Depression.

All works here were purchased with funds allocated to Minnesota through the defunct Federal Art Program (now the National Endowment for the Arts). The artworks are on “long-term loan” from the federal government as part of FDR’s Works Progress Administration created in 1935. Since the museum is part of the University of Minnesota, “a tax-supported institution,” the Weisman paid for only the materials used to create the WPA art; some pieces cost as little as $15. 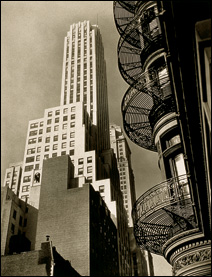 The original agreement between the WPA and state offices read as follows:

“As you know, works of art produced by the Federal Art Project are allocated to tax-supported institutions on the basis of their reimbursing the Federal Government for the cost of materials and other non-labor items involved in their execution. As soon as we have received the approved forms from out Washington Office, we will advise you as to the method reimbursement.”

And a 1939 loan receipt from the Minnesota office of the WPA agreed to the following requirements: “We herewith acknowledge receipt of the following works of art loaned to us by the Federal Art Project of the Works Progress Administration.  It is understood and agreed that the works remain the property of the United States Government and are not to be removed from the office or institution to which they are loaned.”

An art history
The pieces work as more of a pictorial history than they do an aesthetically unique and innovative collection. The regional works include black-and-white documentary photographs (images that birthed a style that prevails today), paintings of industry and labor (think Hulk-like virility and Paul Bunyan arms), social-realist images of the bounty of hard work (squash grew like dandelions, apparently), images of Minnesota and the U of M as it existed 75 years ago, and even surrealist and cubist images that are odd stand-alones in a theme that’s pro-work, pro-Minnesota and pro-New Deal.

Still, despite many of the artists’ pro-government perspectives, the WPA didn’t list any requirements for subject matter. The only stipulation was that the artworks were allocated for cost of materials, according to records. Yet the pervasive theme here is still strength, which is a result of post-Depression attitudes, the local WPA’s subjectivity, and to be sure, a bit of government-infused (but not required) propaganda.

The rare pieces that aren’t about strength — or Minnesota as a bearer of life’s rich pageant — reveal the disparate genres and influences of the time (Minnesota artists were influenced by Picasso, Dali, El Greco and more), and use every kind of medium, from ceramics to woodblock prints to watercolors and gouache.

But the most interesting pieces are the documentary-style photographs by Dorothea Lange, Russian artist Jack Delano and Marion Wolcott. Inspired by the hardships of the era and the photos of Walker Evans, who famously documented farm families in Alabama during the Depression, the images broadcast the continued hardship and alienation that befell men, women and children, and lay bare a truth about battles big and small that brought us to today.

What: “By the People, for the People: New Deal Art at the Weisman”
Where: Weisman Art Museum at the University of Minnesota
When: Now through July 27. Related programs include lectures, curiosity camps and civic dialogue events.
Phone: 612-625-9685
Cost: Free
Online