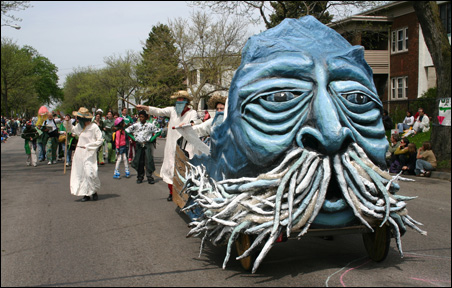 Photo by Gayla Ellis
The 2007 theme was Somos Agua (We are Water). This year it’s “A New Bridge: Infrastructure for the Future Beings.” Parade starts at 1 p.m. Sunday.

A quick look around In the Heart of the Beast Puppet and Mask Theatre, just before 7 p.m. on Tuesday evening, found every inch of the Minneapolis building covered: art materials, puppets and other works of art in progress, people of varying color, shape, and age dressed in frumpy, paint-splattered clothes.

Up on the stage, a young woman was cutting a sun from a piece of cardboard. Near the lobby, a father walked hand-in-hand with his son while, with the other hand, he held a bouquet of papier-mâché bumblebees perched atop long, wooden sticks. An old Schwinn bicycle, pushed to a far corner, was outfitted with a horse’s head, which had also been assembled from cardboard.

Soon after 7 p.m., the assembled pushed aside the clutter to form a circle. One by one, they introduced themselves: “Hi, I’m Bart; I need help painting butts,” said a man who was, in fact, flanked by enormous, pink plaster derrieres. “I’m here to help,” said a 40-something woman; same went for the shy, young man standing nearby. “She wants to be a mushroom,” said a mother, gesturing to her school-age daughter.

When her turn came, In the Heart of the Beast’s artistic director, Sandy Spieler, who’d rolled up the sleeves of her flannel shirt and pulled her long, gray hair back in a ponytail, introduced herself simply as “Sandy.” Just then, a little girl ran over and passed Spieler a papier-mâché piglet, scheduled to meet the world this Sunday afternoon at the 34th annual May Day Parade. Spieler closed her eyes and hugged the creature close to her chest.

Nary a logo in sight
I’m a longtime admirer of the annual May Day parade and ceremony, which starts at 1 p.m. Sunday (see route below). The event has a singular spirit: a joyous, countercultural welcoming of spring combined with a healthy dollop of sociopolitical commentary and shot through with transcendent puppetry, dance and communal singing.

But the affair is probably more unusual for what it lacks: namely, the presence of corporate marketers. Every year, a gaggle of neighbors and artists haul hundreds of hand-made puppets, banners, masks, costumes and floats down 10 blocks of Bloomington Avenue, in South Minneapolis, until landing at Powerhorn Park — with nary a logo in sight.

Meanwhile, families gather curbside as the occasional vendor hawks fresh mango-on-a-stick. In fact, in nearly 10 years of attending May Day, I’ve spotted but one sign of commercialization: The May Day program features ads for left-leaning businesses like Pizza Lucé and Birch Clothing and thanks such corporate sponsors as Peace Coffee and the May Day Café.

In any case, I’d never quite grasped the event’s inner-workings. I arrived on Tuesday evening, as participants made last-minute preparations, in hopes of glimpsing the people power behind the scenes. I also hoped to ask Spieler a few questions regarding May Day’s finances.

But it’s easy to get sidetracked in the presence of such eye candy. You couldn’t miss the two giant human skulls — made from lumber, clay and paint — near the center of the theater. During a short walkabout, I encountered the papier-mâché piglet’s companions: an entire “Future Bean Babies” contingent, including a baby moose, dolphin and orangutan in fetal positions. Shortly thereafter, I met Jazmin, a young woman constructing a corset out of old cereal boxes and VHS film. This year’s parade will feature an assembly of fashions made entirely from recyclables and trash, she said.

Eventually, I caught up with Spieler, who took me through the parade’s “storyboard,” which was posted in the theater’s lobby. This year’s theme was born in February, when about 70 artists and volunteers gathered at the theater to discuss topical, neighborhood issues. After that, In the Heart of the Beast artists would draw up the year’s storyboards.

Coming up with a theme
“The very first woman said she was afraid she was going to lose her housing,” said Spieler.

Others were haunted by images of the school bus that fell in the I-35W bridge collapse. “Those kids are from this neighborhood,” noted Spieler.

Together, these concepts informed the parade’s 2008 theme: “A New Bridge: Infrastructure for the Future Beings.” An early image finds autos teetering atop a “bridge of debt.” This refers, of course, to the I-35W bridge collapse, but also to our dependence on fossil fuels and a house-of-cards mortgage industry.

But the source material isn’t just doom and gloom: At that initial meeting, a little girl told Spieler she wanted to see “the body of the Earth carried through the streets.” And so she shall see it — near the finale, where the parade assumes a hopeful tone.

“This parade becomes a prayer in the street for safe passage through this time,” said Spieler in a statement that captured the event’s refreshingly un-21st-century (read: un-ironic) character.

As construction got under way in early April, and the theater became a giant art studio, the number of volunteers swelled; this year’s May Day program will thank almost 600 volunteers (as of April 19). Working on Saturday mornings and Tuesday and Thursday evenings through April, these folks scrapped together May Day’s colorful, larger-than-life spectacles using remnants, castoffs and donated art supplies. In other words, the parade has little in the way of cash resources.

This large-scale event has an annual budget of $260,000, 69 percent of which goes to pay the salaries of 16 staff artists and 19 event-day employees. The money also covers printing costs for the 40-page May Day program, and a chunk goes for city permits for police protection.

How does such an ornate, artistically solid event get pulled off? “I think some of it is just stubborn patience — the willingness to do it against financial viability,” said Spieler, who helped found the event in 1975.

Even so, Spieler isn’t shopping for a deep-pocketed title sponsor: “I can only speak personally, but the first year I did May Day I was about 21. I went then in the fall to the Renaissance Festival and I couldn’t do anything there because I didn’t have enough money to play the games,” she said. “I just vowed that this was going to be a day not about commerce but about community.” 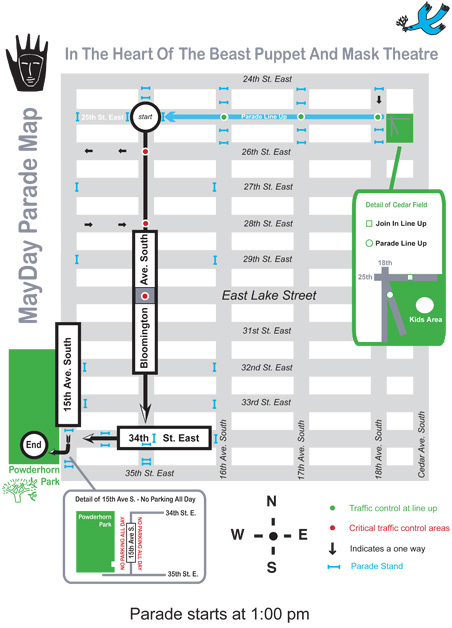