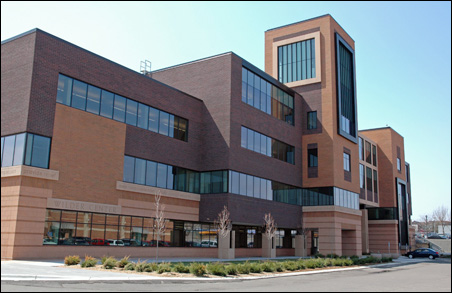 MinnPost photo by Marisa Helms
The Wilder Foundation’s new headquarters has its grand opening on Saturday.

The Amherst H. Wilder Foundation‘s grand, four-story compound in St. Paul’s Midway area is not just a new headquarters but a testament to its motto: “Here for good,” inscribed at the entrance of the new building.

Wilder, a 101-year old social service agency, chose a blighted patch of the city near University Avenue and Lexington Parkway and turned it into a bright, clean destination for the underserved, often-forgotten residents of St. Paul.

“We don’t ever give up on anybody,” said Wilder spokeswoman Teri Davids.

Wilder’s new $37.6 million center brings together most of the organization’s counseling, housing and education services. Wilder’s programs are extensive; from residential services for the homeless to violence prevention, job readiness, and counseling for adults and children.

Wilder also continues to own and operate 20 other facilities around St. Paul. Those buildings provide a range of services including programs for the elderly and several housing complexes. The foundation is still determining what it will do with the 13-acre campus it left in Frogtown. Parts of it may be sold or redeveloped. 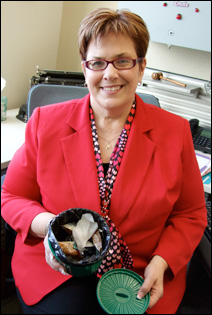 Wilder’s programs are funded largely through contracts with the city of St. Paul, Ramsey County and the state Department of Corrections.

Vitamin D in big supply
At the time of my building tour in mid-February, Wilder employees were just getting settled into the 99,953-square-foot space, so there were the usual new-home wrinkles to address — including negotiating the state-of-the-art European heating and cooling system, and the “copiers that practically cook your lunch for you,” as one Wilder Research employee quipped.

Wilder went to great lengths to create a clean and safe environment not only for its clients, but also for the 300-some employees who work there, she said. Consider these details: ergonomically correct chairs and tables, adjustable floor vents for regulating air quality, cubicle glass designed to store daylight so fewer light bulbs are needed.

And what’s with that itty-bitty garbage can kept at each person’s desk?

“It makes you think about how much garbage you’re producing,” said Davids as she willingly held out her tiny garbage can to showcase her day’s output.

Davids said the building will produce a 50 percent energy savings. The building’s design, she said, scored enough points to exceed the standard for gold certification for LEED buildings. LEED is shorthand for Leadership in Energy and Environmental Design, a nationally recognized rating system for environmentally sustainable design.

Design doesn’t please everyone
While many praise Wilder for occupying a site that was once an empty strip mall, there are some who, while glad that Wilder is staying in urban St. Paul are nonetheless disappointed with the architecture of the new center.

Michael Lander, a developer whose mixed-use projects include Excelsior on Grand in St. Louis Park and the West River Commons complex in Minneapolis, believes the building fails when it comes to good urban design and engaging the public.

“The automobile drives the whole design,” said Lander, noting the building is surrounded by parking lots and a five-story parking structure. The building also sits back from the street and doesn’t face either University or Lexington. Lander said the building is oriented more toward suburban, rather than urban, design.

“The front doors don’t engage the streets, and the design doesn’t give much back to the community in terms of the pedestrian realm,” he said.

Wilder spokeswoman Davids said the architects did the best they could with the lot, which, by the time Wilder broke ground in summer 2006, already was framed by other street-facing stores, including Aldi’s grocery, a White Castle and a TCF bank.

As for the parking, Davids defends the ramp as necessity for the 300 employees and thousands of visitors expected each year. Not to mention, “building up” on multiple levels is a requirement for LEED certification.

“Considering where we were before — on a hill in Frogtown where nobody could find us — we’ve increased our visibility about 100 percent,” said Davids. “We purposely built on this site because it’s on the 16 bus line, a very highly traveled line for many of our clients. And also it’s close to the proposed light rail line. We also have bike lockers, showers for staff, and we encourage staff to use alternative transportation.”

Davids said the site has been received well by Wilder clients. “Anything new can be intimidating to people in crisis,” said Davids. “Change is never easy. But the transition here has gone a lot smoother than many therapists thought.”

While the new Wilder Center may not be a success for some who advocate for higher density and a more urban design for the building and block, the facility does have some unique features that speak to the history of the neighborhood and the organization. For example, architects incorporated into the design the old buttresses from the Lexington ballpark where the St. Paul Saints played in the 1950s. The pitcher’s mound is there, too. The space will be used for relaxation and therapy with clients.

The building also incorporates “word bands” around the perimeter — phrases laid in brick  borrowed from the Wilder Foundation’s mission statement and Wilder family wills. The phrases include such sayings as  “create success,” “preserve tomorrow,” “practice compassion” and “transform lives.”

The Wilder mission is to be a safety net for people who have fallen through society’s cracks, and Kingston sees the foundation’s new home as a “continuation of good in the community, a place to serve more people, more effectively, for the next 100 years.”

New Wilder Center: Here for good, and then some