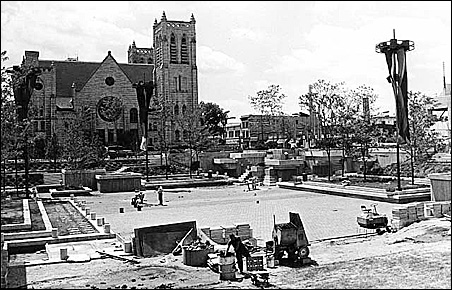 Courtesy of the Minnesota Historical Society/Photo by Steve Plattner
Peavey Plaza during its construction in 1975.

Some of Minnesota’s most treasured historic sites are threatened by wrecking balls and bulldozers, says the Preservation Alliance of Minnesota, which today released its 2008 list of the state’s Ten Most Endangered Historic Sites.

But perhaps just as dangerous a threat to these architectural and cultural touchstones is the damage done by time, the elements and neglect, says Preservation Alliance executive director Bonnie McDonald.

Eye of the beholder
The Preservation Alliance released its list at a press conference this morning at one of the sites on its list — Peavey Plaza in downtown Minneapolis.

The 33-year-old sunken plaza and amphitheater next to Orchestra Hall at 11th and 12th streets was created by renowned landscape architect M. Paul Friedberg. Its stark and linear modern design might not strike many as inviting, but McDonald argues that it’s worth preserving.

“By contemporary design standards, Peavey Plaza, some people might call it tired, they might call it old. Some people think modern architecture is very sterile and cold,” she acknowledges.

Even though the relatively new site won’t qualify for historic designation for another 17 years, McDonald says the time to start the public discussion of what should be done with it is now.

She says Orchestra Hall management is proposing an unspecified renovation of Peavey and that it’s not too early to begin a dialogue between the city (owners of the property), the public and Orchestra Hall on the scope of that transformation.

“Our challenge is to try to bring forth a vision of what that could look like. What would a renovation of that space look like that would be sensitive to the original design?” McDonald says.

“Unfortunately, they haven’t had the resources to invest in the property,” she says.

The church known for its stained glass and tall wood-shingled steeple has a structural problem with a wall. Repair estimates range between $150,000 and $200,000.

“The threat to this property is really a lack of financial resources to invest in shoring up that structural issue, but also as we look at how land values are going to change in the Frogtown neighborhood with the [proposed] Central Corridor [light-rail] line, which will be about a block away from this [site],” she says.

She says the site has been put up for sale and the concern is that a developer eyeing the proposed LRT corridor might “clear cut” the property.

“We’re not sure, so now’s the time to raise awareness of the historic value of the property.”

A gorgeous … jail?
It’s unusual to hear someone wax eloquent about the magnificence of a jail, but the St. Louis County Jail in Duluth, designed by nationally known architect and planner Daniel Burnham, inspires such talk.

Built in 1923 as a component of Duluth’s Civic Center complex, it’s on the National Register of Historic Places. It was used until 1995 as a working jail.

“It has been vacant ever since,” she says. “It’s starting to deteriorate from lack of use.”

The jail was on the Preservation Alliance’s list of endangered sites in 2004.

“It’s making a return, unfortunately, which we don’t like to do.”

She says St. Louis County officials are proposing demolition of the historic building, prompting the return of the site to the list of endangered sites.

A 1999 reuse study indicates the property is suitable for what is essentially recycling; reuse for residential, commercial, government and even storage purposes, McDonald says.

She argues that reuse of the building makes economic and environmental sense.

“If you think of sustainability alone and ‘green’ architecture, the greenest building is the building already built. We don’t have to expend resources; they’ve already been expended to create this building in 1923.”

Preservation in action
McDonald says people interested in helping save these sites — or participating in the public discussion of their reuse or renovation — should visit the Preservation Alliance website.

There you’ll find action steps for each property, as well as more detailed information and photos of each of the sites.

The release of the list of endangered historic sites is part of the celebration of National Preservation Month.